At the age of 30, Jay Baruchel has already been an actor for 19 years, eschewing Hollywood as a home base in favour of Montreal. In a departure from his film and television work, Baruchel is currently starring in a live theatre production of Sherlock Holmes at The Segal Theatre, where management has already extended the run and many performances are already sold out.

I interviewed Jay between rehearsals for his role as Sherlock Holmes, and was immediately struck by his intellect and passion for his family, his profession, Montreal and Canada. He’s an excellent communicator, as we saw in the Canada Reads sessions on CBC Television and Radio during that hugely popular week-long forum.

“My acting ‘career’ started when I was 12 years old. I fell in love with movies when I was a kid – and I knew that I wanted to be in the movies. My Dad enrolled me in once-a-week acting classes, and someone noticed me. I was cast in a Concordia student film, and for the last 19 years I have earned a living by acting in movies and television. I’m happy that in an industry where less than one-quarter of the actors make a living – I’ve been able to remain employed in my profession.”

“Employed” is a bit of an understatement. After a series of television and film roles from 1995 to 2003, Jay worked with Clint Eastwood, in Million Dollar Baby in 2004. The movie won an Oscar for Best Movie of the Year, and Eastwood thanked Jay in his acceptance speech. He went on to do more television work, including a role opposite Don Johnson in the WB’s Just Legal in 2005 – 2006. Television and film roles keep him working almost constantly. The odd aspect is that Jay’s management and agents have stated that to get regular acting work; ‘You have to live in Los Angeles, and more specifically Hollywood.’

“We have this once-a-year conversation about me moving to the U.S. But I’m stubborn, and I tell them that I don’t have to live in the U.S. to get roles. And the proof is in how much I work. Living in Montreal hasn’t limited my ability to work. I love where I live – my Mom is down the street and my sister is up towards the other end.” Continuing – Jay emphasizes; “I live in the best city and the best country in the world!”

“Somebody’s got to take a stand and combat the brain drain. We lose a lot of our best talent.” Citing how Montreal has become a music hub for rock, indie bands and singer-songwriters, he continues; “That’s how a creative community starts. Bands and musicians are now moving to Montreal from other parts of Canada because of the musical community that’s been created here.”

“My Mom’s family came from Nova Scotia and they were in the military, and I was raised to be a patriot. And, yeah, that story’s true – I do have a red maple leaf tattoo over my heart!”

Jay Baruchel represented Quebec in the 13th annual CBC Canada Reads competition broadcast live on radio and then re-broadcast on television in the evening. Jay selected Hugh MacLennan’s Two Solitudes, written in 1945 and clearly still relevant today. “It was incredibly daunting to be on that panel, to defend my book and to vote against others. I’m not super-comfortable in stressful situations, and here I was – going toe-to-toe with the other panelists. We all found it to be an emotional experience, and I woke up nauseous every day, knowing the stress that I would encounter on the show.” 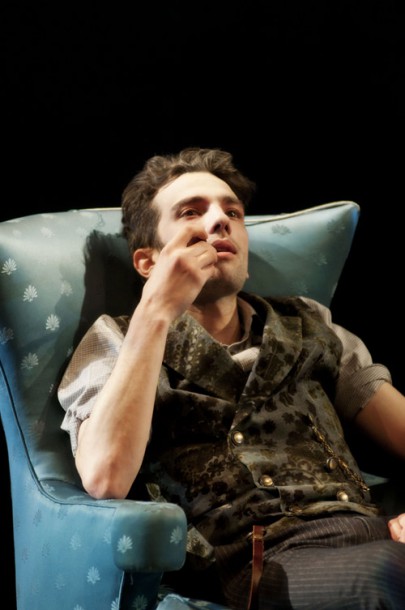 Radio and TV audiences had an opportunity to become better acquainted as the panelists stepped out of their professional comfort zones and opened themselves to the nation. Jay Baruchel, the guy from Montreal usually cast in a comedic role; demonstrated a formidable intellect, and a facility for articulate and passionate expression. It also took courage to select a book written in 1945 and whose subject material began in WWI. There was a potential that some panelists would have trouble with its relevance in today’s multi-ethnic Canada.

Jay’s 30 second opening statement on the last day was emotionally charged; “Few times in your life will reading a book be an act of civic duty. This is sweeping, elemental, patriotic stuff and it stirs the blood. You read this book and you will bear witness to modern Canada, and in doing so – modern Canadian literature. For history, for your country, for everybody that came before you and for everyone who will come afterwards, Two Solitudes is the book you should read.”

“We left Quebec when I was 5, and returned when I was 10 or 11; just in time for the 1995 referendum… I thought that by selecting Two Solitudes, I could serve my country, that whatever I could do to generate some patriotism would be a worthwhile contribution. Somebody’s got to beat the drum – apathy is a cottage industry in Canada.”

“I didn’t win – but I took some satisfaction the next day when Two Solitudes was the #1 seller on Amazon – probably selling more copies now that when it was initially published.”

Continuing on the theme of literature and the written word, Jay and I spoke about his current role as Sherlock Holmes in the play of the same name now playing at The Segal Theatre. “Live theatre is immensely different from movies and television. The goal of communicating truth to the audience is the same – but the means are different. My role at The Segal forced me to re-think acting and my approach. Film scenes are done in 5 minute segments – and I have to know 5 minutes’ worth of lines. For the play, I have a shitload of stuff to commit to memory! I’m on stage for two hours every night and twice on days when we have Matinee performances. To do this, I’m probably in the best shape I’ve ever been.”

“I’ve never been to a recognized acting school, but I imagine that live theatre is like going back to acting school. In film one develops shortcuts, but in live theatre you can’t do that. There are no filters; the audience is tight there – just a few feet from you.”

“People have worked hard and paid good money to purchase tickets to attend a live play. I’ve got to hold up my end of the bargain by doing my best to hold their attention, and take them with us during our performance.” Bravo!