Now in its 5th season, the jazz concerts have established a solid following at the Segal Studio

Described as “genre-bending” by the National Post, and “intrepid” by the Globe and Mail, Mark Fewer has performed around the world to critical acclaim as a classical violinist as well as a jazz musician. He is a dedicated chamber musician, jazz violinist, artistic director, and teacher. Since 2010, Mark has been featured on 8 new recordings, the most recent of which won the 2012 Juno Award for Best Contemporary Jazz Album. Changing Seasons, is a jazz violin concerto written especially for him by jazz great Phil Dwyer. Scored for big band, string orchestra and solo violin, the piece takes advantage of Mark’s unique abilities as both a classical violinist and improviser. 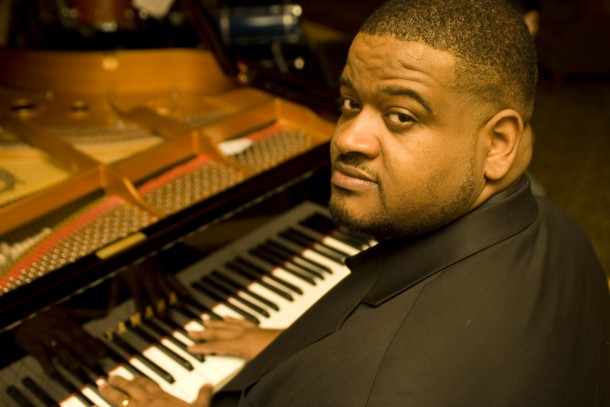 Taurey Butler, piano: Sunday, May 12 at 8 pm in the Studio

Originally from East Orange New Jersey, Taurey began studying piano at the age of seven. He loved playing, but by the time he reached the age of fourteen he found that the musical direction he was heading in was not fulfilling. During his last year of high school, a prescient teacher, who was also a distinguished percussionist, Barry Centanni handed Taurey a CD of Oscar Peterson and advised him to listen. He did, and from then on, he knew where he was going.  “I didn’t know a piano could do that!” he recalls and began to focus more on jazz studies.

Taurey attended Dartmouth College in New Hampshire, where he studied Japanese and majored in Electrical Engineering – he left with a BSc and BE and saw himself as, “a Japanese-speaking electrical engineer who loves playing jazz piano.” He returned to New Jersey to develop and grow as a musician and found himself attending jam session in New York. His powerful swinging style, dexterity and lyrical imagination were duly noted – and gigs started to come his way. Over time Taurey found himself playing clubs and festivals with various acts – and it was while playing at The Cotton Club and Swing 46 – that he was introduced to bassist/vocalist Eldee Young – the opportunity to work regularly with such a mentor was an inspiration. They played regularly in Singapore and at Bangkok’s prime jazz room, The Living Room as well as Hong Kong and Dubai. It was after Eldee’s passing in 2007 that Taurey made the move to Montreal – a city he that he had been very anxious to visit since learning it was Oscar’s home town.