London, Paris, Dublin, Berlin – they all bring out the wanderlust in me. One city does something to me that defies reason. New York. It doesn’t matter what time of year, there is something magical about it. Something otherworldly. It has a tremendous draw, certainly to this Montrealer.

The term “something for everyone” goes without saying, so to speak. Things out of the ordinary, like the museums: The Museum of Finance, The Museum of Biblical Art, The Museum of Sex, The Brooklyn Children’s Museum – a cornucopia of the life that makes up this wonderfully diverse city. A trip to New York without seeing the New York Historical Society Museum is simply not a trip to New York. It covers four centuries of history with photography, art and artifacts. Missing it is rather like missing a Broadway play – it’s just not done.

One of my favourite walks in the city – and it’s a long one – is from The Battery to Broadway. You’ll need good solid walking shoes. You’ll pass through the Financial area (full of impressive turn-of-the-century buildings), Soho, Chinatown, Greenwich Village, Chelsea and, finally, the Theatre District. Continue on, you’ll arrive at Central Park. Along the way, up and down the avenues and cross the streets, you will find restaurants, quaint and exclusive, trendy to chic clothing stores, the Old mixing in with the New. You can also swing over to Washington Square, where you’ll find outdoor chess in the park being played by anyone who dares, and, not far off, a super little restaurant called Flex Mussels on West 13th Street – decent pricing, of $19 to $25 for bowls of P.E.I. mussels, with prices rising somewhat in the menu, but the food is excellent. 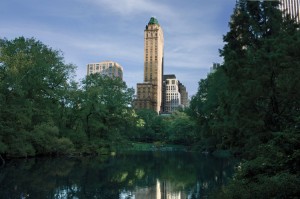 Choosing a place to stay in New York is not always an easy task. There are many with different price ranges. Pick carefully and wisely. Some are costly but don’t deliver and others are well worth the values offered.

On 44th Street, there is a grand old lady that is a must visit: The Algonquin Hotel. I was in my twenties when I first walked through her hallowed doors and I always make a point of dropping in there, if not for lunch, for an evening cocktail. What a famous hotel it is. Indeed, over the years, it has become known for its gatherings of the literary and theatrical famous. Columnists, editors, playwrights and critics. Out of those gatherings was born the Round Table, where sat, Franklin P. Adams, Robert Benchley, Heywood Broun, Marc Connelly, Edna Ferber, George S. Kaufman, Dorothy Parker, Robert E. Sherwood and Alexander Woollcott. The table is there – and it is round – with place settings and name cards, attended perhaps by the ghosts of what once was. One can only imagine the verbal sparring that occurred! It is said that Edna Ferber arrived at The Algonquin one afternoon in a new suit similar to the one Noel Coward was wearing. “You look almost like a man,” Coward said as he greeted her. “So do you,” replied Ferber.

The Algonquin Hotel is pricey, but offers packages that allow for a short term stay with inclusions, such as The Matilda, named for the hotel cat (there has been a cat in the hotel since the 1930s). It includes 10 % off the best retail rate, cocktails and a welcome letter from Matilda. There’s also the Katie Couric Package that includes a continental breakfast for two, a “Katie” show keepsake and tickets for two to the “Katie” show. And finally, the Broadway Experience, with a two-night accommodation in a queen room, two tickets to a popular Broadway show and two tickets to MOMA. 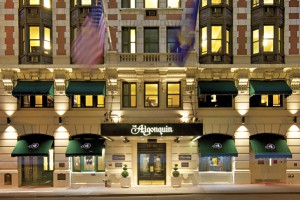 Not far from The Algonquin is Sardis. Ahhh, Sardis… where you are sure to wine and dine with the Who’s Who of the Broadway Theatrical world. Its walls are adorned with framed caricatures of entertainers past and present. Somewhat expensive in the evening, the lunch menu is within a decent range and at night, after a show, it is a super spot for dessert and a drink. That is when you are most likely to rub elbows with the ‘stars’. (It is understood, that you do not approach or bother them – do so and you are likely not to be admitted again.)

Broadway, one of the “most wonderful words in the English language”, (second only to the word Broadway Musical), extends from 40th to 54th Street, from west of Sixth Avenue to east of Eight Avenue, including Times Square. You’ll find plays, musicals, impromptu street performances, food trucks and artists vending their work. While “the concentration of over 40 Broadway theaters makes the Theater District one of the most well-known areas in the world,” – a walk around the area, through Schubert Alley, where actors sometimes gather for fundraisers, will introduce you to some of the most outrageous characters in the world. If you are a neophyte to the Theatre and don’t know which show to take in, a good plan is to check out Playbill.  It has the weekly returns for all the productions running and, without having to track down reviews; it is probably the best way to see which shows are garnering the most attention.

Talking about outrageous, remember that famous scene in When Harry Met Sally – the one in the delicatessen? That was Katz’s Delicatessen on East Houston Street. They’ve been around since 1888, and are known for their overstuffed corned beef and pastrami sandwiches. One meal there, you’ll remember it more for the food than for Meg Ryan‘s emoting.

How about a bit of urban barbecue along with some live jazz – you can get both at the Jazz Standard. You’ll find this little gem on East 27th Street, serving food that’s a cut above the other jazz bars. The owners of this bar do something you’ll rarely see anywhere else in New York – they enforce a quiet policy during sets so the music is heard. Also welcoming are the prices for the food, the most expensive on the menu being the ‘Texas Salt & Pepper Beef Ribs, Dry-Rubbed and Full of Smoky Flavor’ at $26.50. Not bad at all. On Sundays they present the Jazz Standard Youth Orchestra, their resident kids’ troop. For that there is a five dollar donation to benefit the Jazz Standard Discovery Program to encourage the connection between New York schoolchildren and the jazz art form. Bravo! 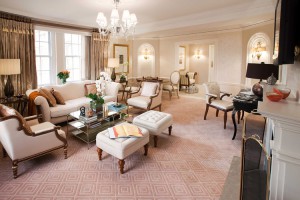 If you’re looking for the ultimate hotel experience, it would have to be The Pierre, on Fifth Avenue, overlooking Central Park. It recently underwent an extensive renovation of the rooms and bath interiors. Situated near some of the most exclusive stores in the city, Tiffany and Co., Bloomingdales and Saks 5th Avenue, it is a shopper’s paradise. Central Park, right across from the hotel, is where one can enjoy a day of horseback riding, biking and ice-skating (in winter). Rooms run $459 and up.

Another choice hotel is The Warwick on West 54th and Sixth. The hotel has a stairwell with walls resplendent with pictures of the famous who have stayed there. It has an extremely comfortable bar/lounge area called ‘Randolph’s’, named Best Hotel Bar by Citysearch.com. It has great cozy armchairs by huge windows that look out on to the Avenue of the Americas. The Warwick also features packages, one of the most popular being a romantic getaway, appropriately named All You Need is Love. It reflects the Four Liverpool Lads who stayed with them in the 60s. (Paul McCartney still drops by for a meal occasionally.) It includes a bottle of chilled champagne & chocolate dipped strawberries on arrival, a daily Full American Breakfast for two in-room, or a Full Buffet Breakfast in ‘Murals on 54’. (15% off, at ‘Randolph’s’ or ‘Murals’.) The rates start at $229. (Senior Rate)

Not far from The Warwick Hotel is New York’s famous Radio City Music Hall, The Museum of Television and Radio, Carnegie Hall, the American Folk Art Museum and Broadway, with great shopping areas all between two and four blocks away.

Let’s finish with a landmark historic New York Restaurant, The 21 Club. This iconic Orient-Express restaurant offers superb American cuisine. Whether it’s ‘Upstairs at 21’ or ‘Bar 21 and Lounge’, it serves up quality, history and an impeccable reputation. It has been named by Forbes as one of its four star restaurants for the 13th year, Zagat has it in its top 9 most popular restaurants in New York. And it was awarded the Wine Spectator Grand Award 2012, one of only eight restaurants in New York City to receive this prestigious award that year.  For those on their way to the theatre, it offers its Pre-Theatre Menu of 75 dollars for a three course meal, with a fine varied selection. Sitting on West 52nd Street it, too, is surrounded by theatres, museums and the city’s leading hotels.

New York! It welcomes you with open arms and a big heart. 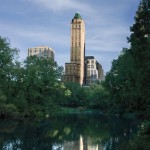 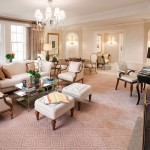 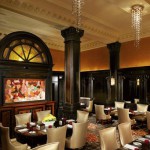 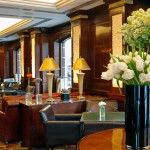 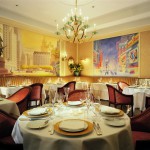 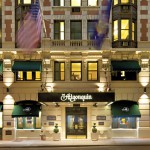 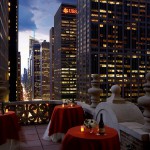