Framed by a clear, blue sky and bathed in the glowing mid-morning sun, the fortified town of Carcassonne evokes a scene from the pages of a pop-up storybook. The town itself lies hidden behind two concentric stonewalls which, as if created by an artist’s brush strokes, are accentuated by over 50 towers.

Henry James described this fairy tale vision, in his book A Little Tour of France, as “…almost too perfect, – as if it were an enormous model, placed on a big green table at a museum.”

Located in the Languedoc-Roussillon region of southern France, just north of the Aude River, the Cité of Carcassonne is the largest medieval town in Europe whose city walls remain intact. Although most of what can be seen today dates from medieval times, Carcassonne had already logged a long and storied past by that time.

A settlement near the city dates back to 3500 BC and by approximately 100 BC the Romans began fortifying the city. After the Romans ceded power, the construction of inner fortifications continued under the ruling Visigoths and by 725 the Saracens controlled the city.

It is during the Saracen rule that the legend of the Carcassonne name originates. 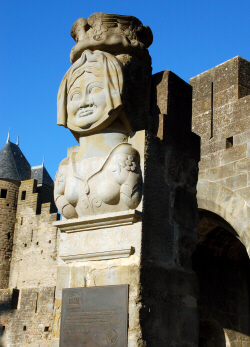 The bust of Dame Carcas,
a modern copy of the
16th century original, greets visitors at the main entrance
Credit: Julie Kalan

The Frankish forces from the north had already successfully driven the Saracens out of most of what is today southwestern France – when the King of the Franks, either Pepin the Short or his son Charlemagne depending on which version of the story you prefer, lay siege to the city. Following the assassination of the Saracen King Balaad, his widow Dame Carcas not only rallied the Saracen troops but also took up arms and proved to be a consummate opponent to the Franks.

For five long years the siege and battles continued, until her troops were decimated and the city was on the verge of starvation. In a last ditch effort to use cunning over prowess, Dame Carcas took the last of the wheat and fed it to the sole remaining pig.

Fattened and over fed, the pig was then thrown over the ramparts. The Frankish King was stunned. If the city still had enough food reserves to waste this animal, then obviously they could withstand the siege for many more years. Conceding defeat, the Frankish King lifted the siege and left with his soldiers. Dame Carcas ordered all the bells in the city to ring in celebration of this remarkable victory. When the retreating soldiers heard the bells, they shouted “Carcas sonne”. While, it is a great story as to how the city got its name, it is unfortunately no more than that – a great story. The name Carcassonne, in various reincarnations, dates back to pre-Roman times.

A large sculpture of Dame Carcas (a modern copy of the 16th century original) greets visitors at the main entrance to this almost impregnable city. Approached by a drawbridge spanning the dry moat and flanked by a pair of massive towers, the Porte Narbonnaise features sets of murder holes and portcullises. What were once menacing medieval defences are now filled with intrigue and exude an almost magnetic pull, bringing me quickly into the city.

Though small souvenir shops and cafes almost exclusively occupy all the ground floors of the buildings along the narrow street, they do not temper the beauty or diminish the lure of this ancient town that is still home to about 150 permanent residents and welcomes about 3 million visitors each year.

This magnificent site was almost lost in 1849 when, with the city in disrepair, the government decreed that the city be demolished. Thanks to a successful campaign to save Carcassonne, architect Viollet-le-Duc began repairing and conserving the city in 1853.

A Fortress within a Fortress

Following the main streets, it takes only a moment or two until I find myself standing in front of the Chateau Comtal (or Count’s Castle). The noble Trencavel family originally built the Chateau in the mid 12th century.
However, much of what stands before me dates from the 13th century, after the crusades against the Cathars, when the Kingdom of France absorbed the region. Among the defensive additions, protecting the entrance to the Chateau, are the semi-circular barbican and the dry moat – essentially creating a fortress within a fortress.

The sight of the Chateau, with the blazing sun reflecting off its pale coloured stones, is nearly blinding. My thoughts volley back and forth, from the romance of knights and castles to the perils of living in such volatile times. I would love to visit the museum inside the Chateau, but I have made the common mistake of allowing myself far too little time to explore Carcassonne. So, with great hope of returning one day, I continue on.

Let There Be Coloured Light 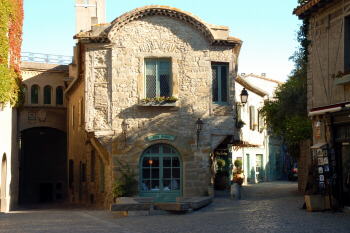 One of the quaint streets
leading from Place St. Nazaire
Credit: Julie Kalan

With the barbican on my right, I follow the rue Saint-Louis towards the basilica of Saint Nazaire. Work began on the church during the Trencavel period in 1096. However, under French rule much of the original structure was replaced with the new gothic style of building that was so prevalent in northern France. The original Romanesque nave was thankfully preserved due to a shortage of funds. Although, it is easy to see where one style of architecture gives way to the other, the effect is not jarring. In fact, the two styles seem to enhance the artistry of each other.

The stained glass, often thought to be some of the most beautiful in southern France, casts patches of coloured light on the austere stonewalls. Even with a steady flow of tourists slowly parading across the grey slab floor, the place is so silent that I almost feel the need to hush the beams of light piercing through the windows. 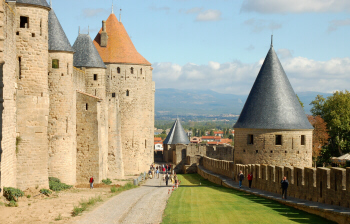 A wide bailey between the
inner and outer walls
Credit: Julie Kalan

Before leaving this incredible site, I have just enough time to explore a section of the outer bailey, which is the area between the two sets of ramparts. Encircling the entire town, the ramparts run for 3 km (1.85 miles), with the outer walls dating from the 13th century French rule and the inner walls dating up to a thousand years earlier.

One could easily spend hours here, deciphering the era of each section by studying the building techniques. With the sun now overhead, the walls appear to be the colour of a freshly baked croissant – a light golden brown.

A little bit further and to my left, I find a set a stairs that brings me to a lookout along the outer wall.

From this spot, I see the substantial depth of the dry moat that rings much of these outer defences. Looking over the crevice, vast fields of grape vines reach out towards the barely visible Pyrenees Mountains. The view is enchanting and the city is charming – but that should not be a surprise – all fairy tales end with “happily ever after.”

TRAVEL PLANNER
Carcassonne is 770 km (478 miles) south of Paris and 90km (56 miles) southeast of Toulouse. Thanks to France’s great rail links and the TGV, you can arrive in Carcassonne five or six hours after leaving Paris. All routes will require you to change trains in either Montpellier or Toulouse.

For more information on sights, accommodations and dining please visit www.carcassonne-tourisme.com and www.franceguide.com