It was once said that the sun never set on the British Empire. Britain’s great naval prowess helped build that empire and at Portsmouth’s Historic Dockyards you can visit some of the grandest ships of the day. An important Royal Navy base for centuries, Portsmouth is located along the southern coast of England.

Walking through the dockyards towards the grand HMS Victory, my eyes are drawn towards the three wide horizontal stripes that wrap around its hull. I briefly think to myself, “Why would a warship be painted with bright stripes?” Then I realize that these lines are not a cheery touch of colour, but a means to highlight the ship’s formidable armoury. All along the yellow ochre stripes are open gun ports, with a canon peaking out of each. 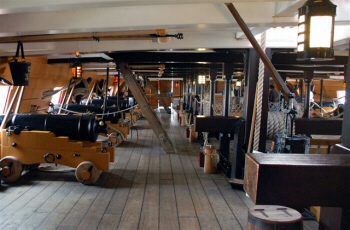 Stepping aboard the HMS Victory, I cannot help but imagine the days when ships like these faced pirates on the high seas. The Captain Jack Sparrow-effect aside, this ship boasts many of its own adventurous tales. From the American Revolution to the Battle of Trafalgar, this ship has not only witnessed but also made history.

The middle and upper gun decks resemble long corridors with canons placed every few steps. Even with a steady flow of people, the ship is so vast that you can explore at your own pace, and never be crowded by a wave of tourists. In fact, it is so quiet that I can hear every step of my rubber-soled shoes. It is a stark contrast to the scenes that once played out on these old, wooden floor planks. The crew of the HMS Victory consisted of over 800 men. While at sea, these men slept in hammocks, ate and worked literally shoulder to shoulder. During battle, they had to contend with the deafening canon shots and ensuing smoke, not to mention the barrage of enemy fire; and all this while facing the unforgiving seas. 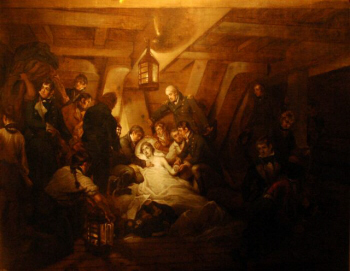 The Death of Nelson, oil painting by
Arthur William Devis

Both the quarterdeck and the orlop deck mark significant moments of the HMS Victory’s history.

During the Battle of Trafalgar, on October 21, 1805, the British fleet under Admiral Horatio Nelson’s command faced a combined French and Spanish fleet off the coast of Spain. On the quarterdeck, atop the ship, lies a plaque marking the spot where Nelson was fatally wounded by a shot fired from aboard a French ship.

Down below the water line, on the orlop deck, Nelson drew his last breath three hours after being shot and shortly after receiving the news that the British had won the battle. A painting by Arthur Devis, located here, depicts the Admiral’s last moments. 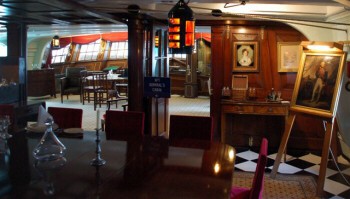 The Admiral’s quarters aboard the
HMS Victory Photo: Julie Kalan

Today’s visitors can enjoy the elegance of the Admiral and Captain’s quarters, see the hanging cots of the sick berth and marvel at the ship’s endless miles of rope in a safe and peaceful setting.

The only caution for both today’s visitors and Nelson’s crew is the risk of hitting your head on the low hanging ceilings. Being somewhat vertically challenged this isn’t a concern for me, but in the early 1800’s Captain Hardy’s 6 foot 4 inch frame would have had to stoop greatly on almost all decks.

Named in honour of Henry VIII’s sister, the Mary Rose warship spent much of the first half of the 16th century leading the English fleet. With a crew of over 400 seamen and soldiers, the ship was equipped with canons, guns and longbows. In 1545, while racing to defend the harbour from a French naval attack, the Mary Rose sank in view of the shore. Flooding from open gun ports took the ship and most of her crew down to a watery grave. The ship came to rest on her starboard side, which quickly filled up with protective silt; the port side succumbed to the eroding water currents. In 1982, after more than four centuries on the seabed, the starboard side of the hull was raised. 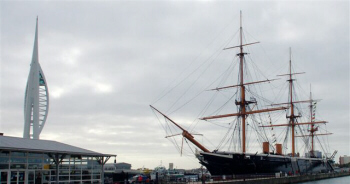 Beginning in the autumn of 2012, the preserved hull will once again be on view to the public. Until then you can see and touch some of the 22,000 wreck site artefacts at the Mary Rose Museum. Displays cover how the hull was lifted from the seabed, its canons and the ongoing conservation of the ancient, waterlogged timbers.

Most striking are the personal items that belonged to the unfortunate crew. The leather shoes, clothes, a comb (with a flea still stuck between the teeth), a backgammon set and musical instruments illustrate life aboard this once mighty warship. Amongst the numerous pipes and drums were pieces of two fiddles and a long lost ancestor of the oboe called the shawn. 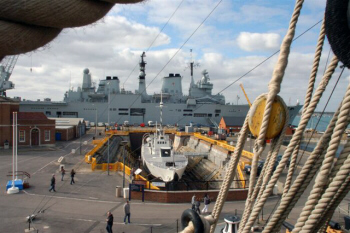 The M33 World War I warship in dry dock. The HMS Ark Royal, a decommissioned
aircraft carrier in the background.
Photo: Julie Kalan

You can soak up eight centuries of naval history at the Historic Dockyards, or if you prefer a more modern glimpse of Portsmouth, you can visit the Crow’s Nest atop the Spinnaker Tower and shop ’til you drop at the Gunwharf Quays. The graceful Spinnaker Tower has commanded Portsmouth’s skyline, since the fall of 2005. Resembling a ship’s mast and billowing sail, the tower’s three observation decks offer panoramic views of the harbour.

A shopper’s paradise, the Gunwharf Quays hosts 95 designer and factory outlets, including perennial favourites Ralph Lauren and Marks & Spencer When you have exhausted the stores (or the stores have exhausted you), there are still over 30 restaurants and bars, a nightclub, comedy club, multiplex and bowling alley to explore in this sprawling waterfront complex.

Easily reached by train from London’s Waterloo station, the Portsmouth Harbour station is located directly between the Historic Dockyards and the Gunwharf Quays. For more information on Portsmouth, please visit:
www.historicdockyard.co.uk
www.visitportsmouth.co.uk