The pink beaches and verdant green golf courses of Bermuda are a just two of the many aspects of this island of British civility that make the combination of a Celebrity Summit cruise with three days in Bermuda a fine holiday. The Summit is a mid-sized ship that Future Cruise Consultant DJ Cutler describes as a “quiet couples’ retreat”. Her description is appropriate, based our seven night cruise that included 3 days and two nights in Bermuda.

Celebrity Cruises has achieved an admirable record of having the highest level of repeat guests in the cruise industry. It’s a clear indication of satisfied customers who routinely book their next Celebrity cruise while still onboard. More than 50% of the guests on board our cruise were repeat customers who are members of the Celebrity Captain’s Club. While you may not be able to see all of Bermuda in three days – you can see and experience at lot of this tiny part of the British Commonwealth that is just 22 miles long and a 2 ½ mile span at its widest point. The ship becomes your all-inclusive hotel during your stay in Bermuda.

Launched in 2001 as a Millennium Class ship, Celebrity Summit has been “Solticized”; bringing her up to the standard of the newer Solstice class of ships. This means the addition of the Aqua Class healthy living options, with the accompanying the Blu dining room for Aqua Class guests, and the very popular Celebrity Life activities that include cooking demonstrations and classes, wine tastings, mixology classes and informative lectures. The Summit Captain and Officers engage in friendly competitions with guests on the dance floor, at the Texas Holdem table, volley ball in the pool and on the basketball court.

The voyage begins with 2 days at sea after leaving the Cape Liberty Cruise Port in New Jersey – an easy drive from Montreal or a 1 ½ hour flight to the Newark International Airport, located a short distance from the port. We enjoyed the drive down through the mountains of New York State, arriving several hours before the 5pm departure.

With 1,800 passengers and a crew of 950, the Summit is considered a mid-sized ship, and a refreshing alternative to the behemoths that accommodate 4,000 plus passengers. With the gangway open 24 hours a day, there are no long lineups for departure or onboard events and theatre performances. The ship’s décor is in a style of European modern elegance, with natural hues and butternut coloured wood-grain paneling. The Grand Foyer is a central atrium spanning three decks that is the focal point of many guest activities; and where you’ll find the Martini Bar, the Al Bacio Coffee Bar, boutiques, the Shore Excursion Desk, Front Desk, and the Future Cruise Consultant.

We’ll begin the tour of the ship with the Cosmopolitan Dining room – the chic main dining room that spans two decks, with a sweeping staircase and a spectacular window wall overlooking the ocean. Open for breakfast, lunch (except port days), and dinner; the Cosmopolitan has a menu that features a mixture of old favourites and daily chef specials. Select Dining enables guests to choose a dining time between 5 and 9pm as an alternative to the 6 and 8:30pm Main and Late Seating times. As usual, we enjoyed meeting new friends and sharing our stories from the day’s activities.

Alternative restaurants include Bistro on Five, a cozy and casual dining restaurant, Q-sine – a hip Asian fusion eatery where the menu is on a Mac iPad, and our favourite – The Normandie. We enjoyed an outstanding evening of French cuisine and impeccable service amid classic European décor inspired by the grand ocean liners of yesteryear. This elegant room contains artifacts from The Normandie, including bronze wall panels, mirrored columns and several lighting fixtures. The Normandie is also open on one day for lunch and another for High Tea.

The Oceanview Cafe a whole new meaning to the ‘buffet’ experience; offering a huge selection of dishes, floor-to-ceiling windows and seating areas divided into sections. 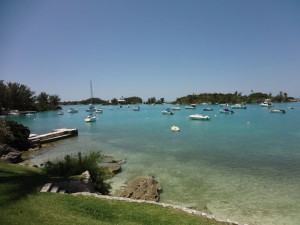 As impressive as the food consumption statistics are; your meal is the one that is important to you; and the chefs and line cooks take great personal pride in each dish they serve. It’s part of the Celebrity culture of stressing guest satisfaction. Executive Chef Rene Rojas explained prior to a hugely popular Galley Tour that promotions are based on achievement and merit; with the colour of neck scarves worn by kitchen workers showing the workers’ ‘rank’. Four month work tours are now much shorter than in the early days of cruising, making for much happier onboard staff, which in turn means happy guests.

The entertainment on board the Celebrity Summit takes place throughout the ship; in The Celebrity Theatre is a multi-million dollar state-of-the-art concert hall with nightly Broadway-style shows and visiting entertainers and comedians. Celebrity has elevated their commitment to the entertainment component of their cruise offering. While maintaining the big production shows, the company is bringing ‘name’ comedians and singers to augment their onboard casts. For example, we saw James Stephens III, a talented comedian, musician and impressionist who has performed at Carnegie Hall, The White House, The Apollo Theatre and has opened for Aretha Franklin. He is signed to play Bill Cosby in a movie about the mega-star slated for filming in 2014. It was clear that our fellow guests enjoyed this initiative.

54 Below is a program unique to The Summit that features Broadway stars currently performing cabaret shows at New York’s 54 Below – an immensely popular venue in the basement of Club 54. At 29, Alexander Yepremian is the youngest Cruise Director in the fleet; and he has an impressive singing resume himself, having performed and on Broadway in Miss Saigon; and as a featured vocalist with Celebrity before signing on as Cruise Director with The Summit. His contacts and knowledge of New York’s theatre community has been instrumental in securing the unique 54 Below arrangement. “This is not only unique to Celebrity – it’s unique to The Summit;” Alexander noted during our conversation. “Celebrity Summit is the only ship that is providing this show for our guests.” Upcoming performers include: Andrea McCartle from Annie, Anthony Rapp from RENT, Shoshanna Bean from Wicked, and Donna McKechnie who played Cassie in A Chorus Line. It’s a unique opportunity to see Broadway stars in an intimate setting, with Q & A sessions after the second performance. During our cruise, Broadway star Elizabeth Stanley (Million Dollar Quartet, Merrily We Roll Along, Cry-Baby and Company) performed her 54 Below cabaret show and received several ovations during the course of her performance.

Live music is performed throughout the ship; including a poolside calypso band, a cool jazz quartet for dancing, an a capella vocal group, solo musicians and the Celebrity Orchestra. With the encouragement of Cruise Director Alexander, the musicians put together an impromptu jazz concert that gave them an opportunity to set aside their charts and let loose, much to the great pleasure of the guests who filled the Rendez Vous Lounge to capacity. Augmented by The Crewners vocal group a few nights later, the same players nearly blew the roof off Revelations Lounge with a collection of songs by The Four Seasons, The Beach Boys and The Temptations – finishing up with a powerful Chicago medley. One of the great benefits of a cruise holiday is the availability of such high-calibre entertainment. 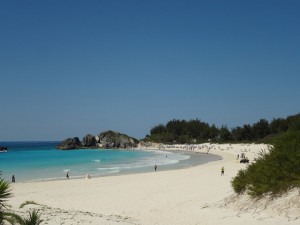 The spacious accommodations are first-rate, with flat screen TVs, in-room safes, mini-bars, ample drawer and clothes cupboard space. I recommend a balcony stateroom or suite if your budget permits. A morning coffee or an evening cocktail accompanied by the sound and smell of the sun-dappled sea makes for a lasting happy memory of a remarkable vacation. Bermuda is one of the world’s most romantic destinations – and a cruise onboard The Celebrity Summit can be an occasion for couples to reconnect and rekindle the romance – away from the commitments of family and work.
Bermuda is a near-magical destination, with its famous pink beaches, pastel-coloured homes, sailboats moored in quiet coves, and verdant golf courses. The people are genteel, and it is expected that you greet oncoming pedestrians with a smile and a “Good morning”. I could get used to that!

The Summit docks at The Royal Dockyards; a popular and well appointed cruise port that is a short ferry ride across the bay from Hamilton. The stone military barracks of yesteryear have been transformed into artists’ studios, glass-blowing workshops, boutiques and restaurants. It’s all just steps away from the ship.

The public bus system (even the busses are pink!) is excellent, safe and reliable. We took the bus to Horseshoe Bay Beach, one of the world’s finest. En route – we passed through a few small villages, past quiet coves and the magnificent Fairmont Southampton Princess Resort and Golf Club. Using the ship as your all-inclusive hotel is a terrific and economical way to visit Bermuda. Bon Voyage!

The Celebrity Summit sails 7 day cruises to Bermuda from Cape Liberty Cruise Port in New Jersey. There is ample and secure parking right at the pier for approximately $133, including taxes. We drove down from Montreal, leaving at about 6am and arriving at 1pm (even after a few missed turns that required doubling back a few times) – in time for a relaxing Summit lunch. It’s a pleasant drive on 87 through the mountains in the huge New York State Park. All Aboard is at 4pm for the 5pm departure, and we had plenty of time to spare. Pre and post cruise New York hotel packages are available. We met people we knew from Montreal and a few we didn’t know from Ottawa.

The Summit sails to Bermuda through to the end of August before a series of 14 night Canada-New England cruises in September and October. Beginning in November, she will sail 7 night Southern Caribbean cruises from San Juan, Puerto Rico until April 2014. The itineraries are alternating, and many guests book a two week cruise to take advantage of the different ports of call. One airfare – two cruises.

For information and reservations, contact your travel agent, visit www.celebritycruises.com or call: 1-800-647-2551. 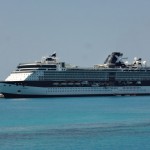 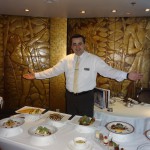 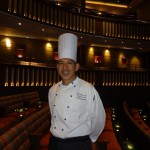 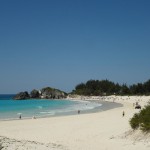 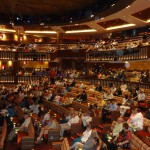 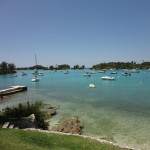 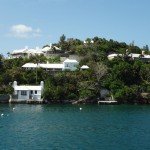 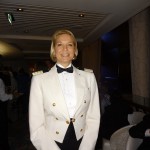