Growing up in Montreal’s East End in a family of modest economic means, it seemed unlikely that he would attend university in Detroit, Michigan. Yves would then embark on a career in the Travel Industry, holding senior management positions with American Express and Transat Holidays before taking on the role of President and CEO of Tourisme Montréal. Today, the youthful and energetic Yves Lalumière leads an enthusiastic team to market Montreal to the world.

“I felt that Montreal deserved to grow on the North American and international tourism scene. I believed that we had more to show to the world.”

“With my mom and dad, my brother Alfred and I grew up in a series of basement apartments and neighbourhoods in what is now referred to as Le Plateau, Rosemont and Villeray. It seemed like we moved almost every year. My dad worked in the CN yards, and then got a job as a baggage handler for Air Canada.” That job at the airport proved to be pivotal for young Yves. “It was through my dad that I started to learn about travel. I started collecting pictures of airports around the world. I was fascinated that people would come from different place in the world to Montreal. I decided at a young age that I just wanted to be in that business.” 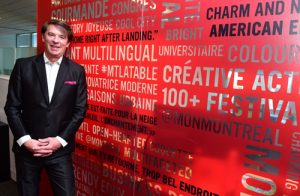 After a professional career in the Travel Industry, Yves states; “Travel makes you richer… you acquire knowledge every time you travel.” It would be a few more years before young Yves could follow his dream; and it would be through sport that doors opened for him.

“I played baseball as a teenager, and I was good enough to make Team Quebec. We travelled across Canada to compete against other teams, and it was a great way the see this country. Canada is a fun country to live in. I eventually made the Canadian team.” Through a baseball scholarship, Yves was able to attend university in Detroit, Michigan, where he studied Business Management with a specialty in Tourism. Yves finished his Bachelor of Administration at the Université de Québec a Montréal.

After graduating, Yves immediately went to work for Quebec Air. “I worked there for two years before having an opportunity with American Express Travel, where I was in charge of fifteen offices throughout Quebec.” Yves excelled in his responsibilities for the Quebec market, and the company invited him to move to Toronto and take on the responsibility for business travel in the Ontario market. “Part of my job was to improve industry relations with hotels and airlines, and to represent Canada internationally. I also negotiated the travel account for the Canadian Government and National Defense, which combined represented $500 million for American Express Travel.”

“I enjoyed my time in Toronto, and my twenty years at American Express was a fantastic school for travel marketing.”

While working for American Express Travel, Yves had established a sterling reputation in the Ontario and wider Canadian travel industry. In 2006, Transat Holidays reached out and Yves accepted the challenge to manage their stable of various travel agencies across Canada, which included well-known brands such as Marlin Travel nationally and Club Voyages in Quebec. Yves demonstrated his talent through a succession of rapid promotions during his tenure at Transat Holidays. He started as a VP in 2006, was promoted to be VP of a larger division in 2008, earned greater responsibility and another promotion to VP in 2009, and then to President of Transat Distribution in 2011. “This was a big step for me, because I was responsible for a network of six hundred and fifty agencies across Canada. Visiting the offices and meeting the personnel was a second time for me to learn about Canada. ”

In 2013, Yves answered the call to take on the job of President and Chief Executive Officer of Tourisme Montréal. “I felt that Montreal deserved to grow on the North American and international tourism scene. I believed that we had more to show to the world. I wanted us to be more connected to the world, and to improve our relationship with Air Canada. We increased the number of international cities with direct flights to Montreal, making it easier for people to get here. This is an advantage for tourism and organizers of business conferences.” 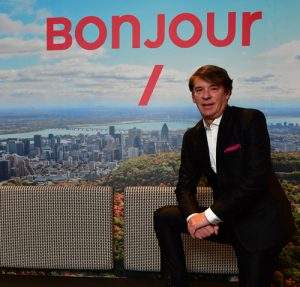 For Yves, marketing Montreal to the rest of the world is a labour of love, backed up with an encyclopaedic knowledge of the city’s strengths. “Montreal is the cultural capital of Canada. In addition to the world famous Montreal International Jazz Festival, Just For Laughs and the Formula 1 race – we have over one hundred festivals every year, most of which attract tourists as well as bringing Montrealers to our downtown.”

“Expo ’67 brought culinary influences from around the world, and today we have 4,000 restaurants in Montreal. It’s been said that Montreal is the playground of Canada, and I’m happy with that!”

“Montreal is #1 in bringing international events to Canada, such as the recent United Nations COP 15 Conference on Biodiversity. We have four circuses that make their home in Montreal – including Cirque du Soleil which has achieved enormous worldwide success. The National Circus School is also headquartered here. The Moment Factory is a world-class special event organization who has a couple of Super Bowl halftime shows to their credit. We have 1,000 parks in Montreal – and of course our signature park – Mont Royal. The Ring at Place Ville-Marie is already the most photographed location by tourists and Montrealers alike.”

“Montreal will be hosting the World Figure Skating Competition in 2024.”

“Personal and business tourism bring in $4 Billion to the Montreal economy every year, much of it from the U.S. and international visitors. We have 11 million visitors every year.”

“The Montreal Museum of Fine Arts is a world-class museum and we have other unique museums like Pointe-A-Callière, The McCord and Chateau de Ramezay. If it’s been awhile, we encourage Montrealers to re-visit these terrific institutions.”

“On the educational scene – Montreal has seven universities, and of course the students and their visiting families bring a lots if tourism business to our economy as well.”

“Montreal is the #1 destination in North America for Tourism Sustainability and Community Involvement.” In practical terms the objective is to foster… the coexistence of residents and tourists is encouraged in a concern to harmoniously integrate tourist flows into local dynamics. Sustainable tourism aims to create a smart, financially prosperous, diverse and sustainable tourism sector. (Source: Tourisme Montreal)

Continuing on the strengths of Montreal’s position in the tourism marketplace, Yves adds; “Personal and business tourism bring in $4 Billion to the Montreal economy every year, much of it from U.S. and international visitors. We have 11 million visitors every year. Our Montreal hotels have an inventory of 24,000 room nights, and we used half of them for the COP 15 Conference. We have the largest inventory of Air B&B accommodations in Canada.”

“An important part of our success is that Montrealers are really welcoming to visitors. We hear many stories about how visitors received directions, suggestions and recommendations from Montrealers they met on a sidewalk, or in a restaurant.”

“In terms of our current revenues, 2022 has surpassed pre-Covid 2019, and we’re projecting a 4% annual growth over the next 25 years. The Travel industry is growing at a phenomenal rate. By 2035 the number of aircraft in service worldwide will double. We have emerging middle classes in population dense countries like India, and these people will want to travel, just like the Chinese market has brought millions of new tourists to Western countries like Canada.”

As our conversation draws to a close Yves adds, “I have a great family, and they have been supportive all through my career. I like to see where I’m going – and they have always been there for me. My kids are 28 and 31, and I tell them ‘It’s your turn to go out and influence the world.’

For his own future, Yves enjoys his role at Tourisme Montréal and has plans to lead the city and its many partners into what he considers will be an exciting time in the worldwide Tourism Industry. Bravo Monsieur Lalumière!