A breathtaking homage to the power of air.

Great for all ages, Air Play creates beauty and inspires laughter across cultures and continents. No translation necessary, Air Play has played from the southernmost opera house in the world in Chile, to London’s Royal Festival Hall, Melbourne’s State Theatre, Shanghai’s Grand Theatre, and continues to tour.

Air Play is a visual poem, using no words, and brings to life the very air we breathe.

“A joy from start to finish” – Sydney Morning Herald (Australia) 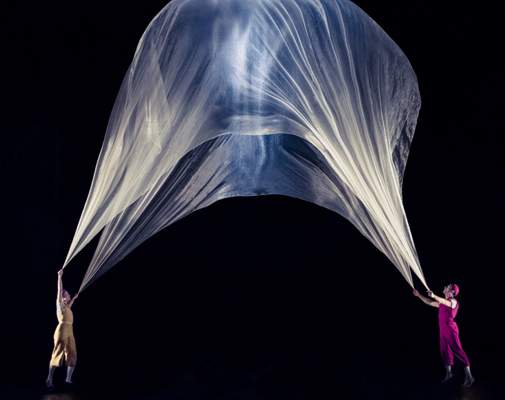 Acrobuffos from New York City is the international touring physical theater company of Christina Gelsone and Seth Bloom. Known for their stunning visual aesthetic and non-verbal comedy, the Acrobuffos have worked in 29 countries across a wide range of venues from city streets to circus tents to elite international theaters. Their unique shows have been called “inspired and finely crafted” by the Sydney Morning Herald, “rare gems” from Manchester Theater Awards, and “hardly your average clowns” from the New York Times.

Using an intense hands-on research and development process, Seth and Christina often take between two to five years to make a show. Responsible for many elements of their productions, they wear many hats, as playwrights, prop builders, costumers, set makers, sound designers, and ultimately as the performers. With shows touring for years and performed hundreds of times, the Acrobuffos are valued world-wide for their poetic use of everyday objects, original storytelling, warm-hearted themes, and guaranteed laughter without using language. Their accessible shows work across a broad spectrum of cultures, ages, neurodiversities, and economic classes. They have been seen at the elite Sydney Festival, Mexico’s famed Cervantino Festival, the Royal Festival Hall in London, and Singapore’s Esplanade as well as competing at the prestigious Wuhan International Acrobatic Art Festival of China and headlining the 35th season of the Big Apple Circus.

The schedule includes both matinee and evening performances.
Recommended for ages 5+.

To purchase your tickets visit: www.tohu.ca

*Please note: Severe latex allergy
Please be aware that latex balloons are used on stage and in the audience for this show. We do not recommend purchasing tickets for these performances if you or a family member is allergic to latex.