The Canadian Premiere of 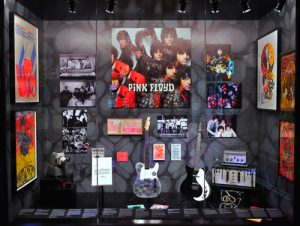 Canada is the sixth country to host The Pink Floyd Exhibition: Their Mortal Remains. The title is a lyric from Nobody Home, a song on The Wall, which reads “I’ve got a grand piano to prop up my mortal remains”. This critically acclaimed major retrospective of Pink Floyd, which had their music and the impact the band had on art and culture had its hugely successful debut at London’s prestigious Victoria and Albert Museum in 2017. The exhibition has subsequently travelled to Italy, Germany, Spain and the United States attracting over 500,000 people and will now take residency in the cultural hub of Montreal. The Arsenal Contemporary Art Montreal, an art centre located in the heart of Griffintown, is the perfect space for people to journey through Pink Floyd’s storied history. From their legendary albums to their ground breaking concerts, timeless themes, cutting edge design and surreal landscapes that evolve throughout the Exhibition, this is an opportunity to dive deep into the creative force that is Pink Floyd.

As the first location outside of Europe and the U.S., Montreal was selected as the ideal city to host the exhibition considering the band’s rich history with the city, spanning 50 years, having performed several legendary shows here between 1971 and 1994. The July 6, 1977 show was both the first and highest attended concert ever at the Olympic Stadium with 78,322 spectators. It’s also steeped in lore having directly influenced their legendary double album, The Wall.

“It has always been our wish to bring The Pink Floyd Exhibition to Montreal since before its 2017 London premiere. The Montreal audience has always connected with the creativity and sound of Pink Floyd and I am so pleased that we are finally able to present it here at Arsenal” said Michael Cohl, Executive Producer and Canadian Promoter of Pink Floyd. 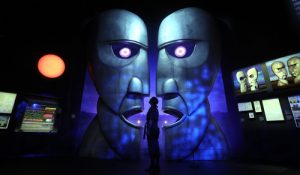 Guy Laforce, General Manager of Arsenal Contemporary Art Montreal, “We are particularly proud of our collaboration with the S2BN group, who have allowed us to host this exhibition in Montreal, the only Canadian city that will have the opportunity to present this amazing project. Pink Floyd has left its mark on many generations of fans around the world and it is a great privilege that Arsenal can contribute to consolidating the role that this band played in rock music history. People will have the pleasure of experiencing music, design and innovation all at once and fans will be left speechless at the depth and breadth of the historical items they’ll encounter here.”

The Pink Floyd Exhibition, curated by Aubrey ‘Po’ Powell, who worked with the band across many of their most famous album covers and works of art collaborated closely with Nick Mason from the band.

The exhibition features over 350 artefacts collected over the band’s extraordinary career. It is an audio-visual, sensorial journey through more than five decades of one of the most iconic groups, and a rare glimpse into the world of Pink Floyd. The exhibition is a collaboration with designers Stufish, entertainment architects and the band’s long standing stage designers.

Each chapter of the Pink Floyd story is represented, with objects and artefacts displayed, many unseen before the exhibition and all which have played a part in creating the sound and experience that became Pink Floyd. There are hand written lyrics, legendary musical instruments that true fans have heard whispered about, letters, original artwork and many of the stage props from the various albums and tours from a band that made musical history. Some of these items have long been held in storage facilities, film studios and in the personal collections of band members before being ‘dusted off’ for the exhibition. 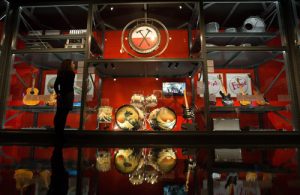 From the entry point into The Pink Floyd Exhibition the visitor is immersed in Pink Floyd’s world. They will find themselves transported to the band’s beginnings in 1967 on the underground scene in and then take a chronological trip through Pink Floyd’s history, connecting with music, art and design, sound technology and live performance via landmark albums such as The Dark Side Of The Moon, Wish You Were Here, Animals, The Wall and The Division Bell.

These artefacts plot both Pink Floyd’s development as a spectacular live band and the broader social, cultural and political threads which ran parallel to their music. Any student of design or art will rejoice in surrounding themselves with the stories behind, and the alternative versions of some of the artwork from the ateliers of the band and their collaborators, including Aubrey ‘Po’ Powell and the late Storm Thorgerson’s studio ‘Hipgnosis’ and Stufish. Pigs fly, sheep parachute, megaphones float through the air and a brave new world of art, music and psychedelia crash onto the airwaves and stages of the world. Pink Floyd fans will see and touch the lifetime of memories that make up their sonic and visceral rock
music odysseys.

Who better to lead us through the creative history of one of the most ground-breaking musical groups of the era than the music and the voices of past and present members of Pink Floyd, including Syd Barrett, Roger Waters, Richard Wright, Nick Mason and David Gilmour, talking about their experiences and musical experimentation via an intuitive audio guide system and culminating in a re-creation of the very last performance of David Gilmour, Roger Waters, Richard Wright, and Nick Mason.