Enjoy a magical mix of culture, hospitality and charm on this 7-day cruise

I open our stateroom’s veranda door to the surprising sight of a giant fiddle on the pier. Its glossy curves, soaring 18 metres into a grey sky, are graceful against a backdrop of squawking seabirds, autumn foliage and lapping waves. Dramatic decor at the Dining Room on the Nieuw Statendam
Photo: Michele Peterson

It’s morning at the Port of Sydney on Cape Breton Island, Nova Scotia and Day 4 on Holland America Line’s 7-day Canada and New England Discovery cruise from Boston to Quebec City on the Nieuw Statendam. This mid-size cruise ship is 296 metres long and accommodates 2,666 passengers in 1,377 staterooms.

It’s not until later, when I meet up with tour guide Simon McKay, that I learn how the Giant Fiddle came to be. The Big Fiddle is a striking sight on the Sydney waterfront next to the Joan Harriss Cruise Pavilion
Photo: Destination Cape Breton

“Traditional fiddle music and ceilidhs (dance parties) have been the heart and soul of our community since Scottish immigrants began arriving in Nova Scotia in the 1700s after their defeat by the British in the Battle of Culloden,” he says. “They came seeking freedom and were drawn to Cape Breton because its rolling hills reminded them of the Scottish Highlands.” 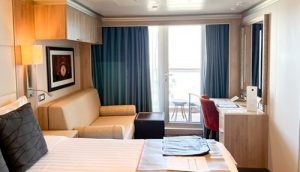 For us, a day in Cape Breton does feel a bit like stepping into another country. We spot street signs in Gaelic, Celtic shops selling tartan and cafés with Scottish oatcakes on the menu. There’s the signature sound of fiddle music (and a dram of whisky) at every turn.

Our journey – which includes ports in Boston (Massachusetts), Bar Harbor (Maine), Halifax (Nova Scotia), Sydney (Nova Scotia), Charlottetown (PEI), Quebec City (Quebec) – is an opportunity to experience a range of distinct cultures without the need for a long overseas flight.

Holland America has one of the longest cruise seasons for Canada and New England which also means we’re able to catch some of the east coast’s famous fall colours.

Our experience begins in Boston, Massachusetts where we overnight at Fairmont Copley Plaza in the Back Bay Historic District before embarkation. A hub for heritage lovers and shoppers alike, the neighbourhood’s leafy streets are lined with red brick brownstones, art galleries, boutiques such as Chanel, Valentino and Cartier.

Next up is Bar Harbor, Maine founded in 1763. In the morning mist, it’s easy to see how the region’s rugged landscape of craggy granite rocks, forests, mountains and coastal islands inspired 19th artists such as the Hudson River School of painters who portrayed themes of discovery, exploration and wilderness. The romanticism of their vision of northern New England drew wealthy elite such as J.P. Morgan, the Vanderbilts, Astors and Rockefellers who summered in mansions, socialized at yachting parties and explored newly-created Acadia National Park.

Today’s visitors can catch a glimpse of this gilded age by strolling along the Shore Path, past manicured gardens and elegant homes draped in ivy.

More discoveries await in Halifax, Nova Scotia as we step off the ship and into history. The Halifax Seaport stretches from Piers 19 to 23 and is an exciting cultural district filled with boutiques, cafés, waterfront restaurants, art galleries and more.

The seaport is also home to the Canadian Museum of Immigration at Pier 21, a receiving station for almost one million immigrants to Canada. Although my own ancestors arrived from Ukraine via the Port of Quebec City, it’s still fascinating to browse exhibits such as advertising campaigns promoting homesteading in Canada between 1896 and 1914. Holland America Line has partnered with Food & Wine Magazine to offer immersive culinary EXC Tours and this Seafood Chef Experience is led by the engaging team of Chefs Nikki and Adam Todd.

We learn how to select, clean and serve fresh mussels, get a master class on making East Coast chowder and discover the secret of dill sour cream scones (it’s pickle juice).

A tutored tasting helps us understand how “merrior” (acidity, nutrients and water temperature) contributes to creating the briny, buttery, sweet flavour PEI oysters are famous for.

Onboard the Nieuw Statendam

Our heightened appreciation for seafood serves us well back onboard the Nieuw Statendam. It’s a Pinnacle-Class ship (signifying extra amenities) and Holland America’s Culinary Council of seven world-class celebrity chefs craft the menus at the included restaurants as well as specialty venues (extra cost). Foodies will want to sign up for the Seafood Chef Experience in PEI
Photo: Michele Peterson

Not only do they bring the latest trends, global influences and expertise to the cruise experience but they draw on seasonal and regional ingredients including seafood, premium sustainable beef and farm-fresh produce.

Dishes span the approachable such as grilled salmon in the main Dining Room to the adventurous such as lobster tempura sushi by sushi master Chef Andy Matsuda. 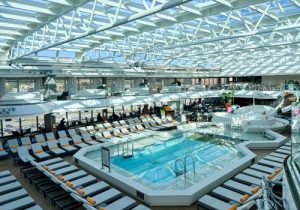 For seafood lovers, Rudi’s Sel de Mer is one of the most coveted reservations at sea. A highlight at this French brasserie is the seafood tower, a monumental creation featuring jumbo shrimp, crab legs, lobster claws, mussels and oysters.

Post-dinner, there’s time to unwind over a cocktail and entertainment at the Rolling Stone Rock Room, B.B. King’s Blues Club, Billboard Onboard, Lincoln Center Stage and the stunning World Stage with its 2-story LED screen.

The pleasures of cruise life wrap up each day. The sparkling pool deck with hot tubs is  favourite diversion. Our welcoming veranda category cabin on the Mozart deck features a private veranda and is filled with light from floor-to-ceiling windows.

It includes a desk and chair, a sitting area with coffee table, a queen-size bed, ample closet space, a mini-bar and cabinet/serving area plus spacious bathroom.

As we sail along the St. Lawrence River to the final port of Quebec City, I realize our ship is tracing my ancestors’ journey along the mighty waterway. While the skyline has no doubt changed since their arrival in the late 1800s, the ramparts of the walled city and majestic Fairmont Le Château Frontenac positioned on towering Cape Diamond in Old Quebec would have been standing. Opened in 1893, its French architecture of towers, turrets, dormers and high-pitched roofs is as impressive today as it would have been then.

Exploring the charms of Old Quebec, a UNESCO World Heritage Site, is a highlight on any Canada-New England cruise but it’s especially memorable when the city is draped in autumnal hues.

On our final evening, an open door and welcoming crowd draw us into a bar de chansonniers, a restaurant with live traditional music, on rue Saint-Jean.

The toe-tapping melodies of Quebecois fiddle and plates of steaming food are proof that although we’ve travelled more than 1500 nautical miles from embarkation in Boston to our cruise’s end in Quebec City, local flavour and hospitality are never far away.

Michele Peterson is an award-winning travel writer who specializes in food, drink and sun destinations. Her work has appeared in major magazines, guidebooks and travel anthologies. Get recipes, travel tips and inspiration on her A Taste for Travel blog or via Twitter/Instagram @atastefortravel