I first met Marina when she was the President and CEO of The Foundation of Greater Montreal, and we worked together on a story about the Foundation and the then Chairman, Dick Pound. I’ve followed her career since then, and I admire the positive contribution that Marina has made to Montreal, and her current work with Chez Doris.

Her professional resume is impressive. She successfully led a variety of not-for-profit community organizations in Montreal and New York City, where she and her husband Grant lived for a time.

Marina started her career at the Executive Director of Tel-Aide Quebec, and then worked with Father Emmett Johns at Dans la Rue. When she and husband Grant moved to New York, Marina held executive positions at some high-profile organizations, including United Way of New York City and President and CEO of the National “I Have A Dream Foundation”.

I asked Marina for some biographical information to help me with this story, and before our in-person interview, she sent me what you are about to read. Marina approaches every task with energy. Unintentionally, and with her usual thorough preparation, she had written the cover story with a biographical authenticity that I could not replicate. With her permission, here is Marina’s story… in her own words.

We are fortunate to have Marina Boulos-Winton in Montreal and making a difference in the lives of vulnerable women on a grand scale.

And now – over to Marina.

“My parents immigrated to Montreal from Egypt in 1953 with only $35 in their pockets and had strong values and work ethic. My father was of Lebanese and Russian descent while my mother was of Italian descent.  My dad studied civil engineering in Egypt.  While he always worked for engineering firms, his was not part of the Order of Engineers as his studies were not recognized.  My dad had a strong work ethic, and early in his career, worked more than one job and subsequently took on jobs where he would be posted abroad. My mother was a homemaker and had really strong convictions.

After I was born, we moved from Cote Saint Luc to N.D.G., on Connaught, towards Montreal West.  Along with my brother Serge, who is 10 years older than me, we experienced a happy, modest, and disciplined upbringing. We spoke three languages at home – French, English, and Italian.  I went to Italian school on Saturday mornings.  Our summers were spent in Italy travelling in a Volkswagen camper. By 1983, my brother met his future wife while on vacation in Italy and found work there and moved there permanently.  He recently retired from his job with Piaggio, an Italian motor vehicle company. 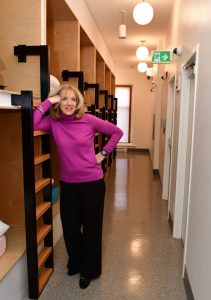 After I graduated from the Convent of the Sacred Heart (now known as Sacred Heart), I went on to Vanier College, and then McGill University to study Psychology.  I hoped to eventually become a psychologist.  I completed an internship at the Montreal Women’s Centre, which changed my career path. I recall one day answering the phone with a conflicted woman on the other line. The woman was asking for my advice as she was advised by the hospital to press charges against her live-in boyfriend as she was a victim of domestic abuse which resulted in internal injuries. She did not want to.  I was 21 at the time, walking her through her dilemma, though the answer to me was obvious. It was a moment forever etched in my mind. As a psychologist I figured I would either get too emotionally involved or want people to get well sooner than they were capable of.  I then enrolled in a Graduate Diploma in Applied Management at McGill University at night and worked by day at first, for a women’s centre and then a drug rehabilitation centre.

At the tender young age of 24, I became an Executive Director of a local non-profit. As the head of Tel-Aide Quebec, Greater Montreal’s crisis line where the phone lines were manned by a pool of 300 trained volunteers at the time, I found my professional footing. Armed equally with more confidence, experience and not just compassion, I then went on to become the Executive Director of Dans la Rue, working closely with its founder, Father Emmett Johns. Father Johns was one of a kind, and he embodied what many of us want priests to be.  He was a shepherd to his flock, and he was surrounded by people who, me included, wanted to serve in his ministry.  His way of assessing community needs, turning ideas into reality, and solving problems guide me to this day.  That said, along with the influence of my parents, Sacred Heart had a real imprint on me as did my management degree at McGill, which taught all its classes with the “Case Study Method,” which analyzes real life problems and students come up with solutions to solve challenges.

By 1997 I moved to New York City to be with my husband, Grant. Four years prior, we both accepted jobs on the spot without talking to one another.  He, with Banque Paribas in New York and me, with Dans la Rue.  Grant and I dated a long time, ten years with a 2-year break in between.  We met at a frat party while we were students at McGill University. Father Johns had married us while Grant worked in New York 2 years prior to our marriage, and we continued to hold a long-distance relationship for an additional 2 years after the wedding. After joining Grant in New York, I held executive positions with the United Way of New York City, CCS Fundraising, and was an Assistant National Executive Director of The YWCA of the USA, President & CEO of the National “I Have a Dream Foundation®” and Interim Executive Director of the Highwater Women Foundation.

During our time in New York, we had two children.  While attending an alma mater event in New York City for McGill University, I told the director of alumni affairs that I’d move back to Montréal in a heartbeat. She then began to tell me about a job in Montreal, which I might be perfect for. I interviewed and much to my surprise, I got the job!  And so, in 2009, we all moved to Montreal so that I may take a new job as President & CEO of The Foundation of Greater Montreal. After that period, I consulted for two years and one of my clients was Chez Doris!

Chez Doris was not without its own struggles, as many non-profits can attest. Prior to my arrival in 2014, the organization successively lost three previous executive directors in five years. Chez Doris faced a growing deficit (ending its fiscal year on March 31, 2014, with revenues of $843,989, expenses of $947,495, and a deficit of $103,506), and as a result the Board had decided to temporarily close the shelter’s weekend operations. Throughout that fateful year of 2014, the deficit continued to grow and was abysmally close to risking reaching the threshold of its line of credit of $200,000. Staff was reduced to 11 employees, and, fearful that Chez Doris was a sinking ship, many Board members resigned.  In fact, three were left.

My work was cut out for me. Correspondence and grant reports were going unanswered. My immediate tasks were obvious (other than reading emails!): to raise sufficient funding to reinstate the weekend services, repair a decaying and dilapidated building, and implement new programs while improving existing ones. The volunteer program and the board were reinforced with new recruits, happy and eager to share their experience and vast knowledge.  To this day, Chez Doris continues to benefit from such expertise on behalf of those serving as volunteers and/or board members in matters dealing with anything from best human resource practices to general building repair and construction, to marketing and communications.

While all these improvements had been made at Chez Doris, we began noticing as of 2017, an increase in the number of homeless women who literally had nowhere to turn when we used to close at 3 PM. Consequently, Chez Doris’ Board of Directors decided that opening a shelter to meet growing needs of homeless women would be necessary. In 2018, Chez Doris had the good fortune of receiving an unexpected gift of $1 million from Andrew Harper, who has since passed.  Soon afterwards, the City of Montreal, the provincial government, and the federal government followed with three grants of a million or more for a combined total of $5 million, mostly for the construction. And to add to our recent bout of good news, a residential building would also be built by the Société d’Habitation et de Développement de Montreal for Chez Doris’ use to provide 26 studio apartments for homeless women.

Meanwhile, we had no money to operate neither of the eventual buildings, and our next good fortune was to be introduced to Elizabeth Wirth, Chairwoman of M.F. Wirth Rail. In a whirlwind, she quickly assembled a campaign cabinet with Co-Chair François Carrier, Managing Director & Head of Investment Banking, Desjardins Capital Markets to launch a campaign of $10 million in the private sector in the middle of a pandemic.  The funds raised would be used over 5 years to operate both the overnight shelter and residence.

In the meantime, during the campaign, Chez Doris had to adapt to the realities of COVID. We extended our operating hours to become a 24/7 service, two years early.  Our overnight services were from a hotel for 15 months which were then transferred to our day shelter for 4 1/2 months after tourists came back to the city.  We’ve also had to rent office space for our caseworkers to make room for the increasing number of homeless women coming to our day shelter. Housing search and support services were vastly expanded, as over 1,600 women experiencing homelessness have been aided by our organization since the beginning of the pandemic. But the situation remains most critical for homeless women, who have increased from approximately 20% of the women served by Chez Doris, to nearly 80% of their current clientele.  There has been a paradigm shift and, unfortunately, those who are difficult to house are not autonomous and suffer from mental illnesses, or do not have sufficient income to afford the cost of housing.

On September 19, we launched an emergency overnight shelter for homeless women with 24 beds.  The permanent residence with 26 studio apartments for vulnerable women will be launched in the spring as well as a second residence with 20 rooms and common space, a building we acquired thanks to a federal grant to convert commercial buildings into social housing as well as a generous donor.

Today, Chez Doris has over 65 employees and 125 volunteers. Its operating budget has more than tripled since the pandemic due to the exacerbation of the number of women experiencing homelessness and because we are a 24/7 service.  We remain very much an organization responding to the needs of the most vulnerable women in Montreal.

Right now, I’m tired and sleeping like a baby, BUT what keeps us up at night is the labour shortage, the lack of community space, the number of women suffering from psychiatric problems who are more difficult to help, and the increasing cost of housing making more people susceptible to homelessness.

We also need to be sure that Chez Doris is sustainable. One of my next projects is to achieve raising an endowment of $ 4 million for Chez Doris. The Jewish Community Foundation will match dollar for dollar every donation put in our endowment for a maximum of $ 2 million. With that said, Chez Doris would not be a beacon of hope to our most vulnerable women without its donors, volunteers, and staff. I feel immense gratitude towards each and every person who supports our work. Thank you. We honestly could not do this without you.’’