Vermont’s country inns have long been a lure for those seeking a blend of comfort, peace and historical ambience. While dozens of inns in the Green Mountain State can provide that experience, a true icon of the genre is Dorset Inn, the centerpiece of a quiet hamlet a short drive from bustling Manchester.

Visitors have been welcomed to the building for more than 200 years, making Dorset Inn Vermont’s oldest continually operating inn. The building’s longevity has not been lost on its owners over the years, as much of the original layout and decor features, such as door and window trims and even some wallpaper, have been preserved. This creates an atmosphere quite unlike what one might expect when first entering the lobby. The original wide-pine-board floors and absence of luxurious furnishings might seem initially to be surprising for a top-rated inn – but one quickly feels at home and grasps the history of the place. 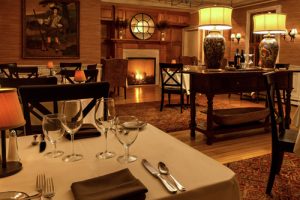 A subsequent tour of the Inn’s main floor quickly brings an appreciation of how of historic authenticity combines with creature comforts, notably the warmth of the living room and the adjoining pub’s laid-back ambience. The place literally opens its arms to you, inviting you to settle into a comfy chair and relax. The tavern and dining room are decorated in a manner that combines colonial accents with a more current look (due largely to new wallcoverings and chairs). The Inn’s warm welcome extends to well-behaved pets, with a variety of recommended dog walks, and complimentary clean-up bags.

The Inn, first opened in 1796, is one of the village’s landmarks. Originally the Washington Hotel, the building has tall columns modelled after George Washington’s Mt. Vernon home. The property has had around 30 proprietors during its two centuries and, along the way, in 1904, its name was changed to Dorset Inn. The Inn now has 25 guestrooms and suites, some of which have gas fireplaces, walk-in showers and jetted tubs. 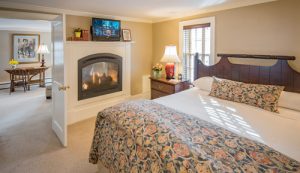 Dorset Inn has 25 guestrooms and suites, some of which have gas fireplaces, walk-in showers and jetted tubs

The village has a number of buildings of the same vintage, mostly gathered around or near the village green, including a general store (the Dorset Union Store), the Dorset Historical Society Museum and several private homes. Dorset was founded in 1761 and soon had several small taverns, which included basic accommodation upstairs to travellers who stopped at what was then an important crossroads for roads traversing the Taconic Range from nearby New York State on their way into Vermont, which originally was part of the colonial Province of New Hampshire.

Dorset was a key area of operations for the Green Mountain Boys, a mutinous group who were formed in the early 1770s to protect the land rights of area settlers who owned land under the New Hampshire Grants. Their titles came under threat by New Yorkers amid a quasi-civil war that existed for 20 years until Vermont became the United States’14th state in 1791. The Green Mountain Boys also fought the British during the Revolutionary War. 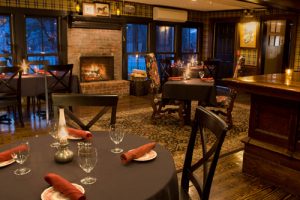 The village’s history is tied to the marble quarries that produced material for important U.S. landmarks as the Supreme Court in Washington and the New York Public Library – not to mention terraces and façade elements of the Montreal Museum of Fine Arts. Dorset itself has sections of marble sidewalks. When the area’s marble industry waned in the 1930s, along with lumber mills and iron foundries, the population declined by about one-half to little more than 1000, before recovering as a Nordic-ski and vacation destination beginning in the 1950s.

Another aspect of Dorset’s Inn heritage is its tradition of multiple generations of returning guests from along the U.S. east coast and from Canada. They view it as a second home, relaxing in its colonial-era comfort.

Fine food is an important part of the experience, the main event being dinner. Highlights of the generous à-la-carte menu are roasted duck breast, grilled pork ribeye and crispy fried falafel. The selection is significantly extended by daily specials, which often includes a signature dish, lemon-herb-panko baked cod. Among the tavern favourites are sauteed calves’ liver and a black-bean burger.

A full country breakfast, which is served in the sunroom or outdoors in front of the inn and is included in the room rate. A must-order on the extensive breakfast menu is the corned-beef hash. 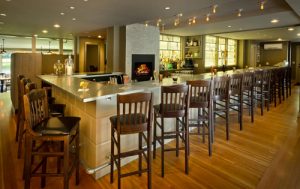 An alternative is to dine at the nearby Barrows House, which offers a more contemporary atmosphere and what the proprietor describes as a “farm-chic” menu. There is a long bar with lively atmosphere, and a large terrace where meals are served in the warmer seasons. Barrows also has 27 guest rooms. It is part of the Church Street Hospitality group, which within the village also includes the Dorset Bakery, and serving breakfast and lunch, as well barista coffees and takeaway baked goods.

The Group’s properties farther afield make for hearty meal stops on scenic drives from Dorset and include the Lakehouse Pub and Grill, 40 minutes north of Dorset on Lake Bomoseen; Pearl’s Place, in Manchester’s outlet shopping area; the Mountaintop Inn, in Chittenden, an hour north; The Publyk House, 40 minutes south in Bennington; the Old Gray Barn, an intimate event centre near Dorset; and the recently added curATE, a restaurant at the Southern Vermont Arts Centre in Manchester. 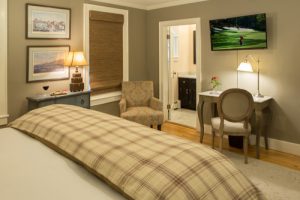 Dorset is an excellent base for day hikers. Popular nearby trail networks are the Owl’s Head Town Forest, Mt. Aeolus Quarry Hikes and the Merck Forest and Farmland Centre. Less energetic visitors can drive 3200 vertical feet up the Mt. Equinox Skyline Drive, accessed southeast of Manchester.

Cross-country-ski and snowshoe trails are in abundance, with easy trails easily accessed for free on the golf course of adjacent Dorset Field Club (a private club, the United States’ oldest continuously operating golf club, founded in 1886). A number of cross-country/snowshoeing centers are a short drive away. Excellent downhill skiing is about a half hour away at Stratton Mountain and Bromley Mountain.

Other popular activities such as mountain biking, falconry and of course outlet shopping are centered in Manchester. Of particular interest to outdoors enthusiasts is the Orvis complex in Manchester, which includes the Orvis store and outlet, Orvis Fly Fishing School and the American Museum of Fly Fishing.

The most direct but somewhat complex route to Dorset is down the west side of Lake Champlain through New York State. Take Autoroute 15 to the U.S. border at Champlain, NY, follow Interstate 87 past Plattsburg and to exit 31 (Westport). Follow routes NY-9N/22 to Whitehall, continue south and east to Granville on NY22, where you cross into Vermont; then VT-149 and VT-30 to Dorset. Driving time and distance is 300 kilometres and 3½ hours; use of GPS or Google Maps is recommended.

An alternative is the Vermont route, down the east side of Lake Champlain via Autoroutes 10, 35 and Highway 133 to the Vermont border, where you pick up Interstate 89 to Burlington, then I-189 over to US-7. From there take US-7 south through Shelburne, Middlebury and Rutland, then continue south on US-7, exit to VT-7A to Manchester Center. In the center of town, take VT-30 north for 10 minutes to Dorset. Four hours and 320 km. (GPS/Google Maps will show several slightly shorter route options down the Vermont side, including VT-22A from Vergennes.)