“You’re a humanist, liberal Jew. So you have to do your very best. In an ideal world I’d have you
eliminated. In this world I need you more than anyone.”— Mike

Playwright David Gow’s most-produced play Cherry Docs, an unblinking examination of hatred, is sadly as current as ever. Ringing even truer, the play has been adapted for the first time to the city it is being performed in. Placing the action in Montreal was important to director Davyn Ryall, “Originally set in Toronto, it now highlights that we are faced with this epidemic of venomous racism right here on our front porches.” Acts to Grind Theatre is proud to present this important show playing at MainLine Theatre from September 28-October 9.

In Cherry Docs, a Jewish legal aid lawyer is assigned to defend a neo-Nazi skinhead accused of the heinous, racially motivated murder of a South Asian immigrant. An intense and fiery relationship develops between the two men as they explore their emotional and intellectual differences. The work probes the explosive effect that blind hate has on society and the hurdles needed to confront it in order to eradicate it. 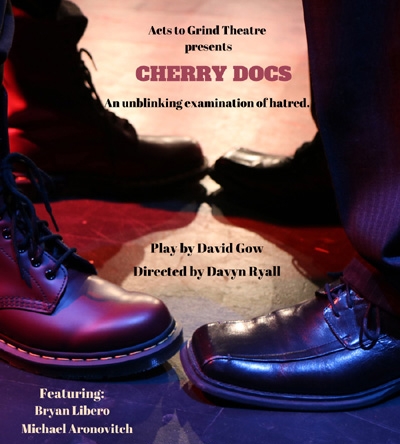 The timeliness of this critically-acclaimed drama is further emphasised with a marked 67% increase in hate crimes targeting religion and ethnicity since the beginning of the pandemic, according to August’s Statistics Canada report. Yet, we are generally depicted as being a progressive, diverse and multicultural society… Here, audiences are forced to examine, recognize and address their own personal prejudices.

Davyn Ryall, Acts to Grind Theatre’s artistic director and Cherry Doc’s director, was inspired by the play’s eloquent writing and its power to connect, “The compelling, haunting story encourages people to question their beliefs regarding tolerance and acceptance of others—where does this hatred come from?” said Ryall. “What resonates most for me is where the playwright starts us off in the beginning and where we end up; how hatred turns to questioning.”

Playwright David Gow has referred to his enduring work as his “own private Zoo Story” as it is a two-hander that has long legs, “Cherry Docs premiered in 1998 and has had more than 100 productions around the globe, has been translated into 13 languages, and was made into the film Steel Toes,” said Gow. “Consistently described as topical and ‘ripped from the headlines’, the headlines have gotten bigger and moved from page 22 to page 15 to page 1. The question is: what will we do about the situation?”

Bryan Libero, a founding member and associate artistic director of Acts to Grind Theatre, plays the role of the accused, Mike. He was drawn to the complex characters and engaging premise, “I hope audiences address the various emotions evoked, and feel empathy towards a character they didn’t expect to empathize with,” he said.

Michael Aronovitch portrays the lawyer, Danny. What speaks most to him is the exploration of ignorance, “It is gripping how someone would need to so badly to be part of something, that his actions now lead him to be alone with serious consequences,” he said. Aronovitch can relate to the plays’ themes, “Being Jewish, I have experienced, witnessed and helped in the fight against antisemitism and racism in general.”

MainLine Theatre is the ideal intimate performance space for the production’s setting of a jail cell and prison interrogation room. Design elements add to the atmosphere of tension that mounts during the production. The contrast of music from heavy rock to traditional klezmer underscores the two worlds of the characters.

“If I started hitting you I might not be able to stop.” – Danny Dunkleman
“Now you know how it feels. That’s my starting place.” – Mike Downey

To purchase your tickets visit: www.mainlinetheatre.ca