Montreal’s flagship cultural event of the fall season will once again showcase the year’s prizewinning photographs, as selected by a jury that sifted through nearly 65,000 submissions by 4,066 photojournalists hailing from 130 countries.

Often dubbed the Oscars of photojournalism, the World Press Photo is the most prestigious international press photography contest. Presented since 2005, the Montreal edition is one of the most popular on the planet.

In line with the World Press Photo’s new approach, an independent jury of regional and global experts selected the regional entries for 2022. Divided into four categories (Singles, Stories, Long-Term Projects, and Open Format), the prizewinning photographs were announced in Amsterdam on April 7. 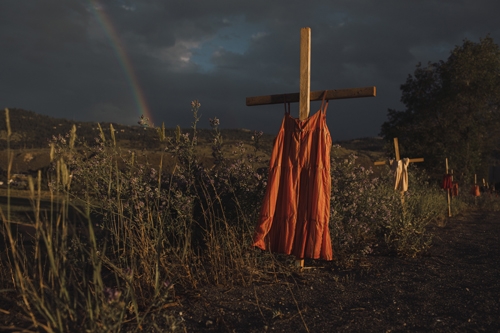 This year, the jury of the most prestigious international press photography contest awarded its top prize to Canadian photographer Amber Bracken for Kamloops Residential School, a photograph taken for The New York Times.

Photographed in British Columbia, the red dresses hung on wooden crosses commemorate the children who died at the Kamloops Indian Residential School. Amber Bracken photographs primarily across western North America, specializing in relationship based and historically contextualized storytelling. Her work explores the intersections of environment, culture, and colonization. The Albertan photographer has covered global issues for media outlets such as National Geographic, The Globe and Mail, The Wall Street Journal, BuzzFeed, Maclean’s, ESPN, and The New York Times.

What’s more, photographer Justine Latour will present her exhibition Claire 107 years old for the very first time alongside the prizewinning photographs of this event. Claire Sigouin was born in Montreal in 1915. In the decades that have followed, she has carved her own path while disregarding each era’s prevailing rules and expectations. Having entered her thirties at the end of World War II, and turned 107 in May 2022, she retains the same youthful spirit and sharp mind as ever—and intends to live for a long time still. Claire’s laughing eyes tell the vibrant story of an extraordinary and atypical life. When fate brought Justine Latour in touch with Claire, she quickly became her muse. “I fell in love with Claire at first sight. Since then, we’ve become friends,” explains the photographer, who has been capturing the centenarian for many years.

Artist Caroline Monnet will serve as spokesperson for this 15th edition, where she will also present the world premiere of her exhibition Ikwewak (Women).

About World Press Photo
Founded in 1955, the World Press Photo Foundation is an independent, non-profit organization with its headquarters in Amsterdam. The foundation is committed to supporting and advancing high standards of photojournalism and documentary storytelling worldwide. Each year, the exhibition travels to more than 100 cities in 45 countries and is seen by more than 4 million visitors. The World Press Photo receives support from the Dutch Postcode Lottery and PwC.