GARDENS OF LIGHT – 30 years of magic

Espace pour la vie is immensely proud to celebrate the 30 years of passion and creativity of its team, who year after year manage to find new ways to dazzle visitors during the Gardens of Light.

In 1992, the Jardin botanique installed the first lanterns at the Chinese Garden. Who could have known that 30 years later, the event would not only be a Montreal cultural landmark but that it would have grown to its current size, now highlighting the Jardin botanique’s three cultural gardens? 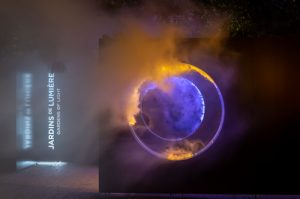 Don’t miss Ode to the Moon, from September 2 to October 31. Come discover or rediscover this magical circuit. A very special finale awaits visitors in the Chinese Garden in honour of the luminous event’s anniversary.

Ode to the Moon

As the universal beacon that has guided human beings since the dawn of time, the Moon accompanies visitors throughout their exploration of the Gardens of Light. As they stroll through the gardens, guided by the night star, visitors are invited to howl and spy wolves. The Wolf Chorus is a dialogue between man and nature. 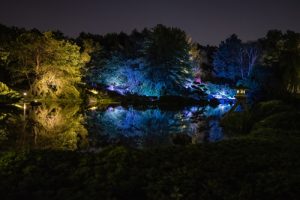 The Japanese Garden is transformed into a vast canvas onto which autumn paints its colours, while the First Nations Garden takes visitors on an immersive and poetic journey into the heart of the seasons of life, accompanied by the spirits of the river, fire, forest and wind. And finally, in a spectacular finale, the Chinese Garden lights up, seeking to outshine its lunar rival. Its hundreds of lanterns whisper the legend of Pangu, the giant who created the world. Expect a fabulous edition of the event featuring stunning lanterns in a multimedia water show on the Lake of Dreams. It’s a new, immersive experience and a Chinese Garden the likes of which you’ve never seen!

At the Japanese Garden
The cycle of the seasons
The Japanese are very sensitive to the present moment and to the many signs of the changing seasons. The impermanence of things makes the seasons all the more precious. The illuminated Japanese Garden is a living work of art where the landscaping and the plants themselves, with their myriad structures, forms and colours, take pride of place. 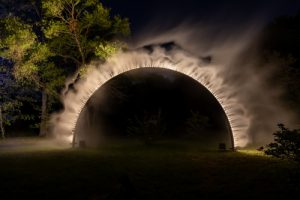 At the First Nations Garden
The rhythm of life
At the heart of the circle where the seasons of life follow one another in an endless stream, the Moon marks time and sets the rhythm of life. In keeping with the fundamental principles shared by Aboriginal peoples and given voice by the words of Innu poet Joséphine Bacon, the illuminated path of the First Nations Garden beckons visitors on an immersive and poetic journey into the heart of the circle of life.

At the Chinese Garden
The legend of Pangu, the giant who created the world
Before the world was created, legend tells that the Universe looked like a large egg in which Heaven and Earth were mixed together and Pangu lay in a deep sleep. After 18,000 years, he emerged, shattering the walls in a thunderclap. It took him another 18,000 years to put the broken pieces back together again. When he died, his body became the fertile soil; his blood, the rivers; his sweat, the rain; his hair, the trees and plants; his eyes, the Sun and the Moon; his breath, the wind; his voice, the thunder; and his lice and fleas … human beings! His limbs formed the four cardinal points reigned over by China’s mythical animals: the Azure Dragon, Vermillion Bird, Black Tortoise and White Tiger.

Timed tickets
To make the most of your experience, you will have to choose a set time for your visit when you purchase your tickets. Your timed ticket will allow you to wander freely through the three cultural gardens inside the Jardin botanique. They also give you access to the Jardin botanique as a whole, which can be visited at any time on the same day.  espacepourlavie.ca/ticketing