South Florida, known for its beautiful sandy beaches, has much to offer visitors beyond the shoreline. Another great draw to the area is its reputation as an epicenter of art. 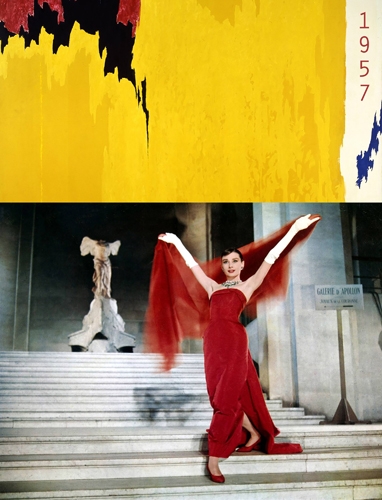 The new exhibition “Art Meets Hollywood” is the museum premiere of Bonnie Lautenberg’s new series of digital collages, 28 diptychs pairing scenes from famous films alongside iconic works of art. Lautenberg’s only rule for her experimental process is that both the film and the artwork originated within the same year.

On view now at Boca Raton Museum of Art, Lautenberg channels the creative zeitgeist between filmmakers and artists during each year that she intuitively chronicles, starting in 1928 up until 2020.

“The connections are often witty but are invariably imaginative” . . . “Lautenberg’s series is beyond clever; it also captures a synergistic zeitgeist — conscious or unconscious — between artists and filmmakers. If we’re lucky, we’ll be gifted with a Lautenberg mash-up for every year motion pictures have existed.” ―John Thomason, Boca Raton Magazine 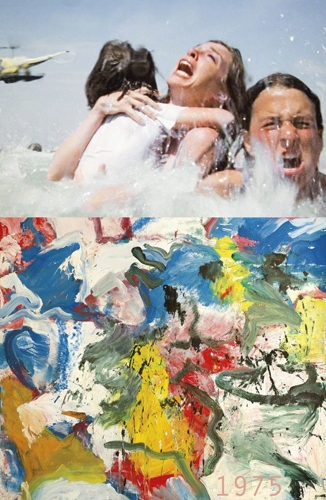 Lautenberg plays matchmaker to the 1957 movie Funny Face by combining Audrey Hepburn’s bold pose with Clifford Still’s painting PH971–both majestic, and both glamorous. When viewed together this way in the museum gallery, the combination seems to make perfect sense, as if they were made for each other.

In another work from this series, the terrifying scene she selects from the 1975 movie Jaws literally screams above a Willem De Kooning painting that conjures what could appear to be blood spilling into the water below . . .

“Lautenberg pulls together visuals she feels speak to each other, taking us along on her colorful trip to explore how these two art forms have amazing parallels and are beautifully paired,” says Irvin Lippman, the Boca Raton Museum of Art’s executive director.

“Through her careful considerations, she brings to life each moment in time, the spark of creativity these pairings might have shared. She possesses a keen eye on the visual elements of humanity and culture that arise.”

“Throughout art history, artists have always been influenced by some force going on in the world around them. I started thinking about how artists who work in different art forms might have influenced each other. I decided to explore how one art form can influence another,” adds Lautenberg.

“Visual codes of emotion that transcend and unite these two disparate visual worlds of film and art, capturing their shared feeling” … “wonderful wit and sense of humor, surprising connections that disrupt the way you think about the paintings and films that speak to each other within the work” … “Through Lautenberg’s juxtapositions, abstraction’s high-keyed color becomes Technicolor; painting’s genres become comedy, drama, musical and thriller.” – Levi Prombaum, Curatorial Assistant, Collections Solomon R. Guggenheim Museum

“The brilliance of these juxtapositions is how she illuminates the psychological connections between each film scene and artwork,” adds Lippman.

Lautenberg is an artist, photographer and writer based in New York and Palm Beach. During the past 30 years, her works have been featured in gallery shows, museums and art fairs throughout the United States. Lautenberg’s work is currently on view at the New York Historical Society’s Center for the Study of American Culture.

“Lautenberg gets top marks for detecting connections we can only see in hindsight” . . . “Ms. Lautenberg has an intuitive process involving images that talk to each other. She plays matchmaker to the symbiotic relationships” . . . “The power of each frame remains in the connection shared by both.” ― Gretel Sarmiento, Palm Beach Florida Weekly 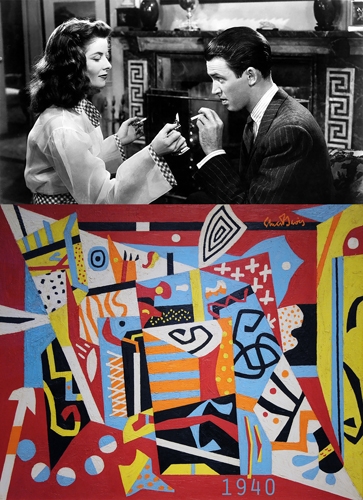 Some of Lautenberg’s pairings in this series featured at the Boca Raton Museum also stem from her own personal history.

In the 1960s her father purchased the Stuart Davis painting Hot Still-Scape for Six Colors ‒ 7th Avenue Style. In this pairing, she juxtaposes the Davis painting that she admired as a child growing up in her family home, with a scene from the 1940 film The Philadelphia Story.

The family eventually sold the painting some 25 years later. Ultimately, the painting was donated to the Boston Museum of Fine Art. Years later, Lautenberg was reunited with the painting when she visited the museum and was heartened to see it was still in the same frame it had during the many years when it hung over their family fireplace.

Lautenberg’s “1952,” her combination of a scene from Singin’ in the Rain with Yayoi Kusama’s painting titled The Sea (both from 1952).

This year marks the 70th anniversary of Singin’ in the Rain, one of Hollywood’s most beloved films of all time. It was directed by Gene Kelly who also starred in this Hollywood classic. In honor of the film’s milestone anniversary, Warner Bros. Studio is releasing a new 4K Ultra HD version of the classic movie.

At the opening reception for Lautenberg’s exhibition at the Boca Raton Museum of Art, one of the special guests of honor that evening was Patricia Ward Kelly (the widow of Gene Kelly). She is the Creative Director of the Gene Kelly Legacy Project in Los Angeles.

Lautenberg and Kelly discuss the visual connections between the film and the painting in this video, recorded at the Museum on the night of the exhibition opening. 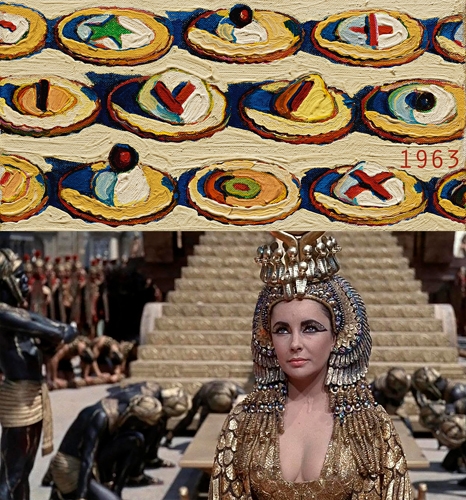 In keeping with Bonnie Lautenberg’s keen ability to tune into the zeitgeist, this newly released high-resolution anniversary edition of the film is currently making headlines around the world with screenings across multiple cities and at major festivals, including the Cannes Film Festival.

“This series by Lautenberg is extremely original, and I love the idea of what she is doing with the two art forms,” said Jean Albano, whose gallery in Chicago has showcased Lautenberg’s different series of works, mostly photography, for the past eight years.

“They’re visually striking, but you can also engage with them intellectually. Beautifully put together artistically, very clever and appealing to look at,” added Albano.

This new exhibition in South Florida, Art Meets Hollywood, opened at the Boca Raton Museum of Art concurrently with another celebration of films and artmaking, Art of the Hollywood Backdrop: Cinema’s Creative Legacy. Both shows together at the Museum are a dream come true for cinephiles.

For more information on this exhibit visit: www.bocamuseum.org

Bonnie Lautenberg is an artist, photographer and writer. Her work was recently shown at the Jean Albano Gallery in Chicago, and at David Benrimon Fine Art in New York, in the show Rethinking America alongside works by Warhol, Lichtenstein, Longo, Kass, and Ed Ruscha. To view her artworks and photography, visit BonnieLautenberg.com featuring images she has taken in Israel, Antarctica, Cuba, and around the world for the past 25 years.