Mike Griffiths has struggled with his health for his entire life. At the age of 24, he received his first kidney transplant. The surgery was a big step toward better health, but it was not without challenges.

“I went into organ rejection three times, but ultimately, I was able to keep the kidney,” says Mike.

Though the donor kidney changed his life, eventually it began to deteriorate, and Mike was put on dialysis. In November 2021, he received a second donor kidney to replace the one that was no longer functioning. The surgery was successful but, unfortunately, his health struggles were not over. As he healed from his kidney transplant, Mike developed an infection.

Post-transplant infections are always cause for concern, but Mike’s was particularly worrying—the bacteria infecting his kidney were resistant to antibiotics.

“I knew something was wrong—it wasn’t healing properly. I went to see my doctors to check,” says Mike. “I had no idea just how serious it would turn out to be.” 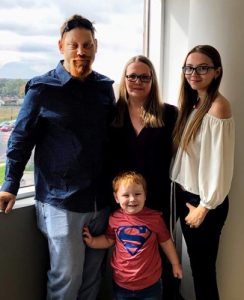 Mike Griffiths (left), who was treated at the MUHC for an antibiotic resistant infection, with wife Jennifer, daughter Rebecca and son Nathan.

Antimicrobial resistance (AMR) is a growing health crisis in which bacteria and other microbes are becoming resistant to antibiotics, disinfectants and other antimicrobial products. The consequences could be devastating: without reliable antibiotics, even the simplest of surgeries could pose risk of major infections. Similarly, hallmarks of modern medicine such as chemotherapy, organ transplantation and joint replacements—all of which require antibiotics—could come with much more risk in the not-so-distant future.

Mike’s infection not only threatened his donor kidney, but his life. The first round of antibiotics he received were not effective, and it took several tries to find a drug that worked.

“I have complete faith in my medical team,” says Mike. “I know everyone here at MUHC, and I am confident that they are taking good care of me.”

Mike’s story is not unique. Millions of people around the world die from AMR infections each year, and the threat is growing. No new classes of antibiotics have been released since the 1990s, and the development pipeline is dry because they are not profitable for pharmaceutical companies. To tackle this growing problem, McGill University and the McGill University Health Centre (MUHC) are creating the McGill Antimicrobial Resistance Centre. The new Centre will bring together experts from a wide range of fields to find new solutions to AMR.

Led by clinician-scientist Dr. Dao Nguyen, the AMR Centre is searching for new approaches to diagnosing, treating and preventing the evolution of resistant microbes. Already, teams of scientists are developing bacteria-killing coatings inspired by the nano-scale spikes found on dragonfly wings; providing education and resources to physicians in Addis Ababa, Ethiopia, where AMR is rampant; and encouraging students to search for new antibiotics in soil through a program called Tiny Earth. This only scratches the surface of the new ideas the AMR Centre is poised to test.

“For decades, we have relied on antibiotics being effective, but with the rise of AMR, they may fail us more and more. It is critical for the future of medicine—and the future of human health—that we find new ways to diagnose, prevent and treat infection,” says Dr. Dao Nguyen, Director of the McGill AMR Centre.

For patients like Mike, the discoveries of the AMR Centre will be life changing. He was only released from the MUHC recently, six months after his transplant. Though the treatment was effective, healing from such a major infection is a slow process.

“The work doctors are doing to help people with resistant infections is so important. If they had not been able to find a drug to treat my infection, I could have died,” says Mike.

Despite a lifetime of health struggles, Mike remains positive. He trusts his medical team to keep him healthy so he can be at home with his wife and two young children.

“Everything takes time. I was a mechanic, and my dad always told me that in mechanics you can have either good, fast or cheap, but you can never have all three. Though my treatment was not fast, I know I received the best care,” says Mike.

It is estimated that by 2050, AMR will jeopardize 10 million lives worldwide and impose an economic burden of $100 trillion USD per year. To combat this bleak future, the MUHC Foundation is raising millions of dollars to fund research that will find solutions to AMR.

Mike hopes that scientists and physicians can learn from his experience to help treat and prevent resistant infections.

“It’s a good feeling to know that my situation could lead to change and ensure others don’t go through the same thing I did,” says Mike.

The AMR Centre is an initiative of the MUHC Foundation’s Dream Big. Solve Humanity’s Deadliest Puzzles campaign, which is raising $60 million to support the McGill Interdisciplinary Initiative in Infection and Immunity (MI4). MI4 brings together over 250 researchers from a wide range of fields who together are finding solutions for infectious and immune-mediated diseases from COVID-19 to tuberculosis to AMR. To learn more and to donate, visit https://muhcfoundation.com/dream-big/infection-immunity/