This summer the Orchestre Symphonique de Montreal will be refreshingly busy with live concerts in city parks, concert halls and three performances at Festival Lanaudière. In all, Maestro Rafael Payare will be leading the orchestra for twenty-four concerts, including a whirlwind four-day tour of South Korea. “I’m really looking forward to spending the summer here in Montreal. We’ll have a mixture of outdoor and indoor concerts, and our musical focus will be The Americas – this is my neighbourhood,” noted the Venezuelan-born conductor who also lived in San Diego and New York. 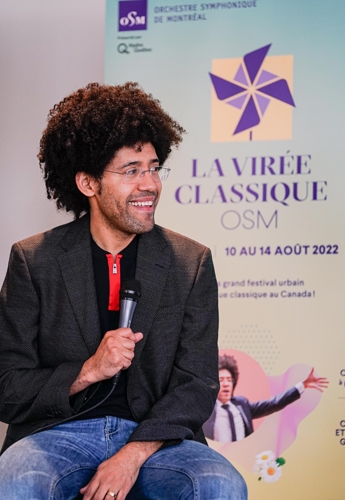 Rafael is energetic and possesses an easy self-assurance that has already captured many Montrealers – and especially the members of the orchestra. “I have been touched by the warm welcome that I’ve received from the musicians and our audiences.”

This will be first summer programming under Rafael Payare, the Orchestra’s new Music Director. This season features the 9th edition of the immensely popular Classical Spree festival, whose theme this year is The Americas.

The Orchestra will also present 16 outdoor chamber music concerts, large-scale Concerts in the Parks, as well as 3 concerts at the Festival de Lanaudière. Summer at the OSM has always been an opportunity to reach out, get closer to local communities and audiences and make music ever more accessible. “I believe that people can be exposed to different kinds of music. They may not like all of it – but that’s ok. On the other hand – they may appreciate some new forms of music .” stated the Maestro during our conversation.

The Classical Spree opens with a concert on the Esplanade at Olympic Park – August 10 at 7:30 pm

The Orchestra kicks off the Classical Spree with its popular free concert on the Esplanade at Olympic Park. Rafael Payare and the OSM will present a repertoire with artists from the Americas. “Several of our guest musicians will be playing in Montreal for the first time.”The evening opens with the “New World” Symphony, moving through an Indigenous song, and West Side Story, and ending with pieces from Prévin and from Venezuelan Castellanos as well as with the Trumpet Concerto by Cuban composer Paquito D’Riveira. Author Natasha Kanapé Fontaine, singer Jeremy Dutcher, soprano Jeanine De Bique, and trumpeter Pacho Flores will join the Orchestra.

Classical Spree will continue with 24 original concerts will be held in four different performance spaces at Place des Arts. The OSM will welcome ensembles as well as numerous local and international celebrated artists from the American continent: saxophonist Branford Marsalis, violinist James Ehnes, and pianists Sergio Tiempo and Montrealer Bruce Liu winner of the 2012 OSM Competition and of the 2021 Chopin International Piano Competition.

The OSM’s summer event will include works by three leading Canadian composers: Jacques Hétu, Jean Coulthard and R. Murray Schafer. The music of Argentinean composer Astor Piazzolla will also be featured in several concerts. Music lovers of all ages can also enjoy a range of free concerts, lectures, workshops, instrument demonstrations and virtual reality experiencesTickets for the Classical Spree’s 24 indoor concerts are now on sale: www.osm.ca or 514-842-9951 or 1-888-842-9951.

Takin’ it to the streets

Sponsored by Sirius XM, the OSM will again set up its tent in the parks of Greater Montreal for classical evenings open to everyone. Under the direction of Dina Gilbert and Adam Johnson, these concerts under the stars are free of charge and part of the OSM’s mission of accessibility. Music lovers will be able to enjoy unifying and inspiring repertoire by coming out on July 26 to Parc Poly-Aréna in Brossard and on August 19 to Parc Angrignon in Montreal (Le Sud-West borough).

In August, OSM musicians go out and meet their public in various neighbourhoods and parks for chamber music concerts right in the city. Sixteen concerts will be presented from August 24 to September 3. Details will soon be available on osm.ca.

Summer at the OSM at a glance 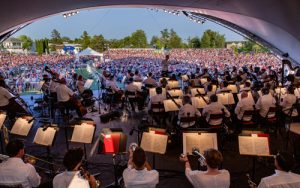 The OSM will be performing in some city parks

August 24 to September 3: Summer in the City with the OSM  All summer long: La Sentinelle — Mont-Tremblant