For the first time in Canada, the New York artist presents his work in a solo exhibition

Following his critically acclaimed solo exhibition at the Museum of Modern Art (MoMA) in New York, Adam Pendleton is bringing a brand-new exhibition, These Things We’ve Done Together, to Montreal. Visitors of the Montreal Museum of Fine Arts (MMFA) can discover Pendleton’s first solo exhibition in Canada, where the New York artist presents new monumental paintings from his series Untitled (WE ARE NOT) as well as works on Mylar created specifically for the exhibition and seven drawings from his defining series Black Dada that were executed this year. The paintings deploy spray-painted language from the artist’s seminal “Black Dada” text (2008), while the drawings index fragments and traces of his painting process.

Adam Pendleton (born in 1984), Still from Just back from Los Angeles: A Portrait of Yvonne Rainer, 2016-2017, single-channel black and white video, 13min 51s. Courtesy of the artist

This exhibition presents hitherto unseen paintings from Pendleton’s series Untitled (WE ARE NOT), monumental works in which letters, drips, sprays and spatters blur the lines between language and abstraction, between question and affirmation and between disciplines of artistic practice, including writing and drawing, painting and photography. These abstract gestures are revisited and reexamined in a series of drawings on Mylar that combine layers of paint with geometric shapes. In a third set of works – the latest iterations of Pendleton’s Black Dada drawings – the artist incorporates images of the traces of paint left on the large sheets of paper hung on his studio walls while he works, creating an index of his painting process. 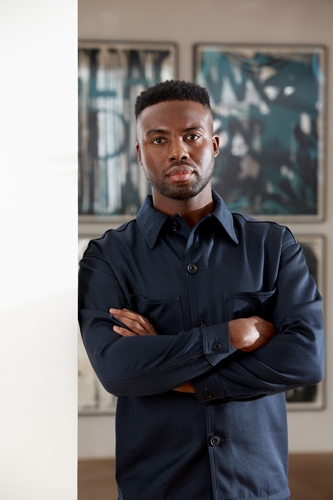 Also on view is one of Pendleton’s acclaimed video works, Just Back from Los Angeles: A Portrait of Yvonne Rainer (2016-2017), a portrayal of pioneering dancer, choreographer and filmmaker Yvonne Rainer. Filmed in a New York City diner, the portrait features the artist and Rainer in conversation, as well as scenes of Rainer performing her iconic dance, Trio A (1966), and reading a text prepared by Pendleton that collages writing by activists Keeanga-Yamahtta Taylor, Malcolm X and Stokely Carmichael, poet Ron Silliman and Rainer’s friend Barbara Dilley.

Adam Pendleton: These Things We’ve Done Together will be on view in the Contemporary Art Square and Graphic Arts Centre of the Jean-Noël Desmarais Pavilion at the MMFA until July 10, 2022. Tickets can be purchased online at www.mmfa.qc.ca.