Composer, singer-songwriter, actor, author, and activist Sting was born in Newcastle, England before moving to London in 1977 to form The Police with Stewart Copeland and Andy Summers. The band released five studio albums, earned six GRAMMY Awards® and two Brits, and was inducted into The Rock and Roll Hall of Fame in 2003.

As one of the world’s most distinctive solo artists, Sting has received an additional 11 GRAMMY Awards®, two Brits, a Golden Globe, an Emmy, four Oscar nominations, a TONY nomination, Billboard Magazine’s Century Award, and MusiCares 2004 Person of the Year. In 2003, he was made a Commander of the Order of the British Empire (CBE) by Queen Elizabeth II for his myriad of contributions to music. Also a member of the Songwriters Hall of Fame, he has received the Kennedy Center Honors, The American Music Award of Merit and The Polar Music Prize. Sting has been awarded Honorary Doctorates of Music by the University of Northumbria (1992), Berklee College of Music (1994), University of Newcastle upon Tyne (2006) and Brown University at its 250th Commencement ceremony (2018). 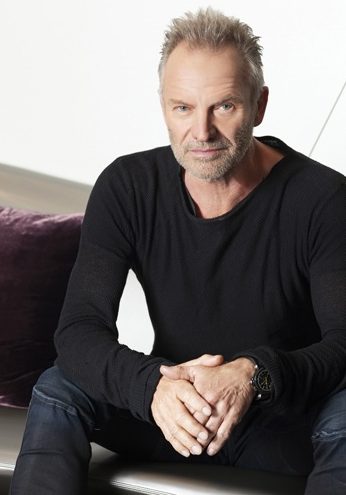 Throughout his illustrious career, Sting has sold 100 million albums from his combined work with The Police and as a solo artist.

Following his critically acclaimed album, 57th & 9th, his first rock/pop collection in over a decade, Sting and reggae icon, Shaggy, released a collaborative, island-influenced album, entitled 44/876, drawing from the many surprising connections at the heart of their music. With its title referencing their home country codes, 44/876 first and foremost honors the duo’s mutual love for Jamaica: Shaggy’s homeland, and the place where Sting penned such classics as The Police’s “Every Breath You Take.” Their chart-topping release debuted at #1 in Germany and Top 10 in the UK. It spent over 20 weeks atop Billboard’s Reggae Album chart in the US, earned Gold certifications in Poland and France and received the GRAMMY Award® for Best Reggae Album.

In 2019, Sting was honoured at the BMI Pop Awards for his enduring hit single “Every Breath You Take,” which has become the Most Performed Song, with 15 million radio plays, from BMI’s catalog of over 14 million musical works. Most recently, the song was added to Spotify’s ‘Billions Club,’ having amassed over 1 billion streams on the platform.

Also in 2019, an album entitled My Songs, featuring contemporary interpretations of his most celebrated hits, was released and followed by a world tour of the same name, which will resume later this year and extend through 2022. Sting’s ‘My Songs’ World Tour is a dynamic and exuberant show featuring his most beloved songs spanning the 17-time GRAMMY Award® winner’s prolific career with The Police and as a solo artist.

Sting’s latest album, The Bridge, showcases his prolific and diverse songwriting prowess. Written and recorded in a year of global pandemic, this new collection finds him ruminating on personal loss, separation, disruption, lockdown, and extraordinary social and political turmoil. Representing various stages and styles from throughout his unrivaled career and drawing inspiration from genres including rock n’ roll, jazz, classical music and folk, the eclectic album features Sting’s quintessential sound on pop-rock tracks such as the album’s opening rock salvo “Rushing Water” and new indie-pop sounding “If It’s Love.”

For tickets and information: www.evenko.ca