Bourgie Hall is pleased to expand its instrument collection through the addition of a magnificent fortepiano! Based on instruments by Conrad Graf and Ignaz Bösendorfer dating from the 19th century, it was built in the United States in 2020 by Rodney Regier. The instrument’s inaugural recital will take place on April 12 at 7:30 pm and features fortepianist Ronald Brautigam, one of today’s most insightful performers, in works by Schumann, Schubert and Mendelssohn. The recital marks Brautigam’s very first appearance in Montreal, and the Dutch musician’s visit is eagerly awaited after more than a decade of absence in Quebec.

Internationally renowned artist Ronald Brautigam is a rare figure among performing musicians of the highest calibre: he plays on both modern and historical instruments. Praised for his musicality, technical bravura, as well as for his masterful interpretations, he has performed in the world’s most prestigious halls and collaborated with renowned ensembles including the Royal Concertgebouw Orchestra, Leipzig Gewandhaus Orchestra, BBC Philharmonic, Orchestra of the Age of Enlightenment, and Tafelmusik. He has firmly established himself over the years as an authority on repertoires of the Classical and early Romantic periods. His extensive discography features several cycles of complete works, including the piano concertos of Mozart and Beethoven and the piano sonatas of Haydn, Mozart, and Beethoven, which have earned him numerous prizes and are now considered as authoritative. 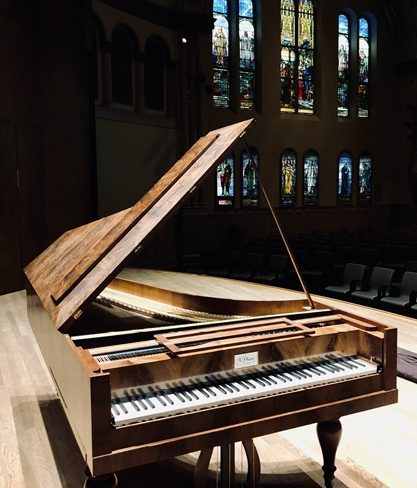 Built specifically for Bourgie Hall, this fortepiano is modelled on instruments from the late 1820s until about 1840 by renowned Viennese builders Conrad Graf and Ignaz Bösendorfer. Admired for their soft, delicate tone as well as their wide range of nuances, they were the type of instrument known to Beethoven and Schubert late in their lives, to Chopin when he visited Vienna, to Robert and Clara Schumann, and to Mendelssohn. Their light frame, made entirely of wood, favours an articulate sound and a sharp attack, while the strings and keyboard mechanism produce a clear, detached sound ideally suited to the repertoire of that period as well as to the playing technique that prevailed at the time.

After over a century of oblivion, since the mid-20th century and the advent of historically informed performance, there is renewed interest in the fortepiano. Once again, the instrument is heard regularly in concert halls around the world—though few halls can boast having their own. The remarkable instrument acquired by Bourgie Hall instantly confers a characteristic, recognizable sound to performances of 18th- and 19th-century works, whether for solo instrument or ensemble.