I was unfamiliar with the term “art hotel” until I had the recent pleasure of staying at Gladstone House in Toronto. Certainly, I was aware of this hotel’s art-focus as its cultural contribution to the city has been legendary since the hotel was first reborn in 2005 thanks to the vision of well-known Toronto architect Eberhard Zeidler and his daughter, Christina; whose body of work includes The Eaton Center and the Queen’s Quay Terminal. In fact, when I first stepped through the doors of The Gladstone Hotel (as it was known back then) it was for Toronto’s Doors Open Festival in 2004, before the hotel had even completed its initial reincarnation as an art hotel from a virtually abandoned property. At the time, that part of town was down on its luck but has since emerged as the vibrant neighbourhood of West Queen West which was voted “2nd coolest neighbourhood in the world” by Vogue magazine. 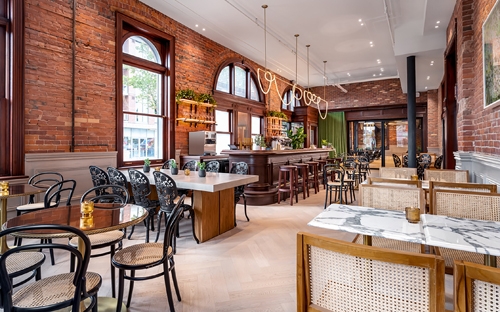 The “Doors Open” Festival is an annual event of open door gallery and art studio visits so it was only natural, I suppose, that an art hotel would also participate and open its doors to the art-loving public. That year I found myself roaming through this vintage hotel (which was still under renovation) until I landed on the roof admiring the view of downtown on the eastern horizon.

Fast forward to 2022 and once again this Queen St. West institution (it is the city’s oldest hotel and one that originally opened in 1889) is now owned by Streetcar Developments and Dream Unlimited Corp. The hotel has again been rejuvenated with a significant interior design upgrade by Elastic Interiors; one that is still true to its contemporary cultural roots.

Gladstone House is one of those hotels that have successfully merged its historic architectural and interior design remnants such as its beautiful red brick exterior, saloon-inspired bar in the main floor bistro and a hand operated “bird cage” elevator. These historic features are married with more modern elements such as colourful film coatings on many of the windows and glass surfaces to create a glorious kaleidoscope of light wherever you look. Now, let me be frank, Gladstone House may not be for everyone as it has its quirks (such as the aforementioned elevator) but if you are a lover of contemporary art and independent boutique hotels, you will most certainly enjoy your stay here. 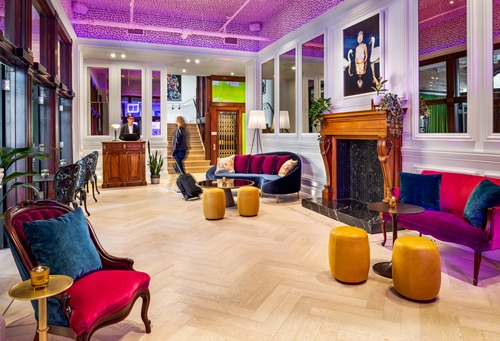 Whenever I visit a new property, I always request a tour which inevitably includes a peek inside a few variations of rooms. However, I can safely say that this is the first time I have been treated to a guided tour by the resident art curator whom, in this case, was a passionate Lee Petrie. Ms. Petrie was the one who put out a call to local artists with the opportunity to adorn the first 41 of the 55 guestrooms with their original artworks. To Petrie’s astonishment, over 500 artists submitted works to a selection jury. From fine art photography to digital collages to sculpture installations, this is a collection of emerging and established artists that is certainly of gallery quality. These pieces are on loan by the artists with the hopes that the exposure will lead to further interest from the guests into their works with purchases to follow. Each work is identified with title, medium, and artist biography.

As Petrie led me through the hotel’s hallways, I noticed an overall improvement in its interior design since I had last stayed here five years ago. Previously these halls were significantly wider and had rather rough-hewn wood flooring. Back then, it almost felt like being in a warehouse that had been converted into a hotel. Now the walls are narrower and painted a pure white with more refined floor surfaces and finished with wainscoting to give a more elegant look. The redesign also allowed the new owners to expand the room count from 37 to its current 55. 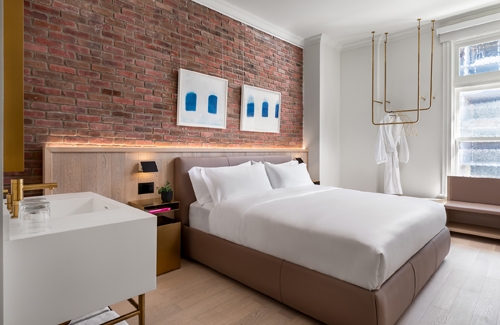 Our first room visit revealed a comfortable king bed set against an exposed brick wall. We were in room 409 which featured the photographic art of Allison Morris, who inserts herself into all of her pieces one way or another.  I had noticed that the bathroom vanity now sat inside the room itself opening more room for the water closet that houses the shower and toilet. This helps maximize the space. The other rooms we visited seemed larger than the first and had more of a minimalist look to them. Once again, the art dominated such as the “Bending over backwards” installation by Morris Wazney which consisted of a fully stocked bookshelf that not only ran up the full height of the wall but also along the ceiling and, seemingly, defying gravity. The plain, white hardcover books had all been fabricated by the artist with fictious book titles like Small Dog Syndrome or Beauty Bender providing guests hours of entertainment. Another room featured a Jen Arron-woven tapestry titled Sawyer Sunset created specifically for this space and installed on the ceiling directly over the bed. Having trouble sleeping? Just let your mind wander into the wavering sunset. 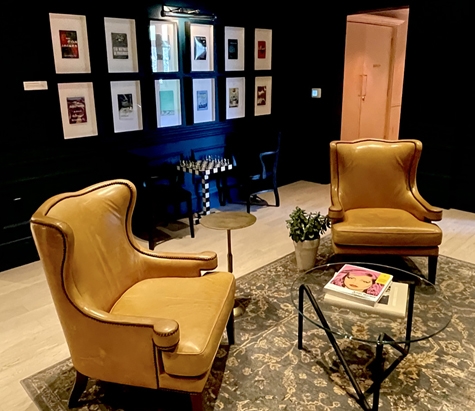 Each of the hotel’s four floors features a public space inviting guests to treat them as their own. On the fourth floor is a lovely library with hundreds of paperbacks for reading either there in one of the comfy leather chairs or taken to your room to be read during your stay. Here the walls feature framed book covers of local authors and poets who have launched their novels or poetry collections at The Gladstone over the years. The third floor has a billiards room featuring a table with neon purple felt. I was half expecting run into the ghost of Prince here shaking me down me for a game or two. Permeating the space are a collection of vintage illustrations and photographs that tell the story of Gladstone House’s 133 year old history including its original construction as a grand railroad inn by the train tracks which brought visitors from across the country into Toronto’s blossoming city limits.

As we continued our descent floor by floor, Petrie led me to the basement which had previously been closed off to guests. Now it features three fitness rooms including a yoga studio and two well-equipped workout gyms (decorated with Korean-influenced street mural art). However, when renovating this subterranean area, the owners decided to also create an art studio which is available to local artists in need of a temporary studio to work on a specific project or collection. Two artists had recently installed themselves there as I had my walk-through and there was room for about four more. 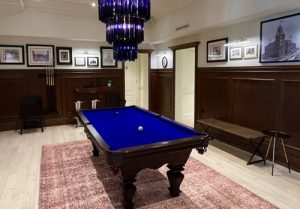 The billiards room – where’s Prince at?

Back on the hotel’s main floor, Petrie asked me to look at the ceiling to take in Bryan Espiritu’s piece; Love & Above which I am told is a “meditative installation containing mantras of calm and peace, words of affirmation from songs played in real time during its creation”. To the uninitiated it appears to be a series of hieroglyphics but evidently there is some sort of pattern here to be unraveled by those with more imagination than I. However, I will say, it is lovely and sets the funky tone of the hotel from check-in to check-out.

Gladstone House is not only a centre for the visual arts but performers of all genres head to their Melody Bar to play live music, dance in the cabaret, loosen up their vocal chords during karaoke nights or howl with laughter during the always entertaining weekend drag brunches. The newly installed disco balls have the regulars very excited.

Whatever your reason to find yourself at the newly improved Gladstone House you are certain to leave with a smile on your face and, perhaps, an emerging art collection on your horizon.

Doors Open returns to Toronto May 28 and 29 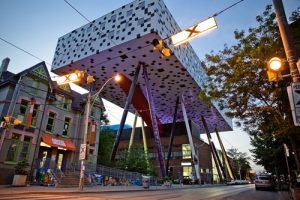 OCAD University is one of the facilities that visitors to Toronto’s Open Door Festival will be able to
access May 28 and 29.

Since its inception in 2000, Doors Open Toronto has attracted more than two million visits to nearly 700 unique locations. It is Canada’s largest Doors Open event and one of the three largest in the world. Visitors get to access many facilities within the city that may normally be off limits or difficult to access such as the Ontario College of Art & Design University (OCAD University) Sharp Center for Design (pictured), The Osgoode Hall Great Library or the historical R.C. Harris Water Treatment Plant. However, many other cultural institutions and galleries also open their doors during this widely popular weekend event. Follow www.toronto.ca/explore-enjoy/festivals-events/doors-open-toronto for updates. Art lovers who visit Toronto might also be interested in the Toronto Biennial Art, which runs until June 5. More details available at: torontobiennial.org