For its second concert of the season, the Orchestre Philharmonique et Chœur des Mélomanes (OPCM) and its young conductor Francis Choinière have called on pianist Alain Lefèvre. Together, they will present André Mathieu’s Concerto No 3 opus 25, also named Concerto de Québec for the film La Forteresse, shot in the National Capital in 1947. This unforgettable show will take place on Saturday, April 2, at the Maison symphonique, in Montreal.

Celebrated for his “dazzling performances” of Mathieu’s works, notably in New York, Paris, London, Berlin and Shanghai, and recognized as a “brilliant piano virtuoso”, Alain Lefèvre has been passionately bringing his music to life since he was 15 years old. He will invite the public to dive into the nostalgic and highly touching melodies composed at the age of 14 by this young genius that was Mathieu.

In view of this concert, he would like to thank Georges Nicholson, author of the biography of André Mathieu, for discovering the original score for two pianos of Concerto No 3 written by the composer himself, as well as the conductor and composer Jacques Marchand, to whom he entrusted the colossal task of restoring the score, rendered with respect and brilliance.

A meeting between two universes 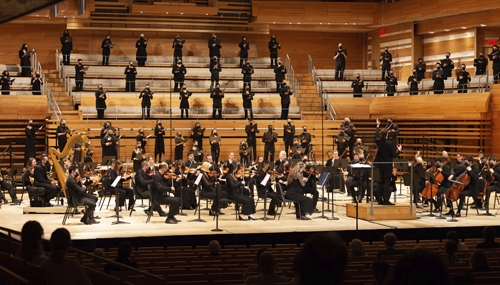 To complete this memorable evening, the 61 musicians of OPCM will deliver the legendary New World symphony, by Antonin Dvorák, under the skillful direction of maestro Francis Choinière, age 25. This hopeful work draws inspiration from American sights and sounds while staying true to the musical traditions of the composer’s native Czech Republic. While the Concerto No 3 evokes with its life-size themes the rural magnificence of Quebec, Dvorák’s creation salutes the melodies of America.

“This concert will celebrate two works that convey a sense of national pride through their rich, comforting melodies that highlight the sounds that form the cultural mosaic of the North American continent,” explains Francis Choinière. “It will combine great artistic talents from Quebec with a flavor of European tradition. We are going to show that music from here is as accessible as European classics“, he explains.

The Orchestre Philharmonique et Chœur des Mélomanes (OPCM) is a non-profit organization founded in 2016 to create a community of talented young musicians. This Montreal ensemble known for its vibrant and dynamic sound is dedicated to the development, promotion and advancement of choral and orchestral music.