For its 23rd edition, MONTRÉAL EN LUMIÈRE  invites you to travel locally and discover winter in a brand new light from February 17 until March 5! The program features a spectacular skating loop overlooking place des Festivals as well as an exclusive show created by Les 7 Doigts that will be performed on the Esplanade Tranquille skating rink. Not only you can enjoy luminous installations and giant film projections on skating and Montreal’s northern heritage, but you’ll rediscover the beauty and energy of Montreal in winter while you’re at it!

An aerial skating loop with music, free of charge
The only one of its kind in the world, the innovative Scotia Bank Skating Loop at the Place des Festivals promises to be one of the highlights of the 2022 edition. This impressive, 300-metre-long raised loop offers you a thrilling new way to see the urban landscape. A multitude of LED tubes will light the path, creating a dynamic and novel visual effect that will turn your skate into an unique experience.

In addition to featuring a musical program when the skating rink opens, the festival also invites you to celebrate your love of music – francophone, country, jazz, rock, electronic and more – from 9 pm to 11 pm during our theme evenings!

Sundays at the skating loop with ICI MUSIQUE
Sunday, February 20 and 27 from noon to 11 pm, lace up your skates and glide around to the music program created specially you by the hosts of ICI MUSIQUE.

As well, every evening at 7 pm and 8 pm, the Scotia Bank Skating Loop will come alive with the festive, five-minute sound and light show Coeur dansant, presented as part of Luminothérapie.

“MONTRÉAL EN LUMIÈRE is an event that celebrates best of our culture, city, warmth and entertainment in a magical winter ambiance. I am thrilled to invite the people of Montréal and visitors from across Québec to celebrate the renewal of our dynamic downtown with an unforgettable experience during one of the world’s biggest winter festivals.” – Yves Lalumière, President and CEO, Tourisme Montréal 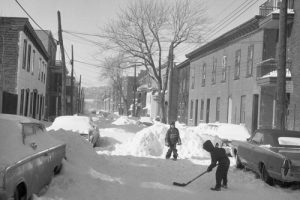 Giant film screenings
Also livening up the Scotia Bank Skating Loop is a film installation entitled Montréal d’hier et d’hiver by multidisciplinary artist Karine Lanoie-Brien, which depicts our love for Montreal and skating with winter scenes from the National Film Board (NFB) archives. The installation, which features two films screened simultaneously on the facade of the Wilder Building and UQAM’s Pavillon Président-Kennedy will create an extraordinary immersive experience that promises to wow spectators.

A window on creativity – Montréal d’hier et d’hiver
From February 17 to March 5, discover how Montréal d’hier et d’hiver was created through a free installation Place des Arts’ exhibition hall. Get a peek at images from 1908 that include renowned inventor Thomas Edison on a visit to Montreal, celebrated hockey player Maurice Richard thronged by fans or powerful scenes of snow storms filmed in the streets of Montreal. 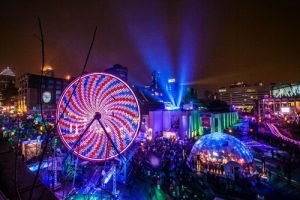 A luminous path
The festival will present two luminous interactive works, Laps and Fabuloscope, on the outdoor site of the Place des Festivals. The latter has been added to the path of installations for the 12th edition of Luminothérapie, which features Entre les rangs, Impulsion, Iceberg and the latest addition Roseaux co-presented by MONTRÉAL EN LUMIÈRE and the Partenariat du Quartier des spectacles.

Of course, young and old can go for a ride on the popular Grande roue Loto-Québec and enjoy dazzling views of the festival site.

Radio-Canada Olympic Zone
The Radio-Canada Olympic Zone invites the public to enjoy a warm and festive setting that puts Canada’s favourite winter sports in the spotlight. Bring the whole family for a game of curling, hockey or shoot the puck contests! Radio-Canada will also be keeping everyone’s hands nice and warm thanks to its giant Mitt Warmer, a totally original, safe and contact-free installation!

Make it a date with family, friends. You can revel in all this fun right up until Saturday, March 5, because the outdoor site as well as the skating rinks will be staying open until then. Free activities will also be offered during spring break.