The management of Salle Bourgie are delighted that their popular-Thursday evening 5 a 7 Jazz concerts can restart, staring on Thursday, February 10 at 6pm. The re-opening concert will feature The Doxas Brothers performing The Circle, their album recorded in 2020. The concert will be available on the web from February 17 to March 3.

Jim and Chet Doxas have been creating and playing music together since their childhood. While still teenagers, Jim and Chet started performing in Montreal clubs and bars in a variety of musical formats; from big bands to rock ‘n’ roll. 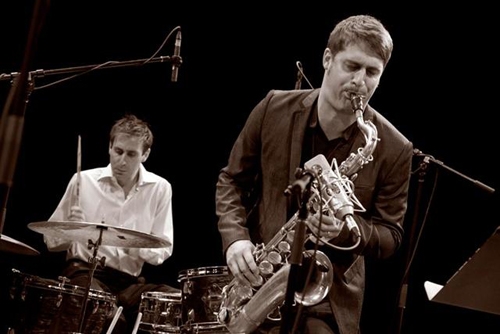 Both have become accomplished jazz musicians and make regular appearances at the Montreal International Jazz Festival as featured artists and as sidemen. For 15 years, Jim recorded and performed around the world as Oliver Jones’ permanent drummer. Jim lives and performs in Montreal; and teaches at McGill and Concordia. Chet lives in Brooklyn, NY, where he is in great demand for recording work. Even though they reside in different cities, the fraternal bond remains strong – even stronger because of their shared love of music.

Accompanied by bassist Adrien Vedady and pianist Marc Copeland, The Doxas Brothers will perform their album The Circle. The recording reflects their musical world, which they have been developing and exploring since their childhood, their years spent in the Montreal jazz scene and their eventual rise to internationally recognized artists. Jim and Chet have become mainstays of the Montreal jazz scene, performing with celebrated artists such as Carla Bley, Dave Douglas, John Abercrombie, Steve Swallow, Joe Lovano and many more.

Jim and Adrian Vedady have been performing on Monday nights for the past ten years at the Upstairs Jazz Bar and have a developed a solid musical foundation of drums and acoustic base; complemented by guest artists on piano, guitar, saxophone and other brass wind instruments.

Tickets for the February 10 live concert are $34, $29 for members, and are available online at the Montreal Museum of Fine Arts website: www.mbam.qc.ca/en/activities/the-circle-1/

Webcast tickets are $15 and available on the Salle Bourgie website: https://www.mbam.qc.ca/en/activities/webcast-concert—the-doxas-brothersthe-circle-1/