OTTAWA – Does Montreal really have the world’s best bagels? I always thought so until I experienced Kettlemans Bagel in Ottawa.

Kettlemans hand-rolled Montreal style bagels, unique spreads, fresh salads, and sandwiches make the perfect breakfast-to-go, boardroom power lunch or late-night indulgence. Founder and Montreal native Craig Buckley opened the first store in August of 1993. When he started the business, he simply wanted to make the best bagels you could find. By rolling, “kettling,” and baking traditional Montreal Bagel in a wood burning-oven using handpicked hardwood and maintaining an unwavering commitment to the traditional quality of the food, Kettlemans has become a food institution; 24 hours a day, seven days a week, and 365 days a year for 28 years.

“Kettling” is a vintage bagel-baker’s-union term that refers to boiling the bagels, as opposed to steam-proofing them.

There are now four Kettlemans locations in Ottawa and one in the Toronto suburb of Etobicoke. And guess what? They are finally expanding to Montreal in 2022 at Av. des Canadiens-de-Montréal, across the street from the Bell Centre. The Toronto area will get at least three more stores in the next year as well.

“Going into French Canada and ultimately bringing the brand back to Montreal as our founder is from there is very important for us as well because that is the capital of Montreal-style bagels obviously,” said Daniel Reyes Cocka, Director of Marketing and Communications for the company and a native of West Island Pierrefonds. “After that, the plan is to expand into the United States therefore offering us the opportunity to grow in the American market and hopefully get an IPO.”

As for the name, “Kettling” is a vintage bagel-baker’s-union term that refers to boiling the bagels, as opposed to steam-proofing them. Reyes Cocka adds that this is a reference to what they used to call people who made Montreal bagels using a kettle, which was boiled in honey water. 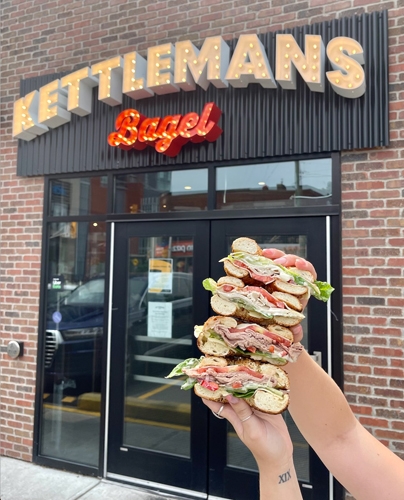 There are some terrific bagel sandwich options

When patrons walk into a store, the first thing they see is the Kettlemans Bagel Roller working and rolling fresh bagels, cutting the dough with a knife, and boiling the bagels in honey water to seal moisture.

Behind the Bagel Roller is the baker who finishes the bagels with fresh poppy or sesame seeds and bakes them for about 20 minutes in a wood-burning oven. Once the process is complete, and it is an active process of carefully turning over the bagels away from the open hot wood flames, the bagels are ready to be eaten.

While you can eat inside, we were happy to dine in our car conveniently parked right near the entrance.

I just loved the concept.  As you get in line to make your order, there are pre-packaged snacks, bagels, party sandwiches, spreads, latkes, knishes and desserts to choose from. Montreal-based Solly the Caterer even has some goods on the shelf.

The selection of your favorite bagel, fresh out of the oven and stuffed with classic deli sandwich ingredients, is a lot of fun. There was so much to choose from. For me it was no contest. I chose the Montreal smoked meat with cheese, while the two others went for bagel and cream cheese with lox, toasted – the first on an onion bagel and the other one all dressed.  It was thumbs up from all three of us. Instead of a number system, each customer is given a pager and alerted when their sandwiches are ready.

Kettlemans also has salads, all dressed pizza bagels and yummy-looking bagel dogs (rolled bagel dough stuffed with a Hebrew national hot dog) and more. I will have to try the latter, as well as their famous pretzel, next time.

I downloaded the handy Kettlmans app. Not only did I get an immediate $5 off, you can load your wallet with dollars and the cashier merely needs to scan your device for payment. The app allows you to accumulate award points. For all the information you will need log on to  www.kettlemansbagels.ca.