Fighting for a Hand to Hold: Confronting Medical Colonialism against Indigenous Children in Canada, was awarded both the Mavis Gallant Prize for Non-Fiction, and the Concordia University First Book Prize.

Shaheen-Hussain’s Fighting for a Hand to Hold is “a necessary book,” wrote one juror, “not just for medical workers who provide care for Indigenous children, but for civil servants who proportion this care, and especially necessary for Quebec politicians who continue to deny systemic racism against Indigenous people and other racialized minorities.” 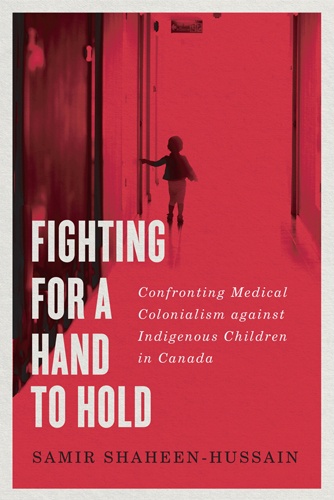 One juror wrote that Fighting for a Hand to Hold is “a necessary book.”

The author, a pediatrician and assistant professor of medicine at McGill, was a key organizer of a successful campaign to pressure the Quebec government to allow a parent or caregiver to accompany children from northern Indigenous communities who are flown south for medical treatment.

“I tried to highlight the testimonies, the histories, the stories that Indigenous children, their families and communities have been telling us for years, and years, and years, and that many of us have not been listening to,” Shaheen-Hussain said as he accepted two awards.

These awards and nine others were announced November 24 at a gala held at Montreal’s Lion d’Or. The event was recorded and can be viewed at https://qwf.org/2021awards

Other winners included Mikhail Iossel, a Concordia literature professor, awarded the Hugh MacLennan Prize for Fiction for Love Like Water, Love Like Fire, a collection of semi-autobiographical short stories tracing a man’s youth in Soviet Russia to his immigrant experiences in Montreal.

“Harrowing, hilarious, dark, and devastating,” was how one juror described the stories, while another lauded sentences that twist the reader “through the illogical forces of dictatorship, childhood, puberty, survival, and writing angsty poetry in a communist regime.” One of the book’s tales, Moscow Windows, a juror wrote, is “surreal and realistic…one of the best stories I have ever read.”

Another QWF prize-winner was Monique Polak, who took the Janet Savage Blachford Prize for Children’s/Young Adult Literature for her novel Room for One More, a wartime story of Rosetta, a Westmount girl whose family hosts a “ready-made brother” Isaac, a 16-year-old Kindertransport refugee from Nazi Germany. Polak’s writing style is “just enough,” the jury wrote, “she allows young readers to understand and learn about the horrors of the Second World War, and the terror that the Jewish community endured, in a way that respects their developmental stages, but pulls no punches with the shameful history of Canada’s intolerance and racism. An important story, delivered with aplomb.”

The A. M. Klein Prize for Poetry went to Sarah Venart for I Am the Big Heart, whose poems were described by a juror as, “deceptively compact, yet expansive narratives (whose) details…are warm to the touch.”

The Cole Foundation Prize for Translation to Sarah Henzi for rendering the late An Antane Kapesh’s Je suis une Maudite sauvagesse; Qu’as-tu fait de mon pays? to I Am a Damn Savage; What Have You Done to My Country? Henzi said she was “at a loss for words” at winning the award. “An Antane Kapesh’s work is so important and has not been heard, and it is all because of the language problem…this award goes to her family.”

The Judy Mappin Award for outstanding contributions to English-language literature in Quebec to bookseller Richard King, founder of Paragraphe Bookstore, and writer H. Nigel Thomas, whose teaching and founding of Kola magazine has been transformational for Black writers in Quebec.

The QWF College Writers Prize to Julian Button-Nadon of John Abbott College for his short story, A Fisher’s Parade, and the carte blanche Prize for best contributions to QWF’s online magazine to Noa Padawer-Blatt, for Tricks (Issue 41).

Christopher Neal is a board member of the Quebec Writers’ Federation.