A circuit of illumninated and interactive artworks

For its 12th edition, Luminothérapie is giving the Quartier des Spectacles a festive touch! Comprising luminous and interactive works, this colourful series of installations will be open until February 27, 2022. New installations and an original video projection will appear alongside some old favourites, and a moment of sound and light will bring everyone together in a grand celebration of Montreal in winter – ebullient, rhythmic and warm. Come bask in glorious light!

Icebergs are ancient ice formations shaped by time and the elements, and they make unique sounds. As water seeps into its cracks and crevasses, an iceberg resonates like an enormous pipe organ, its tones shifting and transforming as the ice melts. Inspired by these colossal natural musical instruments, the Iceberg installation consists of a series of illuminated metal arches that each make a particular sound. Arranged to form a tunnel, the arches beckon you to enter and listen to – and even play – the giant organ.

The sounds and light travel from one end of the musical corridor to the other. Iceberg’s sound and light ambiance, evoking the pure far north, transform in response to your presence. Human activity warms the gargantuan ice blocks – a palpable sign of climate change – and transforms their original form into a visual and auditory symphony. 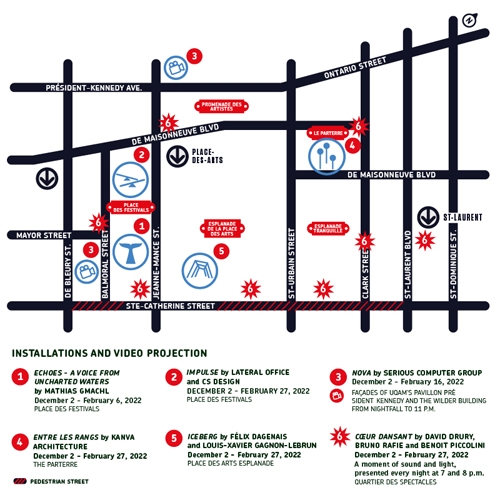 Luminothérapie is Quebec’s largest competition for temporary public art installations. Each year, Luminothérapie presents an original, interactive and captivating winter experience in Montreal’s Quartier des Spectacles with a major installation in Place des Festivals. In 2020 and 2021, special editions took place in the Quartier, with a series of installations and a moment of sound and light for an extended experience. Luminothérapie seeks to spur creativity in the design of urban installations and digital art. Several cultural districts around the world have shown interest in its interactive art installations created for public spaces by local artists and creators. Since 2016, 12 works created for the Quartier des Spectacles have been exhibited on nearly 100 occasions in more than 50 cities in Canada and around the world.
www.quartierdesspectacles.com