illumi Laval – A New Dazzling World of Lights
by Cavalia

The largest light, sound & multimedia show in the world!

More than 80% of the light structures are brand new creations! 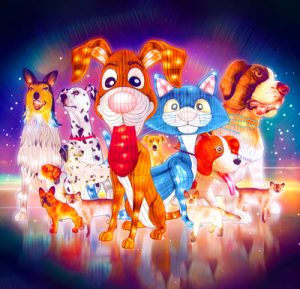 Dune palace – Two majestic elephants welcome you to this universe straight out of the Sahara Desert.

Winter wonderland – A dazzling ice castle will take you back to your childhood and to the chill of winter. An Elf House is nestled at the very centre of a multicoloured fir tree forest.

Garden for giants – Watermelons and strawberries that seem straight out of a comic book, along with cherries and lemons with outsized smiles, mingle merrily with joyful tomatoes and eggplants.

The scarlet spiders – Walk the line between fear and laughter, in a world where these omnipresent spiders reign supreme.

Imaginary animals – In this world, when one animal touches another, they combine to form a new creature. Feathered crocodiles, speedster elephants with butterfly wings, hippopotamuses flaunting their dragonfly wings, zebra-striped lions and horse-headed bird

Martian forest – Martians who landed at illumi used their power to transform this perfectly average forest, converting our firs and maples into multicoloured, animated geometric structures used as devices to communicate with the citizens of their distant planet.

Multicolour flight – 1,500 birds of all types and colours take you under their wings, for an illuminated flight filled with song to a starry sky.

Jurassic kingdom – Some 50 gigantic dinosaurs, including 18 animated Tyrannosaurus rex, Velociraptors, Brachiosauruses and Triceratops, roar in the night to protect their vast sacred territory. 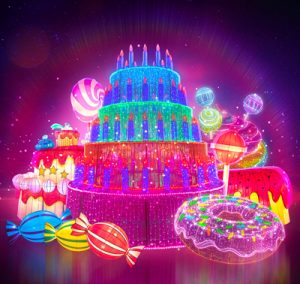 La dolce vita – A gigantic luminous Roman gladiator, being drawn by two horses, stands in the middle of life-sized reproductions of the Roman Coliseum, the Trevi Fountain and the canals of Venice.

The egg-ceptional farm – The chicken coop, the barn, and the farm animals, including friendly chickens, are a nod to rural Quebec.

Submarine tunnel – A virtual portal to the depths of the ocean like you’ve never seen before thanks to immersive projections on a 180-degree dome.

Candy blizzard – Decadent cakes, ice cream cones fit for Giants, gargantuan lollipops and all kinds of candy are now a part of the dazzling light adventure.

The cavalia horses – A colossal herd of 200 equines, inspired from Cavalia’s white horses, awaits you in this alternate world, for an epic imaginary ride filled with beauty, mystery, majesty and horsepower.

The missing pirates! – Guided by the illumi lighthouse beam, a privateer and his mates anchored and abandoned their ship in Laval before mysteriously vanishing.

Draw me illumi – Some 6,000 entries were received in this province-wide contest. Three grand prize winners and 60 drawings made by children aged 3 to 17 during the pandemic were selected and transformed into original light structures, each more inventive than the last.

The illumi tree and its village – illumi’s icon, a majestic 47-metre tree of lights, the size of the Statue of Liberty, is visible for kilometres around. Its unparalleled display and brilliance guides visitors to the world’s largest multimedia, sound and light show.

On foot – A safe and clearly delimited three-kilometer route allows visitors to wander at will through each of the universes.
By car – A new configuration of the car route allows visitors to experience the magic of this nighttime adventure, with their family bubble, cozied up in the comfort of their car.
Free parking is available, as is a free STL shuttle service between Montmorency metro station and the illumi site.

A limited number of entries are available per day, per time slot and per experience. Tickets must be purchased in advance. Tickets are exclusively on sale online.