Dunedin Consort is one of the world’s leading Baroque ensembles, recognised for its vivid and insightful performances and recordings. Formed in 1995 and named after Din Eidyn, the ancient Celtic name for Edinburgh Castle, Dunedin Consort’s ambition is to allow listeners to hear early music afresh, and to couple an inquisitive approach to historical performance with a commitment to commissioning and performing new music. Under the direction of John Butt, the ensemble has earned two coveted Gramophone Awards – for the 2007 recording of Handel’s Messiah and the 2014 recording of Mozart’s Requiem – and a Grammy nomination. 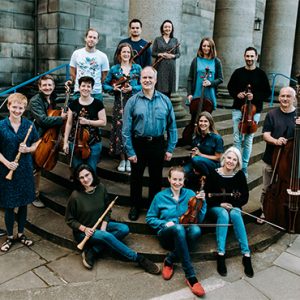 Dunedin Consort performs regularly at major festivals and venues across the UK, including the BBC Proms, Edinburgh International Festival and Lammermuir Festival, with whom it enjoys close associations. In 2017, Dunedin Consort announced its first residency at London’s Wigmore Hall, which continues to this day and complements its regular series of events at home in Scotland, as well as throughout Europe and beyond. The group’s growing discography on Linn Records includes Handel’s Acis and Galatea and Bach’s Brandenburg Concertos, both nominated for Gramophone Awards. Other Bach recordings include Mass in B Minor, Violin Concertos, Magnificat, Christmas Oratorio, Matthew Passion and John Passion, which was nominated for a Recording of the Year award in both Gramophone and BBC Music Magazine. A recording of Handel’s Samson, in its first version of 1743, was released in October 2019, receiving Editor’s Choice accolades across the board.

Alongside its performance and recording work, Dunedin Consort is committed to a wide-ranging education program both in schools and in the wider community. In inspiring and encouraging musical participation, developing vocal skills and fostering a love of classical music, historical performance and new music, Dunedin Consort aims to develop and nurture its potential audience and to encourage the performers of the future.

Program
It’s all too easy to take Handel’s Messiah for granted. This extraordinary and enduring work has become a staple of the Christmas season, with its glorious arias and choruses ringing out in concert halls around the world. But with Dunedin Consort it never loses its magic. Performed by their lithe ensemble of just 8 singers and 15 instrumentalists, Handel’s music remains as crisp, powerful and uplifting as it was at its first performance. Christmas just wouldn’t be complete without it!