Dr. Donald Vinh is a talented medical researcher and practicing physician who is recognized as one of North America’s leading epidemiologists. In 2020 Dr. Vinh was the Canadian lead researcher who identified a component in the diagnosis of COVID -19 in some patients, and a corresponding treatment. He’s energetic, possesses a natural curiosity and his passion for research that is relevant to his patients is fueled by a work ethic passed on from his grandparents who escaped South Vietnam as boat people.

Dr. Donald Vinh’s impressive intellect is complemented with a personal drive that is part of his genetic makeup. His grandparents escaped South Vietnam as “boat people.” While studying in Paris when Saigon fell, his parents could not return to their home country, and so they came to Quebec.

During the COVID-19 pandemic, Dr. Vinh was a sought-after medical expert on local and national television networks. His ability to explain complicated medical issues in easy-to-understand plain language made him popular with viewers and on-air news anchor personnel. Locally, Dr. Vinh was on CTV with Mitsumi Takahashi every two weeks.

Dr. Donald Vinh is a leading researcher into COVID-19 and his
expert opinions have been popular on television, radio and
print media

“My grandfather was a successful pharmacist in Saigon, where he owned a few pharmacies. As we recently saw with the rapid fall of Afghanistan, he never thought that the country would fall so quickly. He and my grandmother escaped with the clothes on their back and some money in their pockets. My grandmother was better-prepared, having already packed her jewelry, knowing that she could sell if for cash as needed. They were crammed onto a boat with hundreds of other people and were taken to a refugee camp on Guam.”

“My parents were doing graduate studies in France when Saigon fell, and they decided to come to Montreal because they spoke French. They brought my grandparents to join them here. My grandfather was able to get work as a pharmacist, and my grandmother worked in a sweatshop. It’s hard to imagine what it was like for my grandparents to go from a comfortable lifestyle to being on a crowded, fetid boat and then living in a refugee camp. That odyssey of my grandparents led to a strong work ethic in our family. You carry the weight of that history.”

“My parents settled in Cote-des-Neiges when they first arrived in the 70s, partly because there was a large Asian community there at the time. They were completely unprepared for their first winter here. They didn’t have boots and my dad tied plastic bags over his shoes to take my brother to school. My Dad got a better job at a pharmaceutical company, and we moved to Town of Mount Royal. My father developed two medical products that are still used on medicine today.”

“My brother got into Selwyn House on a hockey scholarship, and I followed him there after going to primary school in TMR. My Dad worked full time, and he also worked Friday nights and Saturdays at a pharmacy. At some point I did realize that my parents busted their butts to make private school happen for my brother and me.”

“While I was studying immunology at McGill, I met some of the ‘right classmates.’ We asked ourselves, how can we use this science thing to do good?”

Don’s answer to that question was to decide to go into medicine, and he applied while still only in his second year of science. “I had never traveled within Canada, and my dad said that he’d go with me if I wanted to do interviews in other cities. I was accepted in a few places and decided on McGill.”

“Dr. Vinh listened to me, but more importantly he heard me”

Don’s father had been promoted and moved to his employer’s head office in Chicago. “When I was halfway through medical school, I had gone down for Father’s Day and was stunned to learn that my dad had been diagnosed with prostate and colon cancer. My medical school agenda changed immediately. For two years I went to the airport every Friday night and flew to Chicago to be with my parents. The fact that this happened while I was in medical school was part of my training… an unfortunate lesson.”

“I was hyper driven to help my dad. I wanted to cure him. I’d go to the library and internet, looking up previous research – trying to find a clue that had been missed or overlooked. How far along are potential treatments. I said to myself; This is unacceptable, we’re failing our patients.”

In our conversation, Don confided; “I was a son on the weekends, and a driven medical researcher during the week. This experience with my dad drove me into research.”

Don did his residency in Internal Medicine at the Jewish General Hospital. It was during his residency that Don decided that he wanted to go into infectious diseases. “My dad had invented an antibiotic that is still used today, and I wanted to see what other infections we could cure.”

After completing his residency, Don wanted to continue his research studies at McGill. And while the university was saying to the provincial government ‘We need this guy!’ the health minister wrote saying; ‘We have no need for infectious disease specialists….” Don remarks: “I still have that letter signed by the then Minister of Health.”

With no opportunity to do research into infectious diseases in Montreal, Don accepted a research position at the National Microbiology Lab in Winnipeg. “At the time, it was a powerhouse of research in infectious diseases. Also, I was now married, and my wife was able to get a job in her field as a medical technician. I did owe my wife a honeymoon – so we made it Winnipeg. We were there for two years, and then came back to Montreal. McGill had agreed to recruit me back.”

Don continued his research and medical duties. “I had a patient who had a bad case of strep throat that damaged his kidneys and caused wild temperature swings. I asked myself, ‘Why is this guy so sick?’ Most people don’t get this sick from a strep throat. Books didn’t give an answer, and the attending physicians were treating his symptoms, but were not investigating the cause of his sickness.”

“I wrote to Steven Holland at the National Institute of Health in Maryland. The NIH is a powerhouse medical research center with $billions in funding from the US Government. To my surprise – he wrote back to me! He made some suggestions, and we struck up a conversation. Pretty soon, Steve invited me to come down to work at the NIH in Maryland.”

Don packed up his wife, and now two children, and the young family moved to Maryland. “I learned how to better formulate questions scientifically and I had very productive post-doctoral studies. We discovered a new disease, causes of infections and causes of Leukemia and corresponding treatments. For Leukemia, we discovered that (bone marrow) transplants are now an effective treatment.” 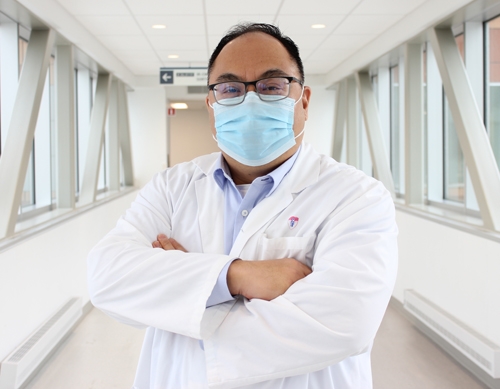 Dr. Donald Vinh one of the foremost experts in genetic diseases related to infection and immunity in North America

Don and his family were scheduled to be in Maryland for six years but returned to Montreal after 3 ½ years. “Essentially, we couldn’t afford to stay there. I was using my line of credit and other mounting debt to finance our stay, and it wasn’t sustainable or fair to my family.”

“I came back to McGill and received a lukewarm reception from the then Chair of the Department of Medicine, who said that infectious disease research was ‘unlikely to happen here’. Fortunately, I had an understanding mentor, and I was squatting in his lab, and working as my own research assistant.” Don worked as a physician during the day, and did his research in the evenings and on weekends. “It was emotionally difficult for both me and my family. However, being a working doctor provided an income for my family and enabled me to pay off the debt that I had accumulated in Maryland.”

Don’s research led him to observe that some patients had a genetic makeup that caused them to develop a particular disease. This opened new avenues of research. “I applied and was accepted by the FRQS (Fonds de recherche du Québec en santé). The funding goes in four-year blocks, and it has been immensely helpful. I’ve been able to develop new treatments and to publish in high impact journals. I’ve gone from having not much support to being well-supported.”

“We’re now receiving samples from national and international centres like Harvard for us to examine. We look for rare diseases and the genetic make-up of the patients to see what treatments we can develop. Without a diagnosis, how can we treat a patient, and moreover, not make their situation worse.”

Don states: “I want my research to be used to help the patients that I see in my role as a doctor. I had one patient come to me saying, ‘I’ve been sick all my life – can you help me?’ Shawnea Roberts said of her first meeting with Don; “Dr. Vinh promised to find the gene that would explain all of my health issues. That first meeting with him had me and my mother in loud, heaving tears. My mom jumped up and hugged him at one point.” Don subsequently enrolled Shawnea in genetic testing and has vowed to find the underlying cause of the illnesses that plagued her throughout her life.

Don’s ‘star status’ as a medical researcher came to the fore during the COVID-19 pandemic. He is the Canadian lead researcher on a team that includes scientists from the NIH (his previous employer in Maryland) and the Rockefeller Institute. “We were able to identify the genetic makeup in different age groups of the population, and therefore how to treat them when they contracted COVD. We published our results in SCIENCE, a leading medical magazine. Our discovery was named the Top Discovery of 2020 by Nature Magazine, which is a competing scientific journal – even though we didn’t publish in their magazine.”

There have been happy and unexpected consequences resulting from all the research into treatments and vaccines to combat COVID-19. Don adds; “We’ve discovered that some of the treatments are also effective in treating Hepatitis C and Multiple Sclerosis.”

Dr. Donald Vinh has shouldered the weight of his family’s history to succeed in his chosen field and to contribute to the country that welcomed his grandparents and parents. We are fortunate that his perseverance has led him back to Canada and Montreal, where his lab research is bringing hope and successful treatments to his real-life patients.