Costa Rica is one of the few destinations in the world where it is whale season year-round. However, the fall and winter months are often considered the best times to spot humpback whales in Costa Rican waters. 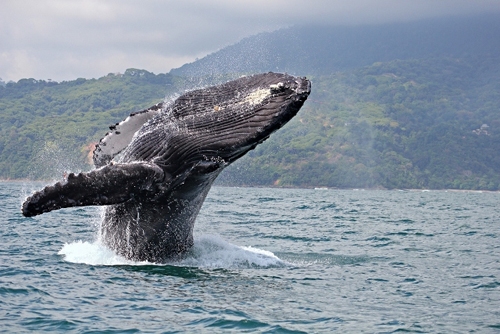 Named after the humpback whales that migrate to the park in mid-July and October, and again in December through March, the Marino Ballena National Park is located in the South Pacific coast at the footsteps of the community of Uvita – Bahia Ballena, in the province of Puntarenas, Osa, Costa Rica. Established in 1992, Marino Ballena’s is one of the country’s newest national parks and is committed to the conservation of the rich marine ecosystems found within its boundaries. In fact, the park contains some of the largest coral formations on the Pacific side of Central America.

The migration pattern of the humpback whales from Antarctica to Marino Ballena National Park, has occurred for thousands of years and is considered one of the longest migrations of any known mammal. The humpback whale’s arrival coincides with the arrival of other marine mammals, including pilot, byrde and orca whales, and three resident dolphin species. Costa Rica’s Keto Foundation developed a voluntary distinction initiative for local marine tour operators to follow, which assists travelers in identifying responsible and conscientious operators when they choose to take a whale watching tour. The guides are careful to operate tours in a responsible way, so as not to disturb these beautiful mammals during their great migration.

On land, Marino Ballena National Park and its surrounding community of Uvita, including its tourism chamber and all tourism companies, have developed a plastic-free initiative, seeking to discourage the consumption of single-use plastic in the community, and raise awareness of the impact plastic can have on the biodiversity of marine and coastal environments. Biodegradable alternatives to plastic made from environmentally friendly materials such as corn starch and sugarcane bagasse have been developed for visitors to use during their time in the park. 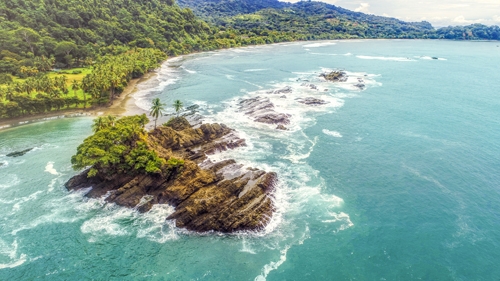 Playa Uvita is a good place for horseback riding, swimming or just walking on its sandy beach. The beach is located in the protected area of the park and fishing of the marine life is strictly prohibited. Snorkeling and scuba diving are favorite activities as are visits to the mangroves where green marine iguanas, olive ridley and hawksbill turtles gather.

In addition to whale watching, one of the park’s main attractions is “El Paso de Moises,” translated to the “Passage of Moses” in English. This phenomenon happens at low-tide when the water gets so low it creates a passageway like the one from the Biblical story. For years, scientists and visitors alike have been captivated by this unique sight. During low-tide, visitors can take a stroll to the end of the whale’s tail, or “tombolo.”

Costa Rica
Costa Rica extends majestically from the Pacific Ocean to the Caribbean Sea with a width distance of barely 200 miles. Its land portion occupies only 20 thousand square miles. Though not large, the country boasts variations in landscape and climate from province to province that are truly amazing. www.visitcostarica.com