My personal fascination with boutique hotels is directly connected to Le Germain Québec as this hotel was basically the starting point for the genre in Canada when they first opened their doors in 1997. Since then, this Quebec-born brand of 18 boutique hotels has methodically expanded into 7 provinces as far west as Calgary and as far east as St. John’s, Newfoundland. 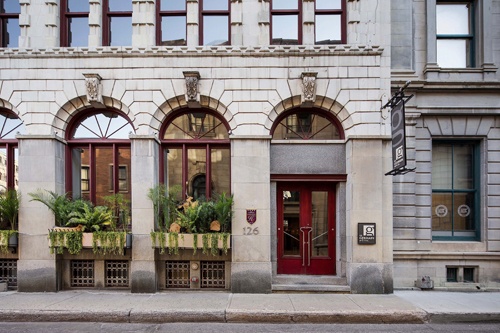 In addition, they have also scaled their own offerings to meet the varied needs of their clientele. The original Le Germain Hotel brand caters to a more discerning traveler and their Alt Hotels appeal to a younger, more hip and budget-conscious adventurer. Their newest offering, Escad Hotel, is the longer-term stay solution for business travelers or families looking for a “home base” with additional amenities such as kitchenettes and larger rooms. Whichever way you look at it, watching the Germain Hotels’ evolution has been a study in a hospitality family’s marketing and entrepreneurial genius.

In spite of my fascination with Le Germain Hotel Québec, I had not stayed at this hotel until recently. While I have checked-in to many of their other properties along the way including their first hotel in Ste-Foy (originally opened as the Germain-des-Prés  and currently under the Alt banner), I had never stepped into the lobby where much of the story began. Well, I am glad I finally made the pilgrimage. 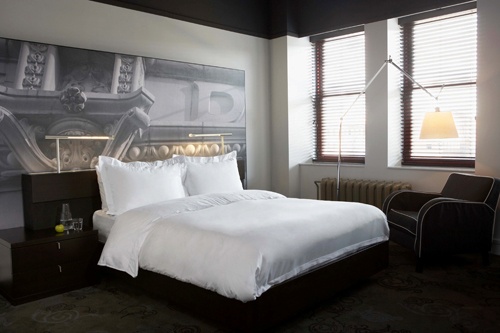 While the Germain family have made their mark in the hospitality history of the city of Quebec, the location of Le Germain Québec is itself immersed within this 413-year-old city’s economic past. Not only is Le Germain Québec located on a street in the city’s historic ‘Lower Town”; rue St. Pierre was once lined with banks and insurance companies. At one time this was the centre of banking and commerce for all of Lower Canada. In fact, one of the buildings that currently houses about half of Le Germain Quebéc’s 60 rooms was the city’s first “high rise” (with eight floors and had the city’s first elevator) and was also once the home of the Quebec stock exchange within this Bank of Hochelaga building (built in 1918). Remnants of the bank are evident within the hotel when you find yourself walking through vintage bank vault doors on some of the guest room floors. The building that contains the other rooms was originally the Dominion Fish and Fruit Market (opened in 1912) and at first, this hotel property was called “The Dominion 1912” before being rebranded Le Germain Hotel Quebec in 2007.

If you walk along rue St. Pierre and look up on top of the many grandiose bank columns, you will see the names of the financial institutions that once thrived here such as the Bank of Commerce or National Bank and so on. Unfortunately, the stock market crash of 1929 decimated much of this sector’s prosperity. Today the banks are long gone with their stately architectural gems now occupied by other boutique hotels, fine restaurants, art galleries, professional offices and antique shops. 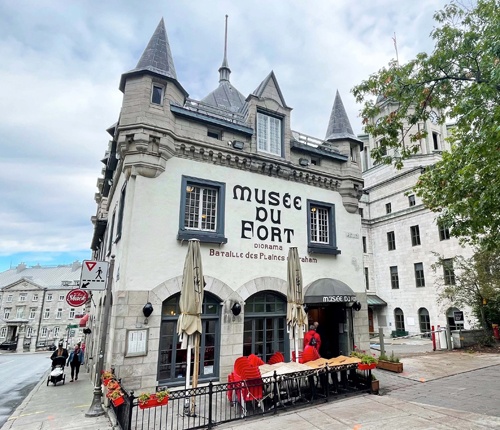 In chatting with the hotel’s General Manager, Sarah Côté, she informed me that the hotel’s lobby was created to feel like you are hanging out “in a friend’s living room. We want our guests to feel like they are at home.” With an inviting fireplace serving as the lobby’s focal point, sharing tables where laptops are busy and where conversation between strangers flow easily, all the while surrounded by wonderfully curated art (always featuring and supporting local artists), it becomes evident that Le Germain Hotel Quebec has succeeded in this regard.

The lobby extends into the two buildings and also to an outside terrace where bar service is available for those who wish an afternoon beer, pre-dinner cocktail or a post-meal digestif. Complimentary coffee service is available all day long here, and is where a delicious continental breakfast buffet is served with local cheeses, fresh fruits, fresh croissants and rabbit & apple rillette, (a must-try), are on offer, meeting most travelers’ morning meal preferences.

Le Germain Hotel Québec does not have its own restaurant, partly because “we’re surrounded by so many great tables” as rightly observed by Côté.

One of these “tables” that was recommended to me by friends as well as by the hotel’s concierge (a clé d’or, Francis Belanger) was L’ Échaudé, located on nearby rue du Sault-Au-Matelot (literally a two minute walk from the hotel). L’ Échaudé was one of the first restaurants to open in this neighbourhood when Lower Town was first “reclaimed” through a cooperative of business owners wishing to clean up an area which had become a no-man’s-land inhabited by transients and abandoned storefronts.

As part of this economic renewal that now represents one of the country’s most charming and photogenic destinations, L’ Échaudé opened its Parisian-style restaurant in 1984 and has been packed ever since. Having now eaten there I understand why! My meal began with a tray of fabulous Raspberry Point oysters, then transitioned to an unbelievably flavourful white fish dish of  “cardeau” (Summer Flounder) served on a bed of perfectly roasted tomatoes with green lentils, and ended with a jaw-dropping “Frangipane, poire pochée, caramel, sorbet poire et gingembre” (English simply does not do this dessert justice!). The whole experience, including its classic Parisian brasserie décor and service, was exceptional!

Le Germain Hotel Quebec has a close relationship with the propriétaires of L’ Échaudé who will provide their guests with “room service” (depending on the current health protocols).

After you have satiated yourself with fine cuisine a necessary walk throughout the area will take you past the Musée de la civilisation or along the most picturesque rue Petit-Champlain which is the photographic subject of many a Canadian Christmas card and a gift shopping destination. 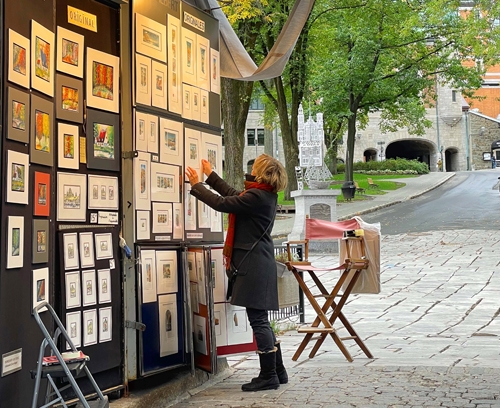 An artist hangs her works for sale in the shadow of the Chateau Frontenac
Photo: AJ Twist

Alternatively, you could take the ferry across the St. Lawrence River to the town of Lévis. It is from the water that many say the best views are found of this incredibly romantic city. And who does not enjoy a ferry ride? If you are interested in a quick 30-minute review of this city’s military history events (some of which involved dramatic face to face combat on the plains of Abraham) take the funiculaire up from rue Petit-Champlain and visit the Musée du Fort  where the story is told using miniature replicas.

Exhausted from my day exploring the sights of this beautiful city, it was time to enjoy my room. Here I had a bird’s eye view of the famous rue Sous-le-cap which dates back to the time of New France and one of the most photographed streets in the province with its unique spider-web of aerial staircases.

As I eased into my luxurious 330 count Egyptian cotton sheets I wondered if I might be able to take these with me? Thanks to the entrepreneurial spirit of this organization, I was informed the next morning that all the bed linens, soaps (from Montreal’s Ruby Brown) and pillows are available online through a partnership with the department store Simons, another Quebec retail success story.

All in all, I was thrilled to finally experience Le Germain Hotel Quebec for myself instead of just reading about it. It will be on my short-list for all of my potential stays in this fabulous city going forward! 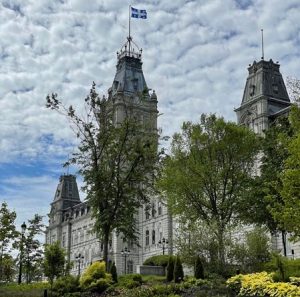 One of Quebec City’s most beautiful buildings in a city filled with stunning architecture is the province’s parliament building where the National Assembly is housed. Surrounded by lush gardens, the setting is certainly worthy of its capital city stature.

Unknown to many, within these hallowed halls, sits a 100-year-old restaurant, Le Parlementaire. It is associated with the Institut de tourisme et d’hôtellerie du Québec (ITHQ), the province’s incubator for culinary talent. Le Parlementaire has only recently re-opened to the public following extensive renovations restoring the room to its original glory. Before its closing it had been legendary for its weekend brunches but, for the moment, only operates during the weekdays for lunch (11:30am-2pm). 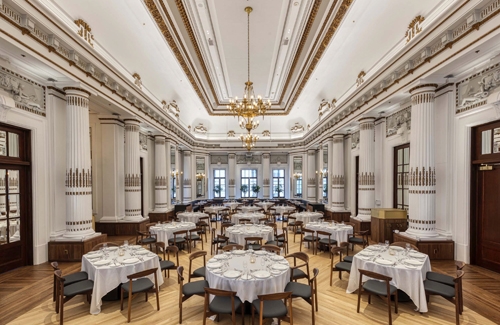 The menu is true to its region drawing upon local producers located on Île d’Orléans, the Charlevoix, Côte-de-Beaupré and Côte-du-Sud.

Come to the parliament buildings for the heated discussions on the province’s future, stay for the food!