See for the first time or re-live the experience of this tour de force performance. Scapegoat Carnivale, in collaboration with the Conseil des arts de Montréal en tournée, is honoured to remount the award winning one-act play YEV, about the unusual relationships between a Siberian hermit, a McGill biology student and a retired Russian geologist. The premiere at MAI (Montréal, arts interculturels) in 2019 was nominated for eight META awards including Outstanding Text, Outstanding Direction and Outstanding Lead Actor (Sasha Samar), and won the Outstanding Independent Production. In its compelling 40-minute run time, YEV dramatizes how even small interventions from the outside world can upset the balance of fragile micro-cultures. Lauded theatre artists Scapegoat Carnivale Co-Artistic Directors Alison Darcy & Joseph Shragge are also the co-writers/directors of YEV, with Darcy now adding set designer to her credits. The show, in English and Russian, runs from October 20-22 at select Maisons de la culture. Tickets are free, reservations strongly suggested.

“The crop was dead. I didn’t have much salt. The spiders were the one’s living in my home and I was outside. I stopped remembering the sound of father or my sister or myself.”—Yev 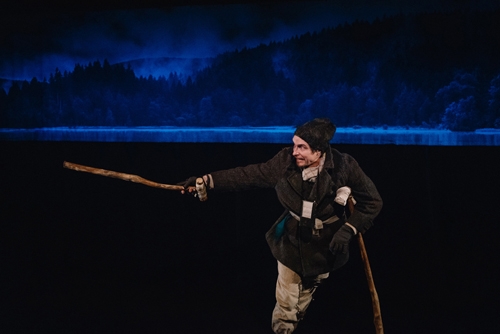 Yev is a hermit living in a remote region of the Siberian Taiga, the sole survivor of a family who fled civilization for fear of religious persecution. Matthew, a biology student with a social anxiety disorder who is curious about Yev’s solitary life, begins a correspondence but soon discovers that she is not entirely alone. As their camaraderie deepens, so do complications between Yev and her possessive neighbour Savorin, a geologist who violently disputes her version of their shared story. Through layered, complex unfolding, the play slowly unearths the truth about these relationships forged amid seclusion. YEV, is loosely inspired by the Siberian hermit Agafia Lykova, among others.

Darcy and Shragge joined writing forces to explore what it means to physically, mentally and emotionally live off the grid as part of Infinithéâtre’s The Unit and the National Arts Centre’s The Collaborations program. The end result is a fresh, creative piece of theatre designed as a triptych, revealing the narrative through a captivating fusion of styles including epistolary storytelling, dramatic live translation and highly theatrical physicality, all exploring different perspectives of Yev’s past and present.

“Without a doubt, one of the most beautiful English-language theater experiences I’ve had on Montreal stages.”—Yanik Comeau, Théâtralités and ZoneCulture

“We’re so happy to keep telling this story,” Shragge said regarding the remount, “its theme of connection-through-distance resonates a lot with me these days.” Darcy, who plays Yev, said that “remounting this show while still in the midst of this pandemic is particularly meaningful as our characters each struggle with what it means to be alone. Whether they live in solitude by default, are seeking an escape from it or imagine it as their salvation, they each reach for connections as they isolate themselves even more.” Actor Trevor Barrette echoed Darcy’s sentiment, “I’m really looking forward to getting back into Matthew’s shoes and to sharing our story about isolation and connection twenty months into the pandemic.”