The Tricolour Organ and Piano

It is rare indeed for the organ and piano to come together on the same stage for a duo concert. Rarer still is the convening of two brilliant artists such as Éric Le Sage, who makes his first OSM appearance, and the Orchestra’s Organist Emeritus Olivier Latry. Their vividly coloured French program presents original versions of works alongside special musical arrangements, resulting in keyboard playing that is both elegant and convivial.

Acclaimed as an eminent international ambassador of the organ, Olivier Latry has performed in countless prestigious venues and been a guest of many prominent orchestras led by renowned conductors. He has numerous recordings on major labels and an impressive number of premieres of new works to his credit. Appointed titular organist of the grandes orgues of Notre-Dame de Paris at only 23 years of age and Organist Emeritus of the Orchestre symphonique de Montréal since 2012, Latry is a versatile, ingenious, and daring artist who explores all the resources of which his instrument is capable. He is also endowed with exceptional improvisational gifts.

In March 2019, Olivier entered into collaboration with La Dolce Volta label, launching his initial album Bach to the Future. In 2021, he released Inspirations, featuring works by Liszt on the organ of the Philharmonie de Paris.

Olivier Latry is Organist-in-residence with the Dresden Philharmonic for the 2021–2022 season and is currently the William T. Kemper Artist-in-Residence at the University Kansas in Lawrence. 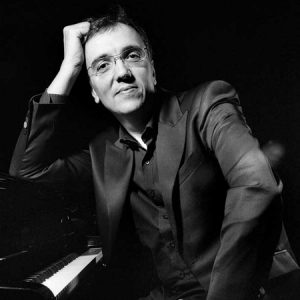 Eric Le Sage is established as the representative of the French piano school, regularly boasted for his very subtle sound, his real sense of structure and poetic phrasing. Already when he was 20 years old, the Financial Times had described him as “an extremely cultivated disciple of the great French tradition of Schumann piano”. In 2010, die Zeit, praised his “ideal French piano aesthetics and clarity”

Note: this concert is performed without the orchestra
Thursday, November 4, 2021 at 7:30pm
To purchase your tickets visit: www.placedesarts.com