The world-famous Jerusalem Baroque Orchestra will join musical forces with Montreal’s Ensemble Caprice to perform works by Rameau, Charpentier, Telemann and three songs by Montreal composer Nico Jaap Hamburger at the Rialto Theatre on Saturday, October 23. David Shemar will conduct the works by Rameau and Telleman, and Matthias Maute will conduct the pieces by Charpentier and Hamburger

The Jerusalem Baroque Orchestra is the first Israeli ensemble to perform Baroque music on period instruments and with Baroque techniques. The orchestra was founded in 1989 by harpsichordist Prof. David Shemar, who continues to be its Musical Director.

In a recent interview, Ensemble Caprice founder Matthias Maute noted; “This is the biggest musical exchange between Israel and Quebec – possibly Canada. Musicians from the two orchestras will perform as one large ensemble for the Montreal concert.” Matthias continues; “From our end, we leave our comfort zone for a whirlwind of ideas and inspiration when we take our places alongside other accomplished musicians. It’s always been our mission to keep trying our new musical ideas and experiences. Music is a wonderful way to span the difference between cultures.”

“We start off as colleagues and we end up as friends.” 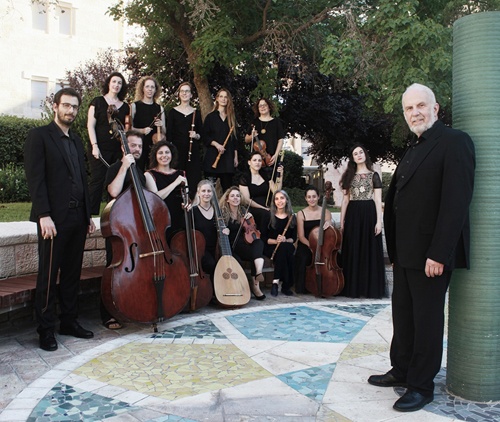 To further illustrate the power of music, Matthias recounts how the musicians of Ensemble Caprice and the singers from Ensemble Vocal Arts Quebec shared their music during the past two summers of the pandemic. “We normally perform seventy concerts per year, but that came to an end in 2020. During the past two summers, we went door-to-door in less affluent neighbourhoods, places where you might not think people would enjoy classical music. We went in pairs, with one musician and one singer and we performed on the sidewalk in front of their house or building. We gave 9,000 mini-concerts, and we were curious to see if classical music would mean something to these audiences. It was a huge success! It was touching to see how much people appreciated our music.” Ensemble Caprice won the 2020 OPUS Award for Musical Event of the Year for their impromptu concerts.

“We want to bring that personal touch to the concert halls, to adapt our mini-concert experiences to larger halls.”

During the world-wide Covid-19 pandemic, the Jerusalem Baroque Orchestra continued their artistic endeavours as much as possible; and have been performing chamber concerts that are broadcast live to audiences in Israel and abroad. Most recently, JBO presented a Vocal Fantasy ONLINE Festival, broadcasting 5 concerts, including Handel’s St. John Passion and other chamber, operatic and choral concerts that took place in various locations in Jerusalem. The live-streaming performances were met with enthusiastic online audiences online and garnered wonderful reviews. Some of the recent online concerts can be viewed in the orchestra’s YouTube page: https://www.youtube.com/channel/UCxY09aq0T8UnAmD1UcPSorw