The exhibition DIVINA DALĺ invites you to discover the imaginary world of Dante’s Divina Commedia illustrated by the Great Master of Surrealism, Salvador Dalí. Come experience a more intimate Dalí through 101 of his works, and travel through the dimensions of Hell, Purgatory and Paradise towards the discovery of a monumental piece, created in 1944 and never exhibited until today.

Dante’s Divina Commedia, illustrated by Salvador Dalí, is one of the greatest achievements in the history of modern art. Presented in Montreal for its world premiere, Divina Dali revisits this summit meeting between two legendary artists in a monumental immersive experience. 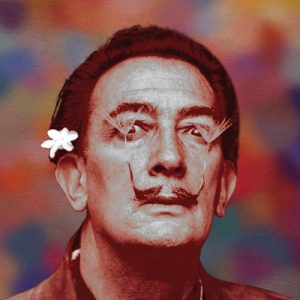 This exhibition is also the setting for several unpublished works, including photos on Dalí never exhibited to date, as well as the unveiling of a monumental artwork of 600 pc. La Girafe en feu has succeeded in the master stroke, to bring to Montreal this art piece designed in 1944 following a collaboration with one of the great Masters of the 7th Art, Alfred Hitchcock, for the film Spellbound starring Ingrid Bergman and Gregory Peck. A unique canvas to the world of exhibitions. The work is exhibited in the “Purgatory” space of the exhibit Divina Dalí.

Considered one of the most famous and prolific artists of the 20th century, Salvador Dalí pushed the aesthetic boundaries of art. Leader of the Spanish “avant-garde”, he was interested in new sciences as well as the Freudian theories of the unconscious. He also developed an artistic technique inspired by psychoanalysis, paranoia-criticism, which became the true creative engine behind the surrealist movement (a movement that Dalí is considered a leading figure within). His most well known painting, The Persistence of Memory – often called The Melting Clocks or Soft Watches – best symbolizes this surrealist style. First shown in Paris in 1932, the work would be exhibited two years later in New York, where it has remained since.

SALVADOR DALÍ
Sculptor, engraver, scriptwriter, writer, leading figure of the surrealist movement and above of all, most famous painter of the twentieth century. Interested in science, technology, architecture, psychoanalysis and philosophy, he has created a body of work that is both accessible and poetic. Internationally recognized as a multidisciplinary artist with a unique style, and as a virtuoso of image and communication, this great Master has contributed immensely to the arts of the twentieth century. His work is timeless and is embedded in the collective memory. This makes him one of the most timely artists who, still to this day, moves crowds.

By exhibiting the works of the Master of Surrealism in their own particular style, La Girafe en feu ensures that Dalí’s genius, madness, humor, and his passion for science are brought to life in the public sphere.

For more information and to purchase your tickets visit: www.divinadali.com