Sometimes corporations, like people, simply get lucky! Such was the case when the Quebec Hilton’s parent, InnVest REIT, made the excruciating decision to temporarily close their 569-room hotel in Quebec City in September 2019 to undergo a complete renovation. We are not talking about simple room re-decoration here but rather a $75 million lobby to rooftop, exterior wall to inner wall refresh including re-wiring and plumbing for a 24-story hotel that was originally constructed in 1974. 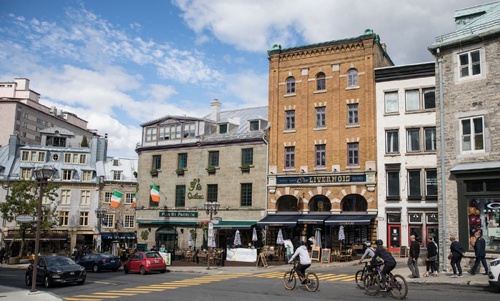 Imagine management’s concern of having their entire staff not working for a year and turning away the guest room and event revenues while they underwent such a project?  Even the Mayor of Quebec, Mayor Régis Labeaume, expressed his concerns that such a major hotel in his city would be out of commission for such an extended period. And then the pandemic hit! Talk about timing!

To plan the hotel’s re-birth and re-design, InnVest hired renowned architecture and design firm, Lemay Michaud, to coordinate all aspects of the renewal concept right down to the choices of artworks hanging in the lobby and throughout each individual room and meeting area (in partnership with Farmboy Fine Arts of Vancouver). During a tour of the property, Gina Guglietta, the hotel’s Director of Sales and Marketing, told us that the team at Lemay Michaud conducted an in depth review of all of the hotel’s previous guest reviews. That research determined that the key features of the hotel were: its breathtaking views, its proximity to the city’s history (the Plains of Abraham, the Fortifications and the parliament buildings – all within view and walking distance), and the importance of the St. Lawrence River on the city. These factors all played into the re-design recommendations that followed. The results, like the views, are spectacular. 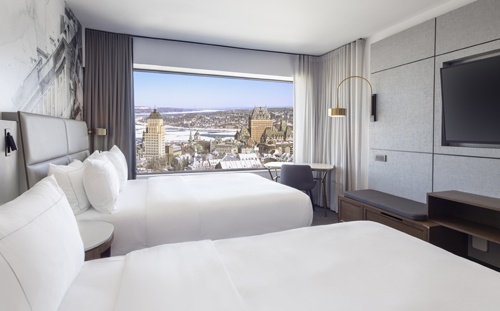 While housed in one of Quebec City’s tallest buildings and directly adjacent to the city’s convention centre, each guest room and suite has the feel of a much smaller boutique hotel along with similar perks such as luxury bathroom amenities, sleek bathroom fixtures, bed linens and stylish furniture design. Attention to the aforementioned connection to history extends to the art installations in each guest room that feature murals of the confluence of city’s unique architectural styles. Photography buffs will be impressed with the eclectic photo collection in the lobby exhibiting images of the city reflecting its 413 years of history.

As part of our tour, Guglietta proudly showed off the city’s largest ballroom on the mezzanine which can accommodate up to 800 guests at a single sitting (perfect for that royal wedding you had planned or for your next corporate conference). The Executive Floor on the 23rd floor features an executive lounge where the most fortunate gather to enjoy the city’s fireworks displays that usually take place during the month of August and on New Year’s Eve. Once again, we had to pause here to absorb the unobstructed panoramic views of the city and river. 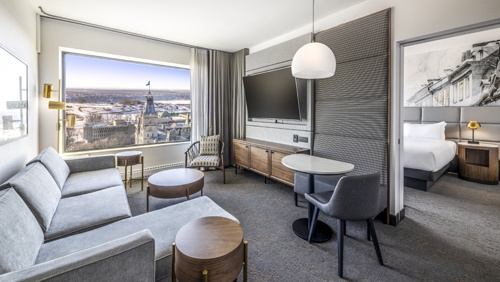 Back on the ground floor, Guglietta told us about their restaurant and bar offerings under the banner of CABU (named after caboulots which were small tavern-like huts operating in winters during the 1800s on the frozen St. Lawrence River “ice bridge” between Levis and Quebec City). Here local Executive Chef Simon Renaud manages the food magic for both the restaurant and banquets. Renaud has cultivated deep relationships with local producers on Ile D’Orleans and elsewhere, to bring an unparalleled ‘farm to table’ culinary experience that will not only appeal to visitors seeking an authentic regional flavour experience but to local diners as well. Plans are in the making for Renaud to take guests on occasional tours of these nearby farms.

For more simple and quick fare, CABU’s café offers morning lattes and breakfast sandwiches for those in a hurry or on their way out the door to enjoy the city. Speaking of which, there is currently a city-wide promotion which gives visitors who book two consecutive nights at a participating hotel, motel, bed and breakfast or tourist residence a $75 pre-paid gift card that can be redeemed at eligible activities, stores, spas and restaurants. Free money with which to explore the city! (See quebec-cite.com for full details and conditions) 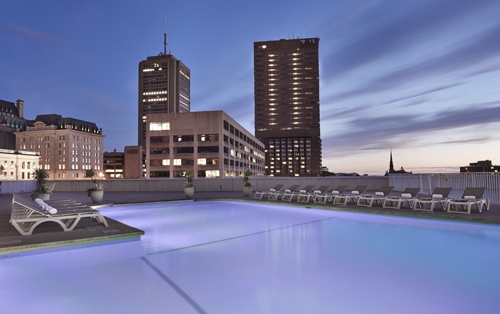 One spot where you might want to cash in your gift card could be the Musée national des beaux-arts du Québec which is hosting “Picasso.Figures– A celebration of the multiform body” with paintings and drawings from one of the 20th century’s most important and prolific artists (and currently, controversial) and not previously presented in Quebec. The exhibition continues through to September 12, 2021. Many other of the city’s favourite museums are also included as options including Musée de la civilisation in Lower Town or the Musée du Fort located a stone’s throw from the Chateau Frontenac. If you find these ideas too conservative for your crew, you might want to consider an evening with Ghost Tours of Quebec where a costumed guide will lead you through “400 years of murder, executions, mysterious ghost sightings, tragedies and hauntings”. This tour comes with a “goosebumps guarantee”.

With our hotel tour now over, we checked into our room, which featured a view that one never tires of. In fact, when it came time to sleep instead of drawing the black-out curtains tight, I opened them as far as they would go so that I would not miss a moment of this experience even in the dead of the night. The glittering night-time lights dancing throughout the horizon and the early morning manoeuvres of the cargo ships did not disappoint! This is one beautiful city and if you want a perch from which to see it all, check into the “new” Quebec City Hilton.