The Montreal Museum of Fine Arts (MMFA) presents Adrift, a summer-long, ephemeral installation on Du Musée Avenue. Created by Collectif Incognito, it integrates a poem by Innu author Joséphine Bacon in tribute to the glaciers, whose accelerated melting is threatening numerous species and populations. Adrift also echoes themes in the exhibitions Ecologies: A Song for Our Planet and Riopelle: The Call of Northern Landscapes and Indigenous Cultures, currently on view at the Museum. 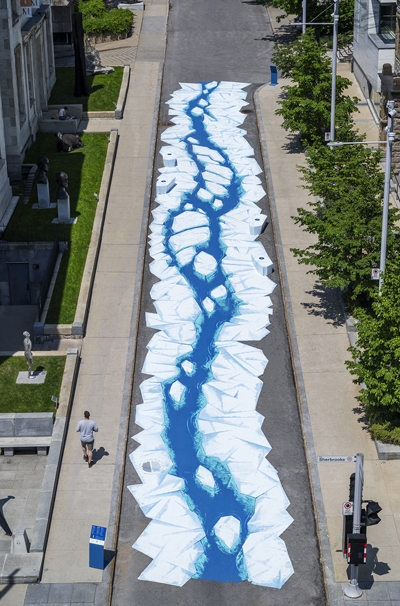 Since 2013, the MMFA has been commissioning creators to design installations that cover the stretch of Du Musée Avenue north of Sherbrooke Street that gets transformed into a pedestrian walkway for the summer. This year, the group Collectif Incognito invites passersby and Museum visitors to meditate on the fragile balance in which nature lies, through the words of Joséphine Bacon, storyteller, lyricist and director, and ambassador of First Nations culture in Quebec and abroad.

Bordered by the MMFA’s CGI and Max and Iris Stern sculpture gardens, the installation forms a stream of ice floes scrawled with the poetry of Joséphine Bacon. The public can sit on one of these glacier-like blocks and scan the QR code with their mobile devices to listen to the poem Adrift, recited in Innu by the author, in French by André Robitaille and in English by Laurence Lebœuf.

“Thousands of years ago, a glacier melt permitted the first Indigenous peoples to settle in territories they inhabit to this very day, in synergy with nature. The installation invites city dwellers to set themselves ‘adrift’ in town and be carried off by a stream as formidable in nature as it is fragile, that reclaims its rightful place at the very heart of a city,” explains Collectif Incognito.

The MMFA is a place of experimentation and discovery, where myriad art forms converge and intermingle. This summer, this interplay is unfolding outdoors on Du Musée Avenue, in the immersive installation Adrift. Sound and visual art produced by Collectif Incognito plunge us into a moving reflection on our ties with nature. We are honoured to have the great Innu poet Joséphine Bacon participate in this project,” adds Mary-Dailey Desmarais, Chief Curator, MMFA.