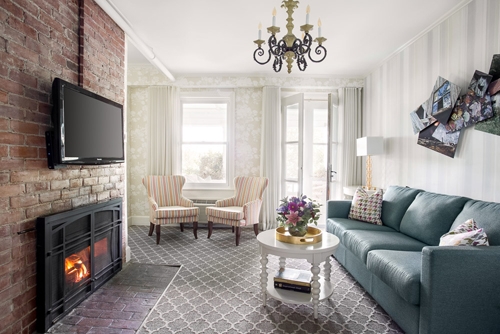 I really did not know what to expect as I headed out of the city to the sleepy town of North Hatley in the Eastern Townships for a mid-week break at the Manoir Hovey. The last time I had been on the grounds was about thirty years ago and I recalled a series of impeccably kept gardens on the shores of Lac Massawippi and a stately manor reminiscent of a southern American estate that could have been transported from the depths of Louisiana. I had never stayed here before but I was anticipating a rather dingy and dated experience. My presumptions proved to be wonderfully wrong!

Despite being in the throes of the pandemic, I was greeted by an incredibly upbeat and cheery staff upon entry. After being shown to my freshly renovated and brightly decorated room, I was treated to a tour of the property by Ryan Jones, from the hotel’s sales department, who has been proudly working here since his mid teens. 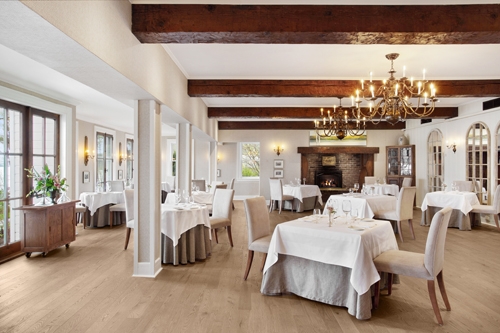 As the property sits on thirty-five acres of birch forest (and, at one time, suitably called The Birches), Jones chauffeured me around the property in a golf cart. While Manoir Hovey features thirty-six rooms and suites and most are located within the manor itself, a number of them are also scattered throughout the property in a mix of freestanding pavilions and cabins. The privacy and security afforded by the separated suites appealed to former U.S. President Bill Clinton and former Secretary of State Hilary Clinton, who have vacationed here a number of times, encouraged by mutual friend and murder mystery author, Louise Penny. She is both a big fan of the hotel and is also its local celebrity. In fact, one of the hotel suites has been recently converted into the “Bellechasse Suite” so-named after the fictional hotel that serves as a setting for a number of Penny’s novels (see side bar for more on the official Three Pines Inspiration Tour). 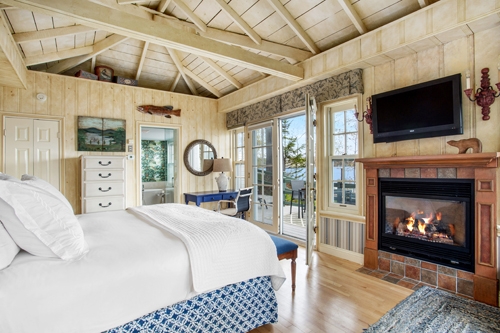 The romantic Cartier Suite sits directly on the lakeshore, complete with its own private dock and water access

Two of these buildings caught my eye including the LeMoyne Pavillion which looked to be the perfect setting for a small family reunion or wedding party with a variety of room price points and able to accommodate 10 adults. We also glanced at the incredibly romantic Cartier Suite which sits directly on the lakeshore complete with its own private dock and water access. As one might imagine; this intimate suite for two appeals to honeymooners and those celebrating special anniversaries and is the suite that is in the highest demand throughout the year.

Back in the hotel proper we walked through the newly renovated dining room which seats seventy-six, has unfettered views of the lake and is adorned by a recently commissioned shoreline landscape by local artist Sara Peck Colby. In the adjoining section of the hotel, Jones excitedly showed off the “Tap Room” which has the feel of a fur trading saloon from the 1700’s, complete with a stuffed trophy head with a place of honour over the spectacular stone hearth, which must be the most popular spot in the region during the depths of winter (the hotel is open year round)! While the main dining room, Le Hatley, features fine cuisine sourced from local farmers and producers under Chef Alexandre Vachon’s delectable leadership, the Tap Room serves more hearty fare as well as a wide selection of local craft beers on tap. 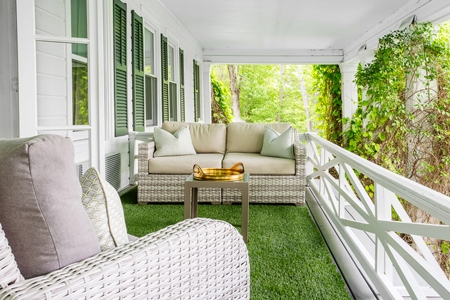 Many rooms have private balconies overlooking the English gardens, pool and Lake Massawippi

Back in my room which had a sizeable balcony and a lovely view of the gardens and the lakefront, I began preparations for my in-room dining experience as the dining room was off limits due to recently re-imposed COVID-19 restrictions. Personally, I love room service so I found this of no inconvenience, whatsoever.

At the pre-arranged time, Florence, my upbeat server, arrived with my dinner’s first course. Little did I know, what a marvellous treat I was about to experience!

I began with a velouté champignons (a mushroom soup) made from paris, shitake and maitke mushrooms and served with a delicate Périgord truffle whipped cream. Spectacular! 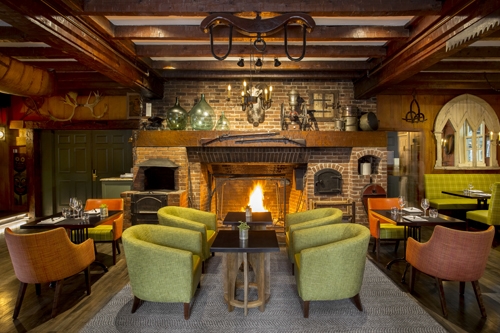 Next up, Florence appeared with a Hovey Caesar salad, made with perfectly chilled sweet sucrine lettuce, fresh herbs (chive, tarragon, mustard) mayonnaise, cold-smoked heirloom chicken breast and wild watercress. Chef Vachon not only incorporates local produce into every meal but also grows or forages many of the ingredients on the hotel property. As Vachon succinctly states “we bring nature to your table”.

Thoroughly impressed with the meal thus far, a perfectly lean cuisine main course of slow-cooked lamb saddle was served with a serving of braised fennel and fresh peas, and was finished with a chocolate mint lamb reduction seasoned with black garlic. Amateur chefs will find themselves inspired to follow Chef Vachon on one of his foraging adventures on the property as he prepares for the next meal (this is one of the many complimentary foodie-related activities available for hotel guests). 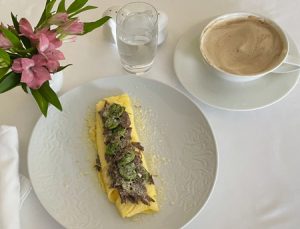 The next morning, after one of the best sleeps I have had in years (which I attributed to the fresh country air and a sumptuous mattress), breakfast was served. I had pre-ordered a goose egg omelette which was stuffed with freshly grated parmesan cheese and roasted shallots, served with duck confit and sprinkled with chef-foraged fiddleheads. Savouring a café latte afterwards, I felt at total peace and contentment. Exactly the sentiment one seeks while on vacation, no? 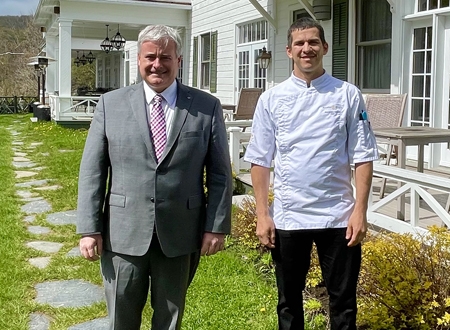 Later that morning I had the opportunity to interview both the Managing Director of the hotel, Jason Stafford, and Chef Vachon in the library by a roaring fire and surrounded by a book collection that apparently dates back to the original owners from 1900. Here I asked Stafford about whether being one of the two Relais & Châteaux properties in Quebec (with Auberge Saint Antoine in Quebec City being the other) was good for business? He told me that being part of that organization really has helped elevate Manoir Hovey’s prestige globally. Plus, being consistently considered as one of the best hotel properties in Canada as confirmed by being voted # 2 by the Travel + Leisure World’s Best Awards 2020 and ranked within the Top 10 Condé Nast 2019 Traveler Reader’s Choice Awards certainly helped.

Stafford is expecting another busy summer season driven mainly by Quebec-based guests seeking both a luxury experience and the great outdoors. With plentiful waterfront activities anchored by an expansive dock (all boats, canoes and kayaks are free for guest use (“we never charge resort fees”), a tennis court right on the waterfront, deeply immersive nature trails, endless biking trails that run all the way to Sherbrooke, curated food excursions to local farms, cheese factories and breweries, it really does feel like a “luxury summer camp for adults;” as so aptly described by Stafford. 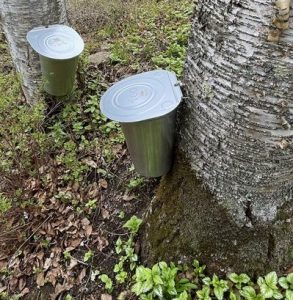 Manoir Hovey’s Chef Alexandre Vachon is striving to make his cuisine less dependent on external sources of food. To this end, the recently renovated kitchen now includes a boiling section in order to make their own maple syrup. Not only that, for two weeks every spring, Chef Vachon and his team tap the many birch tress on the property to make their own birch syrup. Birch syrup has a very distinct taste versus maple syrup and is less sweet. Not much birch syrup is made in this province since it takes 100 litres of birch sap to make a single litre of birch syrup (for maple syrup the ratio is 40 to 1). Chef Vachon uses birch syrup in marinades, vinegars and to finish certain fish dishes and may be the only professional kitchen in Canada to do so.

Additional summer activities this season will include a “fishing experience” complete with a local guide with knowledge of the lake’s best spots ($325 per couple) and a beekeeping tutorial as coordinated by the hotel’s sommelier who also happens to be a master beekeeper ($215 per couple). The more sedate guests may instead decide to partake in a full English tea service complete with crust-less, homegrown cucumber or watercress sandwiches and dessert delicacies served either in the gardens or library or on your room’s balcony.

Whichever your summer passtime, Manor Hovey, is likely willing to facilitate it for you through their Clefs d’Or concierge service if it is not already part of their regular offerings. This is but one example of the type of luxury and high touch services that this award-winning resort is standing by to offer you this year – and all within a ninety-minute drive of Montreal. Enjoy your perfect getaway in the country! I certainly did!

“At any given time throughout the summer at least 4 or 5 of our rooms are filled with Louise Penny fans” according to the Manoir Hovey’s  Managing Director, Jason Stafford.

So much so, in conjunction with the New York Times best selling author herself, the hotel has introduced a “Vive Gamache” package that allows guests to immerse themselves in the universe and landscapes of Chief Inspector Gamache’s adventures within the fictional village of Three Pines. In fact, her fourth novel, “ A Rule Against Murder” takes place at Manoir Bellechasse, a picturesque setting directly inspired by one of Penny’s many stays at Manoir Hovey. The package, which is available for $50.00 per couple, includes an autographed copy of Louise Penny’s latest novel; an upgrade upon arrival (subject to availability); a “Vive Gamache” mug and a copy of the Three Pines Inspirational Map to explore the Eastern Townships and its main influences and landmarks from the region. This is one case everyone can crack! 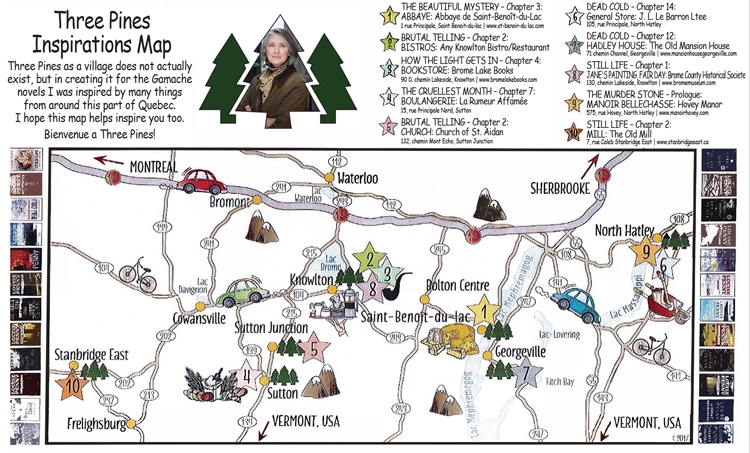