The Montreal Museum of Fine Arts (MMFA) is proud to present the first solo museum exhibition in Canada of Caroline Monnet, multidisciplinary artist of Anishinaabe and French heritage. Ninga Mìnèh (“the promise,” in Anishinaabemowin) lays bare the legacy of broken commitments to Canada’s Indigenous communities. In a unique visual idiom that combines building materials used on reserves with motifs inspired by Anishinaabe traditions and powerful exhortations, Monnet calls for a paradigm shift. 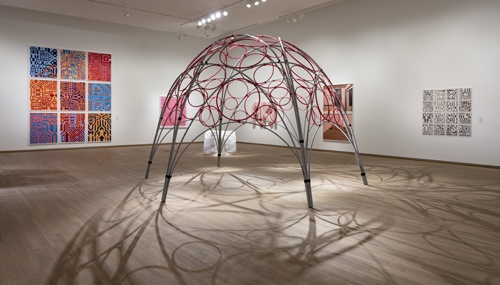 Ninga Mìnèh
Winner of a 2020 Sobey Art Award and the 2020 Prix Pierre-Ayot, Caroline Monnet is a major figure in the current Quebec and Canadian art scene. In her practice, the artist revisits schemas and canons of art history and history more broadly. With Ninga Mìnèh, she presents 18 recent works, most of which have never previously been shown, including a first in situ installation that highlights in ways both metaphorical and real, the precarious living conditions that the Canadian government has imposed on Indigenous communities under the Indian Act since it was passed in 1876.

Generally speaking, the housing on reserves – where certain communities subsist without access to drinking water – was hastily built using cheap materials. From the outside, houses often appear unfinished. Families live in overcrowded conditions, with the barest of comforts. To evoke the tenuousness of this situation, Monnet created works from construction materials like air barrier membranes, drywall and mineral wool.

“Caroline Monnet envisioned Ninga Mìnèh as a manifesto to denounce these living conditions that continue to exist in 2021 and to overcome widespread indifference, so as to effect change,” explains Sylvie Lacerte, exhibition curator. 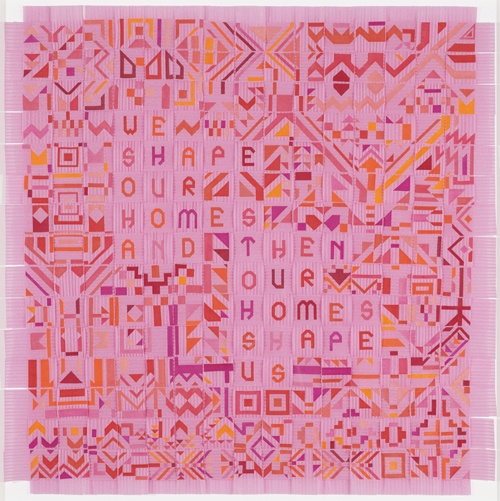 Caroline Monnet (born in 1985), We Shape Our Homes and Then Our Homes Shape Us, 2021, embroidery on sill gasket. Collection of the artist.
Photo MMFA, Jean-François Brière

“Using material as metaphor, Caroline Monnet creates a singularly powerful visual language that forces us to confront injustices suffered by Canada’s Indigenous communities. Monnet’s is work that strives to make a difference and we are honoured to be presenting her first solo exhibition at the Montreal Museum of Fine Arts,” adds Mary-Dailey Desmarais, Chief Curator, MMFA.

In her work, Monnet deliberately showcases materials used on reserves, transforming them and, in so doing, instilling a certain dignity in them. Polystyrene foam decorated in motifs created by the artist conveys the rich heritage of the Anishinaabe Nation while depicting an aerial perspective of an urban plan dividing up the lands. The air barrier membranes instantly evoke the beauty in a bird’s eye view of a village. In other works, base materials become the
feathers of the sacred crow or the ashes from that which has been forever destroyed. Monnet’s creations are also infused with hope and incite the viewer to reflect concretely on the future of Indigenous communities.

The in situ installation is composed of two structures erected in the centre of the exhibition gallery: Pikogan (Shelter) and It Cracks with Light. These hybrid architectural creations merge ancestral knowledge with contemporary construction techniques. Though distinct from each other, they are united in their complementarity: one of them, dome-shaped, looks toward the future while honouring traditional Anishinaabe structures; the other evokes the houses on reserves – small and compartmentalized, raw building materials exposed.

Through the formal allegory that is Ninga Mìnèh, Caroline Monnet makes plain the utter incongruity of third-world living conditions in a highly industrialized, developed country, while affirming the strength and resilience of Indigenous identity.

The exhibit continues until August 1, 2021
Visitors must book their tickets online and select the date and time of their visit. www.mbam.qc.ca