Spring has been particularly busy for the chair of the English Montreal School Board (EMSB), Joe Ortona. Since assuming office in September 2020, he has become a much sought-after community leader by the media for the strong positions he has taken on issues involving the governance of English public schools. His dossiers have been numerous and varied, ranging from implementing infrastructure and systems to make the school year safer during a pandemic to the more far-reaching legal challenges of Bill 21 and Bill 40.

How he came to be the top elected official at the board is a combination of deep roots in the community, legal training and a passion for defending the rights of the English-language minority in Quebec.

Giuseppe (Joe) Ortona’s childhood and teenage education years began in the schools he now serves. Born and raised in St. Leonard, he attended Nesbitt Elementary School (’93) and then completed his secondary studies at Vincent Massey Collegiate in 1998. His other, earlier, connection to the EMSB was a job as a vocational training technician, a position he held for 12 years in part-time and full-time capacities while pursuing his studies.

Along Mr. Ortona’s educational path was the three-year police technology program at John Abbott College in Ste. Anne de Bellevue, where he graduated in 2002. Instead of proceeding on to the police academy, he turned his attention to criminology, which he studied for several years at the Université de Montréal before deciding on the career change that would steer him into his current profession: law.

Mr. Ortona graduated in Civil Law, followed by Common Law, and earned his Juris Doctor from the University of Ottawa. He passed the bar in 2011 and has been working as a lawyer ever since. His professional experience includes working for the City of Montreal as a prosecutor, a position he held for five years after articling.

He now works as a criminal defense attorney in his own independent legal firm.

Mr. Ortona has been involved in supporting English schools and standing up for different human rights issues in the East End for many years. However, it was his participation in protesting the closure of a local police station (PDQ 45) that prompted community members to approach him to run in the school board election. He recalls elected officials in the municipal government telling him he would be a good representative for the community. And, when friends who were parents of school-age children in the English public school system encouraged him to seek office in the school board, he agreed. “I thought it would be something I would enjoy,” he said. “It turns out I was right.”

Mr. Ortona started his governance role with the EMSB in 2014 when he ran for election as school commissioner for Rivière-des-Prairies – and won. He held that position for six years and in 2018 also took on the position of Vice-Chair. He has been a member of the Advisory Committee on Transportation (where he sat as Vice-Chair), the Executive Committee and Chair of the Governance and Ethics Committee, and served as an EMSB representative of the Quebec English School Boards Association (QESBA). 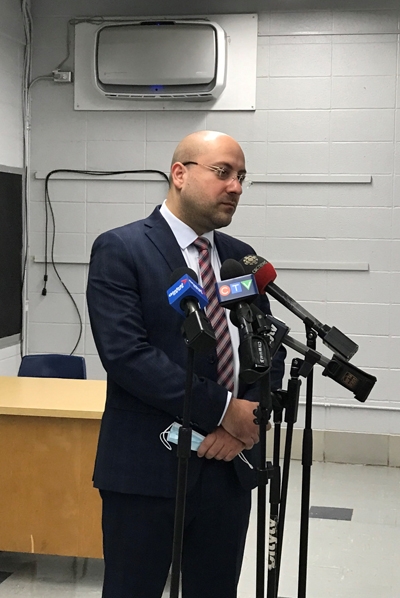 When schools opened for the 2020-2021 school year still amidst a pandemic, pressure mounted from parents to install air purifiers in certain schools.  “Immediately upon assuming office we heard that call from parents about purchasing air purifiers for schools without mechanical ventilation systems,” he said. “We took action without delay. Despite information released by the Quebec Public Health Department that the installation of portable air ventilators in classrooms was not recommended, we stood behind our decision to proceed, and by the end of January work on 29 buildings was completed.”

In late March, when the Quebec government issued a directive that senior high school students return to school full-time, the EMSB organized a staggered return to allow schools more time to plan for full in-school attendance, arguing that bringing back those students in the current model would not respect public health guidelines. The hybrid model ended up remaining in place.

Working on the legislative challenges

As a Board representative, Mr. Ortona has been involved in legislative matters over the years, particularly in the area of school board governance. He is a staunch defender of the constitutional right of the English-speaking minority and has advocated against Quebec legislation that seeks to interfere in the management of English public school boards. In 2016, he joined in a presentation to the Parliamentary Commission at the National Assembly to successfully counter Bill 86, “An Act to modify the organization and governance of school boards,” which would have restricted the community’s right to elect its own school board representatives.

Mr. Ortona was also involved in launching a court challenge against Bill 21, which bans religious symbols. Though the scope of the bill goes beyond schools, it interferes with the management of school boards, which includes the hiring of teachers, he said.

In April, the Quebec Superior Court struck down key provisions of Bill 21, a decision which was appealed by the provincial government. Though the law remains in place until a Quebec Court of Appeal hearing within the next year, Mr. Ortona maintains the EMSB argued successfully that Section 23 of the Canadian Charter of Rights and Freedom, which guarantees minority language educational rights to English-speaking minorities in Quebec, including the exclusive right of management and control of minority language schools. “Restrictions on hiring based on religious symbols is a violation of our right to manage and control our school boards,” he said.

Among some of his earlier accomplishments at the EMSB, Mr. Ortona points to getting rid of “outdated, old practices that hadn’t evolved up to standard.” An example, he said, was the abolishment of the selection committee, “which was political interference in the hiring process.” As chair of the Governance and Ethics Committee, he said “we updated and polished outdated codes of ethics and other by-laws that needed to be changed and made sure they were up to standard.”

Favourite parts of the job

Being engaged with the community, attending governing board meetings, witnessing the many positive things being done in the schools and working with involved parent volunteers are all aspects of the job Mr. Ortona says he has enjoyed. “Certainly, one of the favourite parts of the job is getting a sense that you are working for them, that you’re representing them,” he said.

Broadly speaking, Mr. Ortona said he will work to ensure minority rights are respected. “I’m a big, big defender of our section 23 right [of the Canadian Charter of Rights and Freedoms],” he said, adding he will continue to oppose Bill 40 and Bill 21, as well as school transfers. He also mentioned the board’s enrolment and his desire to boost those numbers. 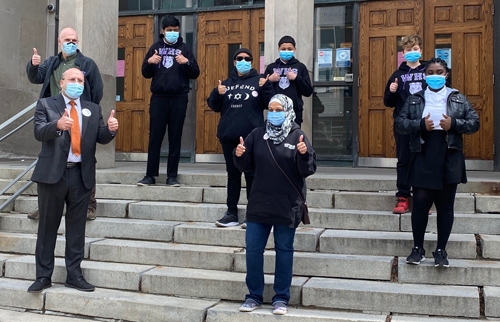 While the volunteers, mostly made up of parents, “know the community, and know the great things happening in the schools,” he said he would like to “get the message out there” about these successes in an extensive marketing campaign to the general population, especially to the families who are looking at the French or private sector.

“We have the highest success rate of any public school board in Quebec,” he said, and wants to counter the public perception that the private system is better. “Actually, compared to the EMSB, it’s not,” he said. “Based on our success rate vis-à-vis that of the private schools, there is a very small gap between the two. And, we provide educational services to everyone.”

Mr. Ortona also said it was going to be important to “start looking at governance of the board from a different perspective – a minority rights perspective.”

The EMSB was part of the recent legal challenge against the CAQ government’s Bill 40, a section of which seeks to transform all school boards into service centres – a reality already in place in French system. The Superior Court of Quebec heard the case in April after Bill 40 was temporarily stayed last fall.  A decision is expected before the end of the summer.

“It was debated in the courts on its merits,” Mr. Ortona explained. “Our hope is that once this is settled, the government will respect our constitutional rights to school board governance and leave the school boards to go on with the education of the children.

“Going to court is always the last resort,” he added.  “When we look at government funding for our school board, government regulations, the law, and all of the restrictions on where and how we can spend money, I think we need to be looking at it from a section 23 perspective and not just take it at face value that this is what the Ministry said and this is what it is. Rather, does it respect our right to management and control? Does this restrict us in any way from our section 23 rights? Is the government fulfilling those obligations? And making sure that they do.”

Mr. Ortona said this is the only way to ensure the adequate funding for educational and renovation projects, and special programs such as STEAM, advanced math and robotics, as well as transportation and bussing.

The EMSB finally has a unified Council of Commissioners, unlike the last mandate. “We’re here for the kids,” Mr. Ortona maintains. “We all know that good governance has a direct impact on student success.”

Mr. Ortona also had a shout out for all EMSB stakeholder: “Operating a school board during a pandemic is no easy task, and I would like to thank all staff, parents, students and volunteers for working above and beyond the call of duty.”