Government lockdowns have hit entrepreneurs hard. Stories abound of bars, restaurants, and salons being driven into bankruptcy and employees pushed into unemployment lines. Neil Malani, CEO of Axl Solutions isn’t having any of that. Rather than complain, the long-time contract manufacturer who splits his time between Hong Kong and Montreal decided to help fill emergency demand for personal protection equipment at Canadian schools, businesses, hospitals and government offices.

“Last year there was a sense of desperation at many points,” said Malani. “Worse, when we looked closer we found reports of suppliers charging outrageous markups of 500% and sometimes more. We made it our mission to provide affordable products made to the highest standards directly at Canadian facilities.”

Malani was born in Hong Kong. He grew up in a family business founded by his father, who became one of the first international investors to do business in Southern China after the region began to open its economy. He was thus in many ways ideally suited to jump on opportunities in the personal protection equipment industry.

“This pandemic isn’t just the government’s problem. It is everyone’s problem. That means we all need to do our part.” Neal Malani, CEO AXL Solutions.

Factories in Shenzhen and Waterloo

“Times like these bring out the best and the worst in people,” said Malani, who during his long career was involved in operations ranging from a furniture factory in Zhongshan to a plastic injection molding and electronics circuitry plant in Hui Zhou. “This pandemic isn’t just the government’s problem. It is everyone’s problem. That means we all need to do our part.”

Malani’s extensive business dealings in China meant that he had been following the outbreak since its early stages in Wuhan. He quickly realized its significance and by the time world media began to take notice, Malani had already set aside space to produce gloves, masks and wipes at a facility in Shenzhen, where one of his subsidiaries produces parts for Sony PlayStations. “It was a little tense at the beginning because the Chinese government was putting restrictions on personal protection equipment exports,” says Malani. “However we managed to stay under the radar.”

The situation, which highlighted Canada’s vulnerabilities in this area, led Malani to quickly set up a 20,000 square foot factory in Waterloo, Quebec; where 20 employees produce innovative Bacoban branded wipes under a manufacturing and distribution agreement with the German parent.

“The wipes, which are certified by the FDA (the U.S. Food and Drug Administration) and Health Canada provide long lasting surface disinfection for medical and sensitive areas,” says Malani. “They reduce cleaning time on surfaces, in part because they are larger than conventional wipes. That’s crucial for healthcare workers, who have been working in particularly stressful conditions.” Axl Solutions is currently negotiating deals with Amazon and Costco that will make Bacoban wipes available to the general public. There is talk of scaling the Waterloo facility up to 50 production staff by year end. “The indications are that the COVID situation is going to be with us for years to come,” says Malani, noting the limitations of current vaccines and the efficacy of mutant strains of the variants that are constantly emerging. In early May Ontario alone reported another 2,791 COVID-19 cases and 25 more deaths.

The ongoing trend is a particular worry in developing nations. Officials in India, where Malani is also helping to address the need for personal protection equipment, see no end to the current crisis, as COVID-19 infections continue to spread at alarming speed. “Even if they find a solution, it will be hard to re-establish trust among healthcare workers and much of the general public who will want to continue to take precautions.”

However it isn’t all about money for Malani, who has made large scale donations of masks, gloves and wipes to a range of institutions, including Honoré Mercier Elementary School in Saint-Leonard, where he was recently honored for his contributions. “I got a call from a contact who said that the school was scheduled to open in a couple of days but teachers were worried because they could not get access to the right personal protection equipment,” said Malani. “At that point we were beyond worrying about who was responsible for what. So we just sent the stuff over.” 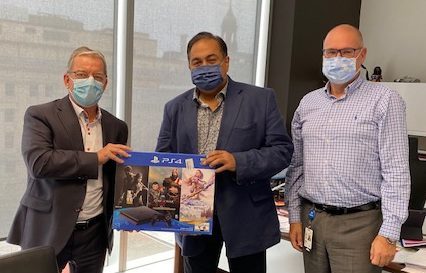 Malani also donated crates of Sony PlayStations to healthcare institutions to raffle off to workers as a way of thanking them for their efforts. “During my early years, it was always about building,” says Malani, who has interests in the United States, China, India and Europe. “But as you get older it becomes more about giving back.”

Malani’s foray into personal protection equipment is just the latest in a long line of opportunities that he was able to identify. One night after watching some U.S. entrepreneurs pitching InstaFire, new fire-starter technology on SharkTank he picked up the phone and reached out to the owners directly.

They quickly partnered to produce a compressed tablet known as the Fire Puck that could be used as a fuel source as well as a bio-mass stove used in cooking that would be sold in international markets. “The product is made from volcanic rock which has a more socially responsible footprint,” says Malani. He later appeared on SharkTank himself writing what he bills as the “largest purchase order” in the program’s history. “The product was good from start to finish, even the residue after burning can be used as fertilizer.”

During the past two years, Malani, who splits his time between Montreal and Hong Kong, identified an even bigger opportunity, this time on the personal front. “The challenges that Hong Kong has been facing in the wake of protests there have changed the city’s character,” says Malani. “Moving back and forth made me realize just how wonderful Montreal truly is. Canada offers so much potential for growth and quality of life. Now more then ever. So I decided to sell my house in Hong Kong and to base myself here permanently.”