One of the more surprising aspects of the late chef, author and TV personality, Anthony Bourdain’s new book “World Travel- An Irreverent Guide” (Ecco Press) is that there is, in fact, a new book by Anthony Bourdain!  Bourdain’s sudden death by suicide in June, 2018 shocked his fans (including yours truly) beyond belief. After all, how could a guy who once said “I have the best job in the world” decide to end it all at the peak of his game? 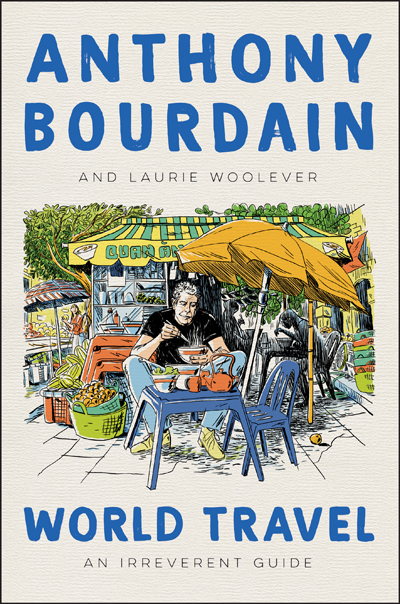 He was in the midst of shooting the final episodes of a new season of Parts Unknown for CNN; had a burgeoning book imprint featuring authors Bourdain chose as a publisher; had various writing and TV projects on the go; was a sought-after public speaker; was a doting father of a young daughter; in other words, he was firing on all cylinders. Then why end it all in a luxury hotel in the Alsace region of France? That question is certainly not addressed herein but Bourdain’s passion for world travel and his quest for both quirky and unique food emporiums scattered throughout forty-three countries are all found here. This is basically Bourdain’s “greatest hits” album as curated by his long-time assistant and co-author, Laurie Woolever.

As a previous co-author on Bourdain’s last book, “Appetites- A Cookbook” (Ecco Press) and someone who worked closely with Bourdain over a ten-year span, Woolever has the street cred to resurrect Bourdain, in a manner of speaking. The book’s format is predominantly a summary of many of Bourdain’s quotes from a twenty-year television career of travel and food shows and was conceived as a world atlas as seen through Bourdain’s eyes (and palate). With the blessing of Bourdain’s estate, Woolever has been entrusted to help perpetuate Bourdain’s legacy to his legions of followers.

Quite frankly, its’ release date could not come at a better time as pandemic-confined travelers find themselves chomping at the bit to get themselves back on an airplane to go just about anywhere. In addition, with travel budgets presently accumulating in their bank accounts, many can now afford some of those bucket-list destinations such as Oman (one of Bourdain’s personal favourites) Tanzania, and Ghana, for example, which are all featured in these chapters. What better way to plan out your next trip than by reading about where Bourdain has preceded you? 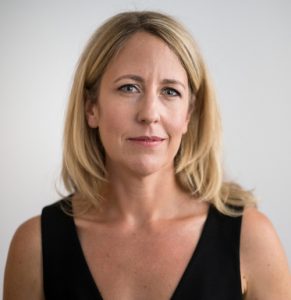 As with most travel books of this nature, I like to first check out what has been said about my own hometown, Montreal. Here Bourdain refers to a Schwartz’s smoked meat sandwich as the perfect pre-flight dish since it will lull you into a food coma for your long journey. Naturally his chef buddies David McMillan and Fred Morin of Joe Beef fame are treated with reverence as is Au Pied Couchon’s, Martin Picard. But when Bourdain suggests we all trek down to Pointe St. Charles’ Brasserie Capri to wolf down “marinated and boiled pigs knuckles” surrounded by banks video terminals and hard core beer consumers, I must say I was left scratching my head. I can only imagine what a well-dressed couple from Wisconsin following in Bourdain’s footsteps might wonder?  Perhaps the residents of Atlanta feel the same way when they read that The Clermont Lounge, a local strip club should be turned into “a national monument”. Here Woolever recounts an interview Bourdain did with “Blondie” who “at the time [was] in her mid-fifties and was still crushing beer cans between her breasts”. Caveat emptor: some of these destinations may not be to everyone’s taste and may be better read about than actually visited.

I happen to know Havana, Cuba fairly well so I wanted to see his take on that city since he had visited the island at a time when private businesses and restaurants were just finding their stride. Here Bourdain and Woolever feature Santy Pescador, a restaurant that is difficult to get to on the far outskirts of the city and set on the side of a river. While I do love this restaurant, there are many other paladares much easier to access within the city proper. Evidently, the more “parts unknown” the better, as far as Bourdain was concerned. A case in point was Bourdain’s dinner with then President Barack Obama in a tiny second floor diner in Hanoi, Vietnam where together they enjoyed a meal of bun cha, a Vietnamese “mixture of grilled pork belly and pork patties serves with herbs, chilis, rice vermicelli, and a spicy sour, fishy, sweet broth for dipping”. Sitting on plastic stools and downing beers straight out of the bottle seems to be the perfect counter-point to Bourdain’s own series of invitations as a diner at the White House. 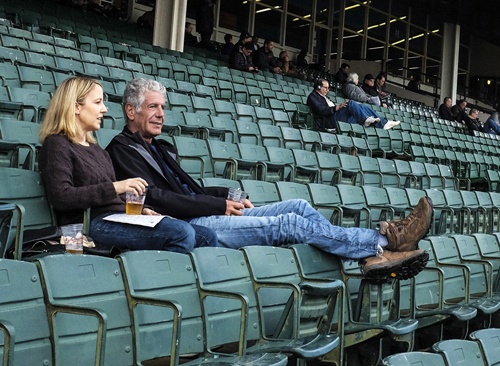 In her introduction, Woolever recounts that this book was originally sketched out during a single hour-long meeting at Bourdain’s New York City apartment (that he had decorated to imitate one of his favourite suites at Hollywood’s hotel the Chateau Marmont). This was followed by a few months of email exchanges on the project before his sudden death.

One of the reminders that this is intended to be a travel guide are complete addresses and phone numbers of the restaurants and hotels that are referred to in each chapter. Bourdain was also inspired by many classic and contemporary films when deciding on a destination or choosing the look of an episode. Therefore, it is fun to see an appendix listing these film references. What mystifies me is that each destination includes a paragraph about the relevant city’s airport and land transport into town. Given that most destinations are only allotted a few pages isn’t this information better served by other publications or information sources? More Tony, all the time, S.V.P.!

For those currently going through Bourdain withdrawal the good news is that Woolever is not quite finished with her boss’s legacy as she is also presently working on an oral biography featuring interviews with seventy-five people who knew Anthony Bourdain best and it is expected out later this year.

Gone but not forgotten! Man, we miss you, Tony!