On the eve of the ninth season of Top Chef Canada, returning to Food Network Canada on April 19 (10 pm), two Montrealers will be among the culinary talents trying to win it all. 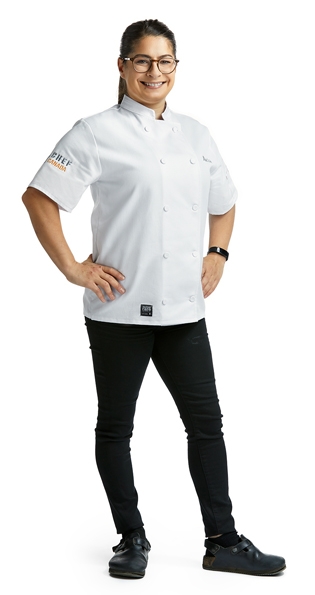 Ahuntsic’s Aicia Colacci and  Dollard-des-Ormeaux native Jae-Anthony Dougan will compete with nine other  fearless professional chefs from across the country; each bringing an unbelievable range of culinary styles, technical skill, and diverse breadth of flavours.The winner will take home a cash prize of $100,000 provided by Interac Corp. and a luxurious Lexus RX Hybrid Electric SUV.

“I am beyond thrilled!” Aicia said. “It was such an amazing privilege to get to know and cook alongside everyone. We all developed such an unforgettable bond.”

In the past year, the hospitality industry has faced adversity, forcing businesses to adapt and innovate quicker than ever before. This season’s competitors emerge with strong, fresh perspectives, and this incomparable season confronts and rises above the obstacles. The chefs contend with the pressure of the competition while facing weekly challenges featuring plant-based cuisine, celebrating local and seasonal ingredients, and a new twist on long-standing Top Chef Canada challenge Restaurant Wars, pivoting to Takeout Wars.

As for how she has handled the pandemic, Aicia says; “Overall quite good. There have been ups and downs, as expected, however there is a light and that makes me happy. I’ve had to slow down and re-route a bit, which I’m grateful for!”

Aicia grew up in an Italian household surrounded by amazing family recipes, which inspired her love for pasta-making. After five years as the Chef de Cuisine at Impasto in Montreal, she is now a private chef who sells her food online and hosts virtual cooking workshops. Aicia maintains she thrives under pressure and is ready to compete with the best chefs in the country to win the $100,000 grand prize, which she intends to put towards her new business hosting workshops, events and catering.

“I am a little feisty and definitely direct and I bring a lot of that to the kitchen,” Aicia says. “My dad is Italian and my mom’s side is Irish-French and food was always at the center of everything.”

Aicia says that between the ages of 20 and 23 she was working at an advertising agency. “I kind of told myself that there has got to be something better than this, so I enrolled in culinary school,” she said of St. Pius X Culinary Institute. “It was love at first sight.”

Jae-Anthony  is a self-taught chef and the owner of a number of restaurants in Montreal and a ghost kitchen in Ottawa. Exuding confidence and style in the kitchen, he defines his food as sexy, colourful and multi-textured. His drive resulted in the opening of two restaurants and the opportunity to cook for many celebrities. He says she is ready to change the culinary game, and prove to the judges that he has the ambition, grit and skill to become Canada’s first Black Top Chef.

“I started off a long time ago in my parents’ garage,” recounts Jae-Anthony. “I have not only owned two restaurants, but cooked for almost every celebrity you can think of in Canada. My grit comes from Black chefs not being recognized in the culinary field. I am here to literally change the game.”