After decades of public service as a Member of Quebec’s National Assembly and then as a Federal Member of Parliament in the House of Commons, Thomas Mulcair has successfully launched a new career as a political commentator in English and French print, radio and television media.

“I bring over forty years of experience to cut through the bullshit, to give people insight in the ‘why’ of current events that are affecting our daily lives.” In a short period of time, national, provincial and local media outlets in both official languages have snapped up Tom’s commentaries. He now has twice-daily appearances on Montreal’s CJAD Radio, a weekly appearance CTV’s noon news program, a weekly appearance in French on TVA’s La Joutte, and he writes columns for Maclean’s Magazine, the Montreal Gazette, and Le Journal de Montréal.

Tom is also a visiting professor in the Political Science Department at Université de Montréal. If this seems like a lot activity; it’s a comparatively relaxed pace compared to his previous daily routine as an MP, when his days ended at midnight and started again at 4:30 am; sending emails to colleagues, answering questions from his constituents, preparing for government committee work and for his presence in the House of Commons.

One of ten children, Tom is an energetic person and true to his principles. Tom is believer in social justice and has been a member of the NDP since he was 19, while still a student. His Francophone mother Jeanne Hurtubise taught school and his father Harry Donnelly Mulcair worked in the insurance business and was of Irish descent. The Hurtubise side of the family has a rich history in Quebec political life. His great-great grandfather was Honoré Mercier, the ninth Premier of Quebec. The historic Maison Hurtubise in Westmount was his grandfather’s home.

“My father worked for a large insurance company that decided to close their Quebec operation, making him unemployed overnight. He decided to obtain his own licence, and vowed that he would never work for someone else again, that he’d be self-employed. And so he did!” Continuing, Tom adds; “In our family, the five eldest went to English schools and the five youngest to French schools. I went to Laval Catholic High School and then to Vanier College for my CEGEP studies. My dad wanted me to go to Université de Montréal for my law degree, but even though I was bilingual, I believed that I’d do better in my studies if I went to McGill.” 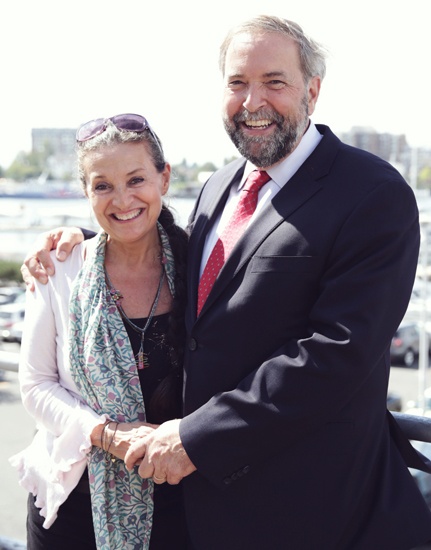 Enrolling in McGill’s law school at just eighteen, Tom excelled and graduated in 1977 with degrees in Common Law and Civil Law; thereby enabling him to practice law anywhere in Canada. In his final year at McGill, Tom was elected President of the McGill Law Students’ Association. With a hint at his future in politics, he was elected to the council of the McGill Student Union. No silver spoon for Tom Mulcair – he worked as a roofer and in construction to pay for his McGill tuition.

Tom met his future wife Catherine Pinhas at a wedding in Ste-Anne-des-Lacs in the Laurentians. “Catherine was from Paris and visiting relatives here. I was still a student and had long hair, as was the style in the 70s. We spent some time together and I knew that she was ‘the one’. She returned to France and I subsequently followed to meet her family.” Tom adds with a chuckle; “Even with my long hair – they accepted me.” Catherine and Tom married in 1976. Giving credence to the saying that if you want to learn a different language, fall in love with someone who speaks it; Tom said “My French soared with my relationship with Catherine.”

After he graduated, Tom secured a job with the Legislative Affairs branch of the Quebec Ministry of Justice and the young couple moved to Quebec City. As a psychologist, Catherine’s professional skills were portable during her early career. Tom later moved to the Legal Affairs Directorate of the Superior Council of the French Language. “In an effort to reduce spending in ’82-’83, the Quebec government decided to cut the salaries of the civil service by 20%. I spoke with Catherine and our sons Matt and Greg about the situation. It was the first of what would become family conferences that brought our family close together in a tightly knit group. I believed that I should not accept the pay cut, and that I should quit. Catherine and the boys supported me in that decision which we made as a family.”

The Mulcair family moved back to Montreal, and Tom became Director of Legal Affairs at Alliance Quebec. In 1985 he opened his private law practice on McGill College. “One of my clients was the Manitoba Government, who had been ordered to translate their laws into French. During this period, Tom also taught law courses to non-law students at Concordia University, Champlain College in Saint-Foy, Université du Québec-a-Trois-Rivières. In addition to his law practice, Tom was President of the Office des professions du Quebec from 1986 to 1993; where he initiated changes to make the disciplinary hearings transparent. He also was successful in having cases of sexual abuse handled decisively.

In 1994 Tom began his political career with the Quebec Liberal party; “It was the only Federalist option in Quebec politics”. He won the Chomedey riding in three successive provincial elections. As Minister of Sustainable Development and Parks, Tom initiated legislation to create a Sustainable Development Plan that was unanimously adopted in the National Assembly in 2006. As a supporter of the Kyoto Protocol, he also successfully amended the Quebec Charter of Human Rights and Freedoms to include the right to live in a healthy environment.

While serving as an elected member of the National Assembly, Tom also volunteered on the boards of The Montreal Oral School For The Deaf, Operation Enfant Soleil and the Saint-Patrick’s Society.

As a man of principle, Tom resigned his Cabinet position when he disagreed with the Party’s stance on a development in the Orford Provincial Park. Further, he served notice that he would not run in the 2007 provincial election.

Tom was immediately approached by the three major Federal parties. Still a member of the NDP and after meeting with Jack Layton, Tom agreed to run for the NDP and won a by-election for Outremont in September 2007. He was the only NDP Member of Parliament from Quebec. It was a happy time for Tom; “Being elected for the NDP was a return to my roots.” Little did anyone know at the time that the combination of Tom’s talent and organizational skills, coupled with Jack Layton’s charismatic presence, would launch the now famous Orange Wave that propelled the NDP into the Official Opposition in Ottawa.

“Tom is a natural communicator with a rare wealth of experience at provincial and federal levels. He seems happy to be unfettered and speaking his mind, and I think we’re lucky to have him.”  … Andrew Carter, CJAD

Jack Layton and Tom Mulcair became fast friends as well as colleagues. “His dad was my MP on the West Island. Campaigning with Jack was one-third party! Towards the end of the day, we’d sit out on a terrasse in the local equivalent to Montreal’s Crescent Street, and the town’s people would stop by and shake our hands and talk to us.” 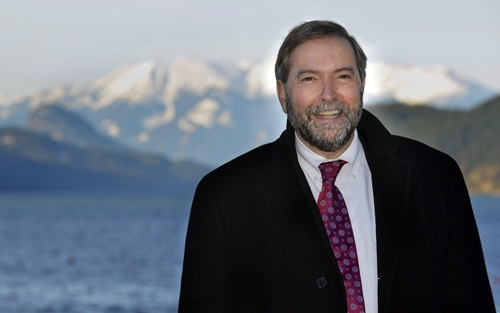 “Everything I did in politics involved my family. We’d have family meetings and discuss our options as a family. During a campaign, Catherine would meet me in Ottawa after working all week at her job. We’d fly to Toronto for a couple of events, and then continue on to Vancouver and perhaps Edmonton before returning to Ottawa and her continuing onto Montreal. And she did all this with me during a three day week-end! I’m really fortunate to have a super close-knit family.”

Having served with Alliance Quebec as well as amending Bill 101 while in the public service, Tom states; “I have been lucky to develop a deep understanding of both sides of the (language) issue. It’s perfectly reasonable for a Francophone to be able to receive direction in French. That shouldn’t mean that an Anglophone shouldn’t receive their instruction in English. That said – the English community in Quebec is in a tough place. We need a credible leadership.”

“Melanie Joly is doing a good job of handling the file; trying to hold onto symmetry across the country.”

What does concern Tom Mulcair is what he describes as “a vacuum of leadership” in the political parties and a “lack of competence and good management in the public service.”

However, he wouldn’t live anywhere else. “My career has taken me to over fifty countries, and Canada is by far the best country – in every aspect!”

On his integrity: “It’s the only way to get up in the morning and look at yourself in the mirror.”