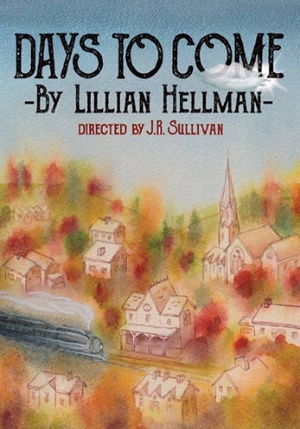 Lillian Hellman’s second play, Days to Come, is a family drama set against the backdrop of labor strife in a small Ohio town which threatens to tear apart both town and family. “It’s the story of innocent people on both sides who are drawn into conflict and events far beyond their comprehension,” Hellman said in an interview before Days to Come opened in 1936. “It’s the saga of a man who started something he cannot stop…”

“It’s a gripping, lucid examination of the dangerous intersection of economic, social, and personal forces.” The New Yorker

Andrew Rodman is running the family business and failing at it. The workers are out on strike and things are getting desperate. “Papa would have known what to do,” his sister Cora nags, “and without wasting time and money.” But it’s too late, Rodman is bringing in strikebreakers, naively failing to anticipate the disastrous impact that this will have on his family and their place in the community where they have lived for generations.

Audiences had no chance to appreciate Days to Come when it premiered on Broadway in 1936; it closed after a week. Hellman blamed herself for the play’s failure. “I wanted to say too much,” she wrote in a preface to the published play in 1942—while admitting that her director was confused and her cast inadequate. “On the opening night the actors moved as figures in the dream of a frightened child. It was my fault, I suppose, that it happened.” Nevertheless, “I stand firmly on the side of Days to Come.” In 1942, Hellman could afford to take responsibility for the play’s failure; she had enjoyed much success in the days after Days to Come (with both The Little Foxes and Watch on the Rhine.) But Hellman’s play is better than she would admit.

“Days to Come … turns out to be a gripping piece of storytelling, one whose failure and subsequent obscurity make no sense at all.”  The Wall Street Journal

Days to Come was revived only once in New York, in 1978, by the WPA Theatre. In reviewing that production for The Nation, Harold Clurman wrote that “our knowledge of what Hellman would subsequently write reveals that Days to Come is not mainly concerned with the industrial warfare which is the ‘stuff’ of her story for the first two acts.” Hellman’s real preoccupation is “the lack of genuine values of mind or spirit” of her principle characters, the factory-owning Rodmans.

Mint Theater Company’s Silver Lining Streaming Series is offering Free, On Demand Streaming of six productions from the Mint Archives over the next six months. To receive the password, click this link and complete the form.