Black History Month at the Met

Each day, a different encore presentation is being made available for free streaming on the Met website, with each performance available for a period of 23 hours, from 7:30 pm ET until 6:30 pm the following day.

During the 2019–20 season, one of America’s greatest operas returned to the Met stage for the first time in 30 years, with the premiere of James Robinson’s vibrant new production of Porgy and Bess. In this Live in HD transmission, bass-baritone Eric Owens and soprano Angel Blue star in the title roles, headlining a phenomenal ensemble cast. The performance also features soprano Golda Schultz and bass-baritone Donovan Singletary as Clara and Jake, soprano Latonia Moore as Serena, and tenor Frederick Ballentine and bass-baritone Alfred Walker as Sportin’ Life and Crown. And as the community matriarch Maria, veteran mezzo-soprano Denyce Graves delivers a scene-stealing performance. David Robertson conducts this beloved score, which includes a number of melodies that have become classic American standards.

Verdi painted an immense canvas with this dark but tuneful opera, vividly brought to life in John Dexter’s production, with sets by the great Eugene Berman. The legendary Leontyne Price is seen in one of her greatest roles, Leonora. Price’s soaring voice encompasses every nuance of Leonora’s emotion as she moves from joy through resignation to ultimate heartbreak. James Levine’s brilliant leading of the Met orchestra and chorus is a lesson in Verdi style. Giuseppe Giacomini is Alvaro, the man Leonora loves, and Leo Nucci is Don Carlo, the dark instrument of their Fate. 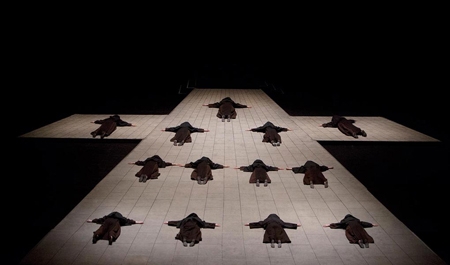 In this legendary production, director John Dexter and designer David Reppa brilliantly captured the stark drama of Poulenc’s only full-length opera, which tells the story of a group of nuns caught in the maelstrom of the French Revolution. Maria Ewing is Blanche de la Force, an aristocratic novice who flees her convent when it is desecrated, only to return and join her fellow nuns as they are led to their execution. The legendary Régine Crespin, in her final Met appearance, is Madame de Croissy, the prioress whose agonizing death haunts Blanche. Jessye Norman sings Mother Lidoine, the new prioress, and Florence Quivar is the comforting Mother Marie. French maestro Manuel Rosenthal conducts. 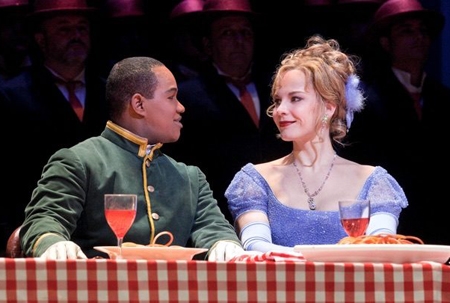 If ever a composer was born to set the enchanting fairy tale of Cinderella to sparkling music it was Rossini. His much put upon heroine Angelina (Elīna Garanča) has to cope not only with nasty stepsisters, but also an over-the-top, farcical father, Don Magnifico (Alessandro Corbelli). And in this version the Prince (Lawrence Brownlee) and his valet (Simone Alberghini) swap identities, which causes no end of delightful confusion. With Cesare Lievi’s delightful storybook production and Maurizio Benini’s expert conducting, it’s all as light and delicious as a marvelous musical soufflé.

From the “James Levine: Celebrating 40 Years at the Met” DVD box set. Jean-Pierre Ponnelle’s landmark production of Mozart’s most human comedy provides the perfect setting for this superb cast under James Levine’s ebullient leadership. The philandering and arrogant Count Almaviva (Thomas Allen) is no match for his wily servant Figaro (Ruggero Raimondi), whose soon-to-be-wife Susanna (Kathleen Battle) is as manipulative as she is charming. Add in one beautiful, disillusioned Countess (Carol Vaness) and one irrepressible, testosterone-laden teenage boy (Cherubino, played by Federica von Stade), and it’s no wonder some critics say this is the perfect opera. 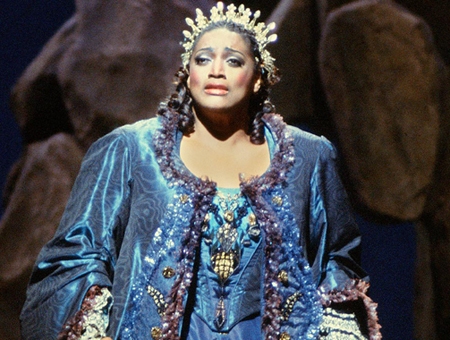 Jessye Norman is a regal Ariadne, the mythological Greek heroine in this opera-within-an-opera, opposite the passionate Bacchus of the great James King. Kathleen Battle delivers the coloratura fireworks of Zerbinetta, the leader of a commedia dell’arte troupe that finds itself stranded on Ariadne’s island. Tatiana Troyanos and Franz Ferdinand Nentwig star as the young Composer and the Music Master in the opera’s prologue. James Levine brings out all the color and charm of Strauss’s brilliant chamber-sized score with its equal amounts of pathos and humor. Bodo Igesz’s production features sets by esteemed designer Oliver Messel. 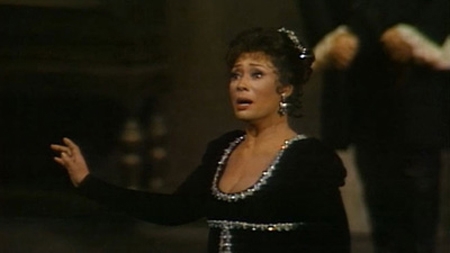 A stellar cast brings Puccini’s spellbinding opera to life, seizing every opportunity to thrill the audience. Luciano Pavarotti is Cavaradossi, the painter and political revolutionary in love with the beautiful and famous singer Tosca (the riveting Shirley Verrett). Rome’s diabolical chief of police, Baron Scarpia (Cornell MacNeil), wants Tosca for himself—but he underestimates the fury of a woman in love. With torture, murder, and a suicide in its final moments, Tosca packs more dramatic punches than most other operas—and this classic telecast captures them all. James Conlon conducts in a production by the incomparable Tito Gobbi, one of the great Scarpias of the 20th century.

Robert Lepage’s landmark staging of Wagner’s Der Ring des Nibelungen, unveiled over the course of the 2010–11 and 2011–12 seasons, was the first new Met production of the complete cycle in more than 20 years. Combining state-of-the-art technology with traditional storytelling, it brings Wagner’s vision into the 21st century. In this first part of the epic, the theft of the Rhinegold treasure sets in motion the course of events that will change the world and end the rule of the gods. Met Music Director James Levine conducts a cast of some of the greatest Wagnerian singers of our time, including Bryn Terfel as Wotan, Stephanie Blythe as Fricka, and Eric Owens as Alberich.

Pier Luigi Samaritani’s romantic production beautifully captures the sweep and passion of Verdi’s music. With James Levine’s marvelous conducting, this cast makes a spectacular case for Verdi’s opera. The great Luciano Pavarotti is at his stunning best in the title role as the wronged nobleman turned bandit. A beautiful and heartbreaking Leona Mitchell is Elvira, the woman he loves. But she is also pursued by two other men: King Don Carlo (Sherrill Milnes in one of his greatest roles) and her aged guardian, Don Ruy Gomez de Silva (a superb Ruggero Raimondi). 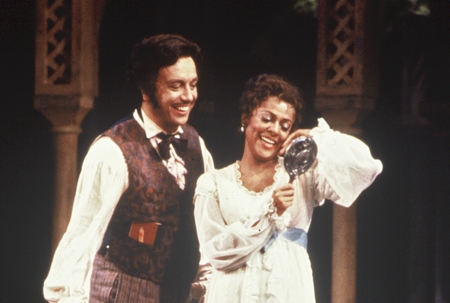 With its hilarious hijinks and vocal virtuosity, Rossini’s madcap comedy always proves a delightful treat. For this 1988 telecast, the Met assembled a cast capable of tackling both the musical and physical challenges of this bel canto farce, seen here in a whimsical production by John Cox. From the moment he takes the stage with Figaro’s iconic aria “Largo al factotum,” Leo Nucci combines winning charm with a robust baritone. Soprano Kathleen Battle tosses off one glittering vocal display after another as the feisty Rosina, while tenor Rowell Blake makes for an ardent Count Almaviva. Ralf Weikert conducts the lively performance, which also includes the comic duo of Enzo Dara as Dr. Bartolo and Ferruccio Furlanetto as Don Basilio.

This atmospheric production by Piero Faggioni, conducted by James Levine, captures all the brooding power and elegance of Verdi’s drama of love and politics. Luciano Pavarotti stars as Riccardo, the unlucky ruler in love with his best friend’s wife, Amelia (Aprile Millo). Leo Nucci is the husband torn between loyalty and his thirst for revenge, and Florence Quivar sings Ulrica, the fortuneteller who prophesizes the tragic ending. 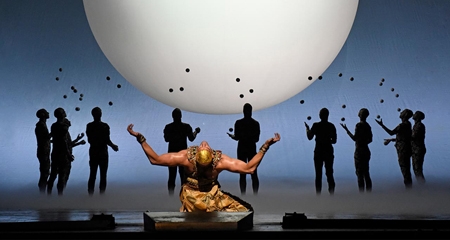 One of the biggest hits of the 2019–20 season, Philip Glass’s Akhnaten is the third installment in the composer’s Portrait Trilogy focused on revolutionary figures from world history. Starring as the ancient Egyptian pharaoh who attempted to radically alter his society, countertenor Anthony Roth Costanzo headlines this performance from the Live in HD series. In her Met-debut season, Karen Kamensek conducts the hypnotic score, leading a cast that also features soprano Dísella Lárusdóttir as Queen Tye, mezzo-soprano J’Nai Bridges as Nefertiti, and bass Zachary James as Amenhotep I. Phelim McDermott’s endlessly inventive production fills the Met stage with breathtaking visuals, including virtuosic pattern-juggling routines by Gandini Juggling.

Berlioz’s colossal masterpiece requires stupendous forces—dozens of soloists, enormous chorus, orchestra and ballet, a superb conductor who understands the uniqueness of the score—plus a production that does visual justice to the work. “A stupendous achievement” was one critic’s assessment of Peter Wexler’s inventive production. And with James Levine’s wizardry galvanizing the marvelous all-star cast, this is truly a gem. Plácido Domingo is the legendary hero Aeneas, Jessye Norman the obsessed prophetess Cassandra, and Tatiana Troyanos is Queen Dido, who commits suicide when Aeneas leaves her. 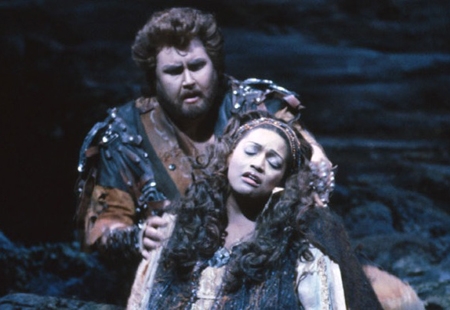 The gorgeous and evocative Otto Schenk/Günther Schneider-Siemssen production continues with this second opera in Wagner’s Ring cycle. Hildegard Behrens brings deep empathy to Brünnhilde, the favorite daughter of the god Wotan (James Morris) who nevertheless defies him. Morris’s portrayal of Wotan is deservedly legendary, as is Christa Ludwig, as Fricka. Jessye Norman and Gary Lakes are Sieglinde and Siegmund, and Kurt Moll is the threatening Hunding. James Levine and the Met orchestra provide astonishing color and drama.