Last month we told you about the return of Reuben’s Deli & Steakhouse (reubensdeli.com) under the Deville Dinerbar (www.devilledinerbar.com) roof on Stanley Street. Now, the Tzemopoulos family have revived Anton & James, which had a storefront across the street in the same One Kitchen format. 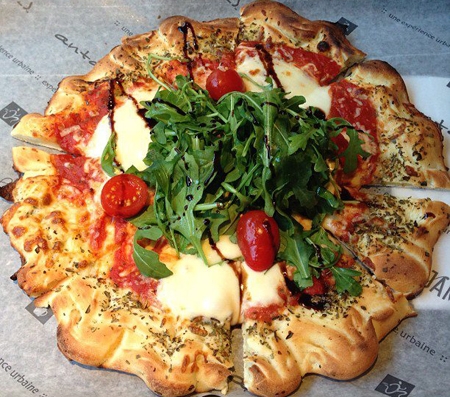 One of the delicious Anton & James pizzas.

I had never tried Anton & James before, so I was curious. It was interesting to note that in the ensuing weeks since my Reuben’s pickup I could see for myself how much business has grown. First off there was a social distanced lineup at the front and when I got to the front to pick up my order I could see a multitude of bags being placed on tables. Good for the brothers! (Publisher Peter Kerr was so intrigued by my Reuben’s review that he too headed down there for some well-appreciated smoked meat sandwiches).

Anton & James was launched as a trendy New York-styled café, with great pizzas and sandwiches.

Adam tells me that this concept will likely remain under the Deville roof, even after the pandemic is over. Once again I made an order to last me a few days, starting with three of their thin crust pizzas. Tomato and Basil comes with mozzarella, grape tomatoes and fresh basil; the Reuben’s MTL Smoked Meat contains mozzarella, mushrooms, julienned peppers, dry cured pepperoni (which I opted out of) and chopped smoked meat; and the BBQ Chicken has mozzarella, roasted chicken basted in BBQ sauce and  caramelized onions. I also ordered the Sweet Mac & Cheese, which made for a splendid lunch the following day and their thin and crispy French Fries. To wash it all down I had a Stewart’s black cherry soda and yes, I could not resist a piece of the Deville apple pie for dessert.