In honour of their 20th anniversary, Kleztory is launching their aptly-named sixth album; Momentum, under the Amerix Artists and Chandos Records labels. Amerix covers the Canadian market, while the prestigious British company Chandos Records handles international distribution in more than 50 countries. This is significant achievement for the five band members and their manage Marc Lebel, who is considered to be Kleztory’s sixth member.

During my conversation with Airat, he said; “Marc Labelle is more that a manager for us – he’s part of the group. He’s a mentor for us. It was Marc’s idea to place microphones inside our instruments for this recording, and that has given an exceptionally warm sound to our instruments.”

It’s useful to return to the beginning, when Airat Ichmouratov and his wife Elvira Misbakhova came to Canada twenty-two years ago with not much more than their musical instruments and a whole lot of talent. Airat with his clarinet and Elvira with her violin. Trained in Russia, the couple was steeped in the strict disciplines of classical music. To make extra money, they often performed in the Metro and in the streets of Montreal during the summer.

While working in an orchestra, the bass player asked Airat if he’d like to join a klezmer band. “I’d always wanted to play that music, and here was a chance to join an existing band. As classical musicians, it took Elvira and me a while to get used to the improvisation of klezmer music. The band member evolved to the five musicians we are today.” 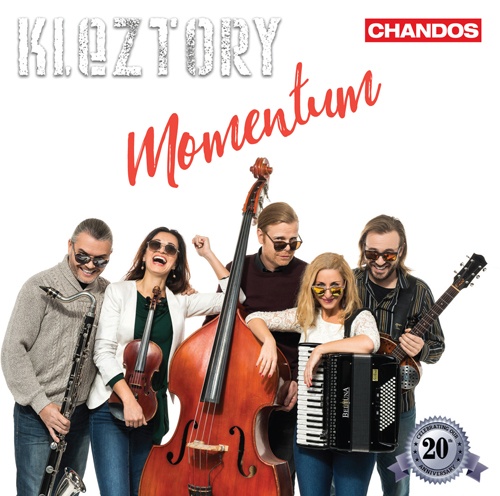 Founded in 2000, Kleztory began their joyful and extraordinary journey by traveling all over Quebec, performing in numerous festivals, theatres, cafés and small venues. In the years since, the ensemble has played about 1,000 concerts in Canada, the United States, the Netherlands, France, Germany, Austria, Belgium, Romania, Brazil, Mexico, Norway, Switzerland, Hungary, Costa Rica and China.

“We made a homemade recording in 2001 and played it for Yuli Turovsky, founder of I Musici. Yuli loved it, and that day my life changed. He told me that we wanted to record klezmer music with I Musici, and had not found a suitable band to work with.”

“Yuli asked me I knew how to write chart music for strings – so that we could provide sheet music for the musicians of I Musici.” With a chuckle, Airat adds; “I didn’t know how – but I said ‘yes’ and then very quickly learned how write music for strings. I wasn’t going to miss this opportunity!

This album features Kleztory’s best tracks. “We selected 10 songs from our repertoire, audience favourites that we have enjoyed playing over the last 20 years, as well as a few more recent pieces,” explains Ichmouratov. “This is a special and important event in the life of an ensemble. We decided to present the songs in a different way with a slightly different feel and add touch of jazz to enrich our repertoire. So we rearranged the pieces and recorded them “live” in the studio, accompanied by a string quartet and two excellent jazz musicians: improvisational pianist David Ryshpan, and percussionist Bertil Schulrabe.”

Since its European release on October 30, Momentum has been getting excellent reviews, especially from the two BBC radio stations in England. “Like our Klezmer album in 2004 with the I MUSICI de Montréal Chamber Orchestra under the direction of Yuli Turovsky, I believe that this project will enable us to build new relationships on the national and international scene,” adds Airat Ichmouratov, winner of the 2020 Charles Biddle Award.